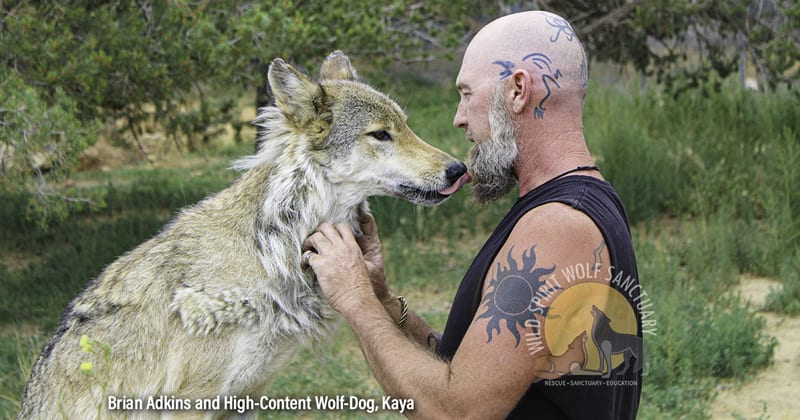 This content has been archived. It may no longer be relevant

For thousands of years, wolves and humans have vied for the top spot of apex predator—to become the species to sit at the peak of an ecosystem’s food chain. Despite the competition, however, eventually certain, less fearful wolves began to approach human encampments. While the exact cause for wolf domestication remains a debatable topic within the scientific community, these more courageous and curious wolves became the predecessors to the now domesticated subspecies of the grey wolf affectionately known as the domestic dog. 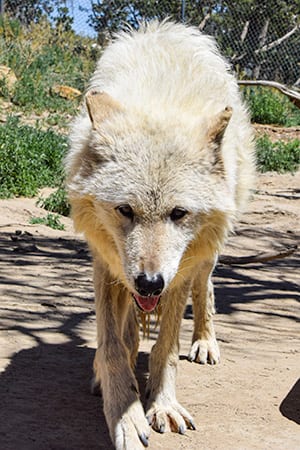 In the epoch since this convergence, humans and wolves have grown apart. Within the United States, there is much hate towards many predators, and depredation efforts have catastrophically wounded predator populations, including those of the wolf. Despite the often misguided hatred towards wolves, exacerbated by misinformation and a lack of understanding the species, wolf-dogs as pets have been increasingly popular all over the world. Within the U.S., there is an estimated 250,000 wolf-dogs living as pets. Popular reasons for ownership include as “guard dogs,” trophy animals, and the commonly (and debatably purposeful) misinformed notion that wolf-dogs will be a more loyal pet than a domestic dog.

Wild Spirit Wolf Sanctuary does not promote nor condone the practice of owning wolf-dogs as pets. For more information on the wolf-dog itself and why Wild Spirit Wolf Sanctuary maintains the stance that it does, I highly suggest reading our article, “Why Wolf-Dogs Don’t Make Good Pets.” Regardless of our stance, legislation with respect to the ownership of “wolf hybrids” is inconsistent from state-to-state, county-to-county, and even city-to-city. In this article, we will cover the different approaches governments have taken to regulate wolf-dogs, potential reasons behind this legislation, and trends throughout the states.

Not all laws surrounding the regulation of wild animals, their offspring, or the mixed breeding with domestic animals are created equal. In fact, it would seem that the definition of what a “wild animal” is differs from state-to-state. At a federal level, a wolf-dog is considered to be a wolf dog. According to Cornell Law, “[a] Hybrid cross means an animal resulting from the crossbreeding between two different species or types of animals. Crosses between wild animal species, such as lions and tigers, are considered to be wild animals. Crosses between wild animal species and domestic animals, such as dogs and wolves or buffalo and domestic cattle, are considered to be domestic animals.” Within this same set of definitions prescribed by the Department of Agriculture, a wild animal is “any animal which is now or historically has been found in the wild, or in the wild state, within the boundaries of the United States, its territories, or possessions. This term includes, but is not limited to, animals such as: Deer, skunk, opossum, raccoon, mink, armadillo, coyote, squirrel, fox, wolf.” 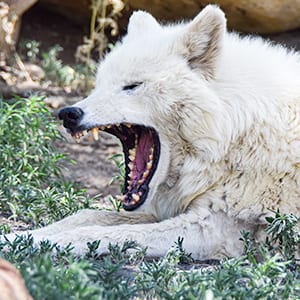 When comparing the definitions, it leaves a lot up for debate with variations in how a governing body may interpret how to classify and regulate the wolf-dog. This resulting grey area around the proper classification of a wolf-dog, according to federal definitions, leads to inconsistent laws throughout the union.

If we are to strictly adhere to the definition of a “hybrid,” a wolf-dog would be considered a domesticated animal regardless of content level. However, under the Endangered Species Act, any animal over 97.99% wolf to dog is considered to be a wolf and therefore protected as such. If we lean on the definition of what a wild animal is instead of a hybrid, we can safely argue that a wolf-dog could be considered a wild animal. The classification of a hybrid, however, (at least one crossed between a domesticated animal and a wild animal) is not one that is used in every state. While some states, like Utah, adhere to this regulatory precedent, other states do not. An example is Georgia, which describes a wild animal as “any animal which is not wildlife and is not normally a domestic species in this state. This term specifically includes any hybrid or cross between any combination of a wild animal, wildlife, and a domestic animal. Offspring from all subsequent generations of such crosses or hybrids are wild animals.” Despite this definition, Georgia is not one of the states that has banned the ownership of wolf-dogs despite their classifying them as “wild animals.”

A common practice of regulation, if the state does not default to standard domestic dog laws, is requiring a permit for wolf-dog ownership. The permit process varies from one step harder than for your standard dog, to specific permission with extremely strict enclosure requirements making it almost impossible for the average person to comply. An example of the latter is Arkansas. They have provided very detailed outlines that owners must abide to legally own a wolf-dog. These outlines include: public records of health and welfare for each animal; strict enclosure requirements, including precise specifications on space, construction, and number of animals per enclosure; and provisions for diet describing the ratios of meat and protein to starches. Furthermore, all of the above is subject to inspection, and at the cost of the owner. These laws are in place to protect the animals, the people living in close proximity to wolf-dogs, and to likely dissuade the average citizen from ownership of these special needs animals. 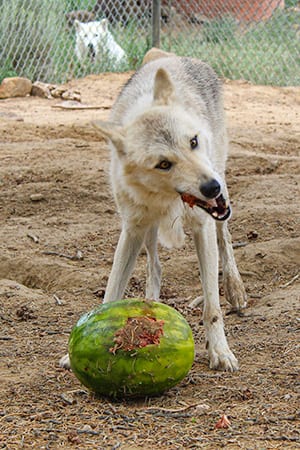 It is quite common for states to define wolf-dogs as “wild animals,” “dangerous dogs,” or “dangerous animals,” which they do in Connecticut, stating “For the purposes of this section, the following wildlife, or any hybrid thereof ([The canidae, including, but not limited to, the wolf, and coyote]), shall be considered a potentially dangerous animal[.]” While Connecticut has banned the possession, sale, or trading of the animals above, many other states have opted out of directly regulating wolf-dogs by placing it on the municipal level’s responsibility, as they do in Virginia where at a state level it is legal but the state then provides rather comprehensive “suggested” protocols for the regulation of wolf-dogs.

Major cities like Denver, Colorado and Albuquerque, New Mexico have outright banned ownership of wolf-dogs, and in the case of Albuquerque, the city requires all animals suspected of being wolf-dogs to be euthanized. As many shelters throughout the U.S. do not usually have the resources to test or phenotype accurately, many domestic dogs are put down due to misinformation or fear founded on a lack of understanding, especially in cities or states where it is mandatory that suspected wolf-dogs are euthanized.

While the trend seems to be heading towards wolf-dog ownership becoming illegal in more areas throughout the U.S., there are still too many states, counties, and cities choosing to avoid regulation for one reason or another. Below is a graphic outlining how the states within the U.S. are regulating wolf-dog ownership as of 2020.

Graph: Wolf-Dog Ownership Laws in the US

I have personally experienced the lack of information and resources available to humane societies and shelters firsthand when confronted with what the shelter thought was a wolf-dog due to small behaviors (i.e., howling). The shelter staff were afraid that they would have to euthanize the animal suspected of being a wolf-dog, which again is mandatory in the city of Albuquerque where I was in the process of adopting my own pet dog companion. Yet, the animal I was observing on the other side of the glass was very likely an Anatolian Shepherd mixed with either a Malamute or Husky (both of which are quite vocal and howl a lot). Thankfully, after discussing my observations and how I went about phenotyping the animal, the dog was spared. However, had the shelter not had this information or access to such valuable information, the large dog would have faced a fate that many dogs of that breed mixture do: fear, prejudice, and/or death. 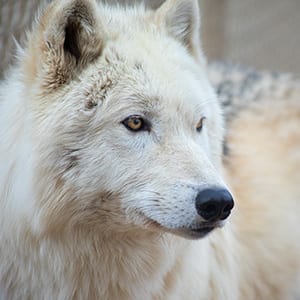 While the intent of allowing smaller governing bodies to make their own rules to protect the animals and people under their jurisdiction is fair, it does unfortunately rely on each county and/or city to have the necessary resources to make informed decisions. The trend is that more and more cities and counties are moving to ban the ownership of wolf-dogs altogether, but without proper education the bans are fueled by fear rather than respect and understanding. This unfortunate truth does not fix the problem, and it often creates the new problem of domestic dogs being abandoned, dismissed, and/or killed.

Wild Spirit Wolf Sanctuary’s mission is to rescue, to provide lifetime sanctuary, and to take the time to educate the public on proper wolf-dog identification and the adequate care of this unique species. We hope that in the future, because of our academic pursuits, we will no longer have to rescue and provide sanctuary to wild animals that prove to be time and time again ill-suited to a normal human home. We look forward to and support a world where, regardless of what the legal definition is, people know that a wolf-dog is inherently part wild animal and therefore has the potential to be dangerous in a domestic setting. This, of course, is not because wolf-dogs are vicious and dangerous animals but because they cannot usually be satisfied in the average human home.

We hope that our readers can learn along with us as we continue to pursue our mission and vision. Check your local laws, and consider becoming an ambassador for the animals Wild Spirit Wolf Sanctuary rescues and cares for every day as a result of the exotic pet trade. Question how your legislators came about their decisions to create laws as they apply to wolf-dogs, and ask that they regulate wolf-dogs from the perspective of compassion and education rather than fear and misinformation. I leave you with a great quote from U.S. Fish and Wildlife to consider:

“It took many thousands of years for humans to selectively breed canines for the traits that make modern-day dogs such delightful companions: congeniality, flexibility, and eagerness to please. It is simply impossible to instill these traits in a wild animal overnight. Many an unsuspecting wolf lover has purchased a wolf pup, only to find that it is largely untrainable (since it does not care much about pleasing its owner), and that as it grows into adulthood it becomes unpredictable, if not downright dangerous, especially around children and small animals. Many such animals end up living miserable lives on the end of a chain after a frustrated owner gives up on trying to care properly for the animal. When such an animal is cornered or frightened and reacts by attacking a human – – often a small child – – the incident reinforces the common misconception that wolves are bloodthirsty and aggressive creatures.

Some wolves and wolf hybrids do fare reasonably well with conscientious owners who are knowledgeable and well-prepared to deal with the special needs of their animals. Meanwhile, however, animal shelters are overflowing with gentle, obedient dogs of all sizes, shapes, and colors that must be killed if no homes are found for them. Given this fact, the growing trade in captive wolves and hybrids is tragic and unnecessary.”

If you’re interested in learning more about your state’s laws, visit www.hybridlaw.com for more information.

← Prev: Welcome, Kenai! Next: Farewell, Crystal →
You May Also Like…