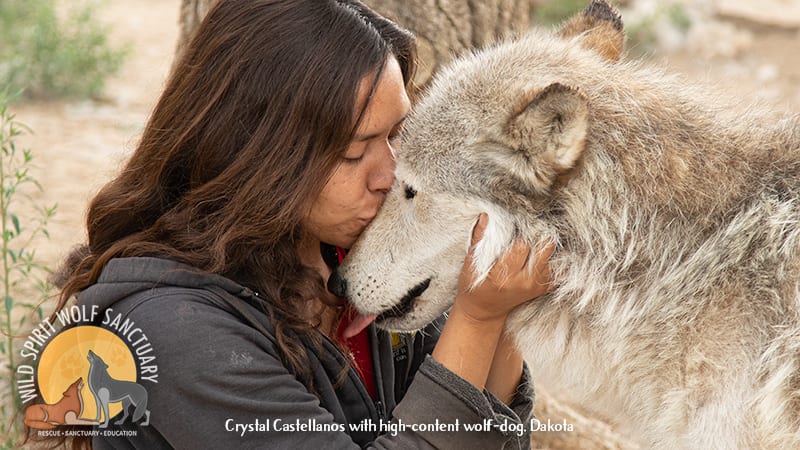 Kendra is our Grant Coordinator and Copy Editor, as well as an Animal Care Specialist. She is an animal behavior enthusiast, greatly enjoying the impactful relationships possible through training as a means of communication and building trust. Through her love of writing, Kendra hopes to further support the wild rescues of Wild Spirit Wolf Sanctuary.

Crystal Castellanos, Director of Operations at Wild Spirit Wolf Sanctuary since November of 2018, and member of the team since 2011, is effectively ending her chapter dedicated to the sanctuary this Friday, August 7th, to pursue her next chapter, which will be set in the tropical state of Hawai’i. Long-term supporters and followers of Wild Spirit Wolf Sanctuary have watched as Crystal grew into an integral part of the lives of the rescues, and anyone who watches her interact with the animals can see her attentiveness, respect, compassion, and love. Undoubtedly, there are rescues who absolutely adore Crystal—Flurry, Naia, Kota, and Powder are just a couple of names that rush to mind as kiddos who have greatly benefited from her caregiving over the years.

While it is always bittersweet to face endings, please join the Wild Spirit Wolf Sanctuary Team in wishing Crystal all the best in her new beginning with husband, Ramon Castellanos, another long-time member of the Wild Spirit Wolf Sanctuary family. May they not only enjoy the warmth and beauty of all Hawai’i has to offer, but may they face and welcome new challenges, excitements, and opportunities.

To celebrate, I have asked Crystal a few questions to share with our dear readers. Please enjoy!

What inspired you to first seek out a volunteer position at Wild Spirit Wolf Sanctuary?

After attending the grand opening of the Candy Kitchen Trading Post located across the street from the sanctuary, Ramon and I were driving back to Albuquerque, New Mexico where we were living. During the drive, we talked about the strong pull to move out to the area. The next day, I messaged Leyton J. Cougar, Executive Director at the time in 2011, asked if he remembered me, and I was told to apply right away. We moved out within a month of that message, and I met with Leyton just a couple days after we moved where he took me around each morning and we discussed canine behavior.

Can you share one or two of your favorite memories?

Memories with the Animals: 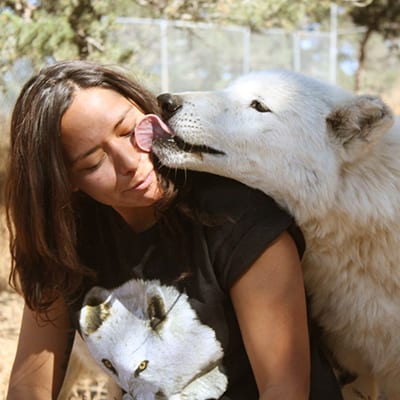 What has been the greatest lesson you have learned while living and working at Wild Spirit Wolf Sanctuary?

The greatest lesson I have learned while living and working at Wild Spirit Wolf Sanctuary is that there is more to each of us. All of the rescues, staff, and volunteers who call or have called the sanctuary home have grown and changed by the time spent here. I’ve seen rescues arrive petrified and traumatized by their past experiences to become social and trusting over time. I’ve seen volunteers arrive without certain skills or knowledge, for example, cooking, and I have watched them become avidly conscious of their diet and nutrition. I’ve learned that you can’t judge a book by its cover. I’ve also learned that the animals communicate to us if we’re open to listening to them.

What has been the most challenging aspect for you as someone living and working at Wild Spirit Wolf Sanctuary?

The most challenging aspect for me as someone who has lived and worked at Wild Spirit Wolf Sanctuary was the inability to fully separate work-life from personal-life, especially when I was living communally with everyone, which was up until around 2017.

What will you miss most after you leave?

I will miss the fur-kids the most. I have developed so many relationships with a lot of the senior population, so it will be hard to be away and watch them cross the rainbow bridge from afar. I also have to say that I will miss autumn—always too short, but it always brought the tarantulas; winter—it’s so beautiful, and the wolves and wolf-dogs love winter; monsoon season—I always loved the way the thunder shook the ground, waking the toads at Raven’s Pond; and the New Mexico sunrise and sunset—unreal!

Any parting words for your team or Wild Spirit Wolf Sanctuary supporters?

Crystal Castellanos was originally an accredited dog trainer before becoming a general volunteer at Wild Spirit Wolf Sanctuary when she arrived in June of 2011. She joined the Animal Care Team after passing her tests on August 18, 2011. Several years later, Crystal was promoted to Lead Volunteer in the Animal Care Department, and then in January of 2014 she advanced to become the Assistant Director, working closely alongside Leyton J. Cougar, Executive Director of Wild Spirit Wolf Sanctuary from 2003 until 2018. Finally, in November of 2018, Crystal stepped in to her final role as Director of Operations.

For almost a decade, Crystal had adorned many hats to support the mission and vision of the sanctuary. She developed her own skills and always worked tremendously hard to ensure each and every rescue received the love and care they deserve.

Crystal, you will be sincerely missed by many, canid and human alike.

“After years of having a rigid routine and pouring my heart into the sanctuary, I am aspiring to be open to the unknown and to the changes that will come. I have no particular goal other than doing what is going to fulfill my passions and being of service to others in my own way. Once upon a time, I thought I would want to own and operate a sanctuary of my own. After operating a world-renowned sanctuary, I have to say I have done that and have no desire to do so again. Whatever happens, I will be intimately involved with helping animals utilizing my own gifts. For now, I hope to hone my animal communication skills and perhaps I will find myself training people to train their dogs once again.”

← Prev: Welcome, Kenai! Next: Welcome to the Team, Brittany! →
You May Also Like…