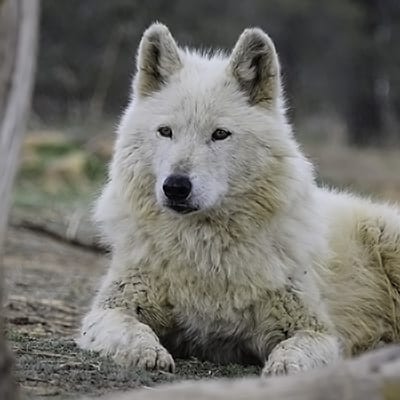 Savannah is a high-content wolfdog. She is 16 years old and her birthday is April 26th, 2006.
NOT on the Tour Path
Enrichment eligible 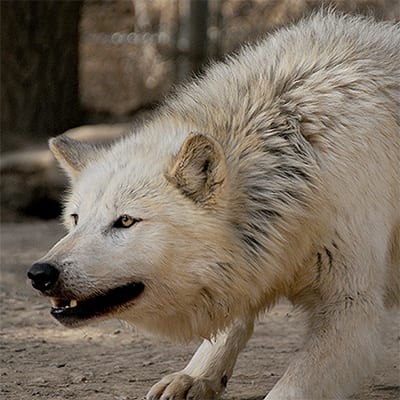 Savannah is a spayed female high-content wolf-dog, which means she looks and acts like a wolf but has a bit of dog in her background. She was born in April of 2006 and came to Wild Spirit Wolf Sanctuary in June of that year. 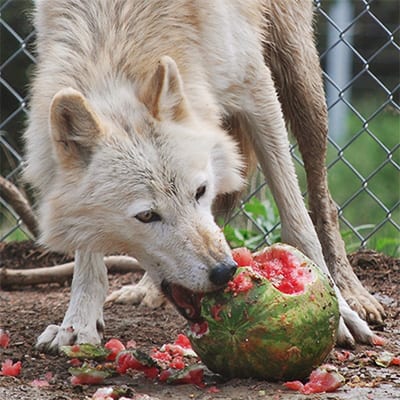 Savannah is full of energy! She can be shy with new people at first, but she usually finds the confidence to approach because she loves attention from people. Our sweet, goofy girl has a lot of love to give.

Savannah has had many companions over her years at Wild Spirit. Originally living with Arctic wolf Storm, then Beric Dondarrion of our Westeros Pack until his passing, senior rescue Sioux until his passing, rescue Kenai, and now has settled down with Arctic wolf, Teton. Her and Teton are one of our best companion pairs at the sanctuary currently and the two seem to absolutely adore each other. Savannah is often seen giving Teton kisses after they each eat their daily medication medballs.

When she was younger, Savannah had stunning eye markings. It looked like she had her eyeliner professionally done. Savannah’s nickname is “Banana” or “Nana” and often you can hear Keepers affectionately calling out “BANANA!” when going to interact with her. 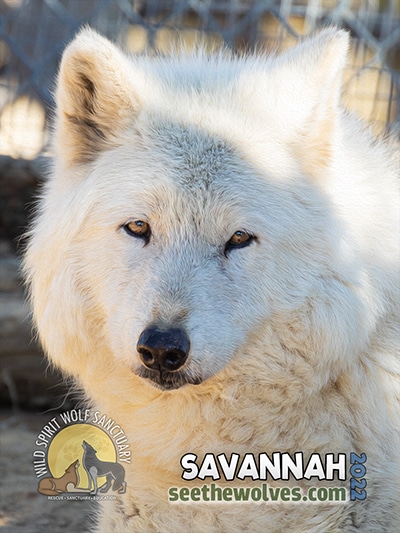 Savannah has only 6 sponsors!

Just like her siblings, Savannah loves food of all kinds. She is not picky! She also enjoys stuffed toys and enrichment gifts that she can rip to shreds!

She dislikes fasting days and waiting to be fed. And is not a fan of larger groups of people, they can make her a little nervous. 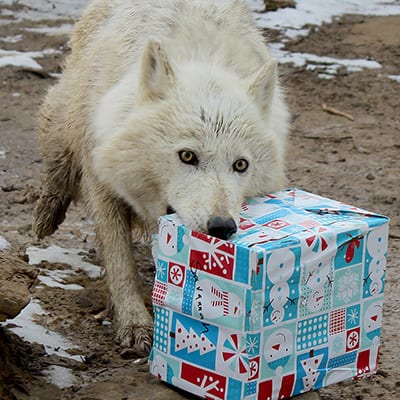 In 2006, shortly after we rescued the litter of Arctic wolf pups (Storm, Sugar, Powder, Alice, Thunder, and Sabine), a friend of Wild Spirit called to see if we were interested in more puppies. A litter of 8 Arctic-Timber crosses had been born in Oregon to a man who did not know what to do with them. We explained that we really had our hands full already and wouldn’t be able to take them. However, a former staff member who was planning to open a sanctuary in Ohio was eager to take the Artic-Timber litter. Out of the 8 pups in the litter, 3 were sold to private owners and the other 5 were brought to Wild Spirit for temporary housing while their rescuer made arrangements to come to pick them up. Unfortunately, his plans to open a sanctuary fell through, and Wild Spirit ended up keeping the 5 puppies: 3 boys and 2 girls, named Forest, Dakota, Brutus, Savannah, and Sassy. Since they were only a week apart in age from our Arctic puppies, we put them together and let them grow up as one big family.

As the Arctic-Timber puppies grew up, it became clear from their behavior and appearance that they were not pure wolves, but rather high-content wolf-dogs, meaning they are mostly wolf but do have a bit of dog in their genetic history. Despite this difference, they lived happily with the Arctic wolves, and eventually all divided into independent packs, each made of a combination of the two litters. Although our Arctic-Timber wolf-dogs tend to be a bit more outgoing than our Arctic wolves, they are still just as innately wild and prefer to live in a pack with their own kind than in a home as someone’s pet.

Savannah decided to live with Storm, and for years they made a great pair. However, over time they began to have spats over food and attention from their caretakers. Storm often left the enclosure for ambassador work, and one day when he returned, Savannah made it clear that she no longer wanted him in the enclosure with her. To avoid serious injury, the lifelong companions were separated, and Savannah was introduced to Beric Dondarrion of the Westeros Pack. Savannah’s affectionate personality helped Beric become even more social with his caretakers. Although they occasionally competed for attention, they got along beautifully and enjoyed each others company.

Savannah now lives with another senior rescue, Sioux. We are so glad they seem to be getting along well together!