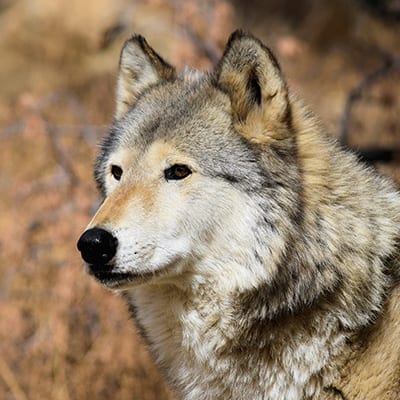 Dakota is a high-content wolfdog. He is 15 years old and his birthday is April 26th, 2006.
NOT on the Tour Path
Enrichment eligible 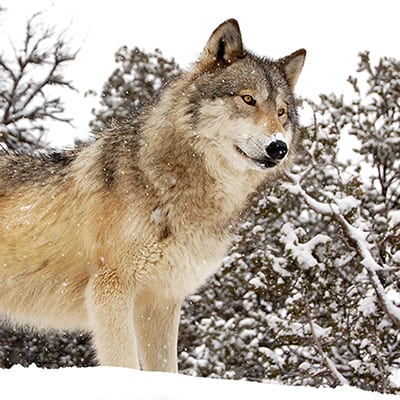 Dakota is a neutered male high-content wolf-dog, which means he looks and acts like a wolf but has a bit of dog in his background. He was born in April of 2006 and came to Wild Spirit in July. 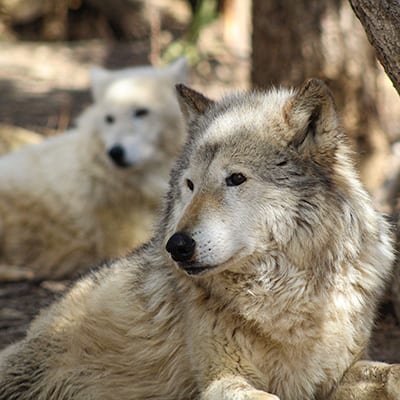 Dakota is a very social, incredibly energetic boy. He is comfortable meeting people but will jump up to give kisses, so we have to be careful who he meets so he does not knock people over.

Dakota used to live with Arctic wolves Sugar and her brother, Powder. Dakota was moved to another habitat and introduced to recently rescued, Sox. The two appear to enjoy each other’s company, so this pairing may become permanent.

We call Dakota our “Super Model” because he has been photographed so many times and photos of him appear all over the Internet. His eyes are on our billboard. His image has appeared in calendars and he was once on the cover of our local phone book! 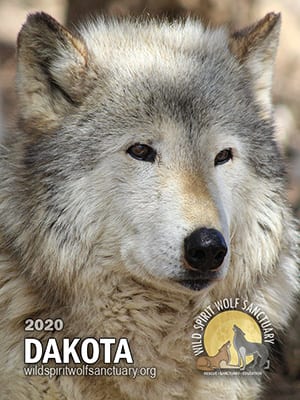 Dakota has only 5 sponsors!

It’s safe to say that Dakota loves food. He used to eat in a sub-enclosure, so he wouldn’t steal his former habitat mate’s meals. He also loves tearing apart his enrichment treats. He is one of our most social rescues, and loves meeting new people, unlike most high-content wolf-dogs who are often shy.

Dakota dislikes when it’s time to remove the old enrichment bones from his habitat. 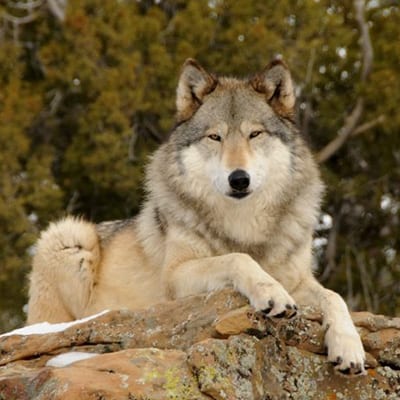 In 2006, shortly after we rescued the litter of Arctic wolf pups (Storm, Sugar, Powder, Alice, Thunder, and Sabine), a friend of Wild Spirit called to see if we were interested in more puppies. A litter of 8 Arctic-Timber crosses had been born in Oregon to a man who did not know what to do with them. We explained that we really had our hands full already and wouldn’t be able to take them. However, a former staff member who was planning to open a sanctuary in Ohio was eager to take the Artic-Timber litter. Out of the 8 pups in the litter, 3 were sold to private owners and the other 5 were brought to Wild Spirit for temporary housing while their rescuer made arrangements to come pick them up. Unfortunately, his plans to open a sanctuary fell through, and Wild Spirit ended up keeping the 5 puppies: 3 boys and 2 girls, named Forest, Dakota, Brutus, Savannah, and Sassy. Since they were only a week apart in age from our Arctic puppies, we put them together and let them grow up as one big family.

As the Arctic-Timber puppies grew up, it became clear from their behavior and appearance that they were not pure wolves, but rather high-content wolf-dogs, meaning they are mostly wolf but do have a bit of dog in their genetic history. Despite this difference, they lived happily with the Arctic wolves, and they eventually all divided into independent packs, each made of a combination of the two litters. Although our Arctic-Timber wolf-dogs tend to be a bit more outgoing than our Arctic wolves, they are still just as innately wild and prefer to live in a pack with their own kind than in a home as someone’s pet.

As they divided, Dakota chose to live with Powder, Sugar, and Sabine, and they became known as Powder Pack. Despite growing up together, this pack has had some drama over the years; Nimoy lived with them briefly before they kicked him out, and Sabine was also forced to leave in 2014. After Sabine’s removal, things were peaceful for this group of three, but we always keep an eye out for shifting pack dynamics that may lead to a conflict. As the lowest ranking in the pack, Dakota is sometimes bullied by Powder and Sugar, so we always observe carefully to be sure this doesn’t escalate into a larger problem.