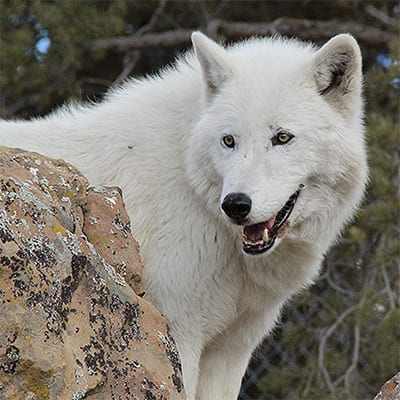 Powder is a wolf. He is 16 years old and his birthday is May 3rd, 2006.
NOT on the Tour Path
Enrichment eligible 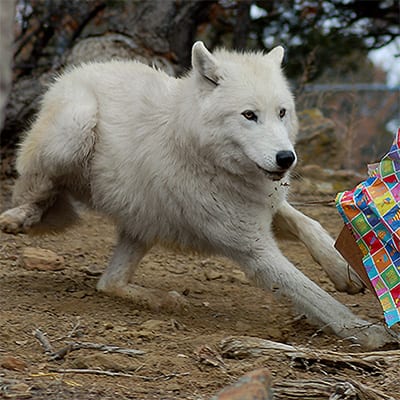 Powder is a neutered male Arctic wolf. He arrived at Wild Spirit Wolf Sanctuary
on May 22nd, 2006, 19 days after he was born. 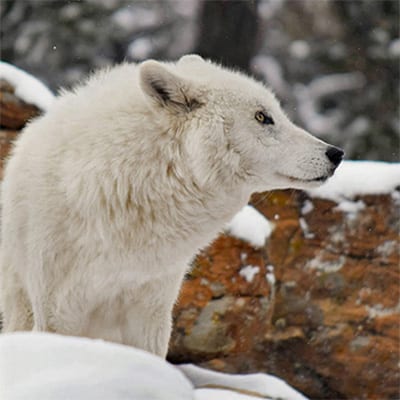 Powder is one of the shyer kids from his litter, but he is very close and affectionate with people he’s known for years. He sometimes is brave enough to go for leashed walks around the sanctuary.

Powder lives with his sister, Sugar. The two are often seen laying together or interacting with their neighbors.

Powder was named after the gentle and magical main character in the movie Powder. Arctic wolves are born gray and turn white with age. The last thing to turn white on Powder was a tiny, grey goatee on his chin!

Powder has only 5 sponsors!

Powder likes to let everyone know that he’s the boss, and so he enjoys making people wait for him, and refusing to take his medball from new volunteers. He also enjoys interacting with all of his young neighbors and often can be seen howling for them if they go out for walks.

Because he has hypothyroidism, Powder needs his blood drawn regularly to make sure his medication is working. He tolerates this, but we know he doesn’t like it. 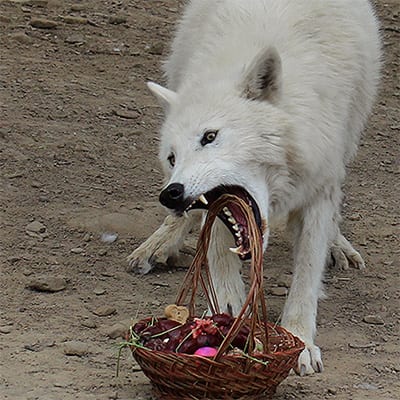 The story of Powder and his family (The Arctics) and why they live at Wild Spirit is a long one, but we feel it is important to share it. On May 3rd, 2006, Powder and his siblings were born to captive-bred parents, Yukon and Sierra, at a breeding facility. The story we heard was that Yukon and Sierra were born to wolves who were taken from the wild. The breeder who owned Yukon and Sierra had been selling their pups to select private owners or for exhibits like zoos. Very sadly, in order for wolves to be socialized to humans at all, they must be taken from their parents before they open their eyes. Even then, they may remain too wild-spirited to be comfortable around people and will never behave like a domestic dog. For eight years, Yukon and Sierra had each of their newborn litters taken and sold.

The impact of meeting our rescues in person and hearing our message leaves an ever-lasting impression on people of all kinds. We have met many of our largest supporters at outreach events with one of our wolf or high-content wolf-dog rescues. Over the years, Raven literally changed hundreds of people’s lives in a positive way, and people continued to spread our message after meeting him. Most notably, Raven inspired a change of heart in a wolf-hating rancher who bought us dinner and opened his home to us at any time. The trend continued when Forest, another one of our rescues, inspired a hunter to change his philosophy. After meeting Forest and hearing our message, the man decided to cancel his upcoming wolf-hunting trip. These moments demonstrate just how important educational outreach is for wolves and wolf-dogs, both captive and wild.

As Raven got older, we hoped to find a puppy in need who we could help and who could follow in Raven’s very large pawsteps to continue educating the public. The breeder who owned Yukon and Sierra offered to donate two puppies from the litter they were expecting. In our view, we would be giving these pups a safe, secure life, where they would not end up chained or euthanized like so many wolves and wolf-dogs. We would also have the chance to continue our crucial outreach and education programs.

Sierra had a litter of six puppies including Alice, Thunder, Sabine, Sugar, Storm and Powder. Unexpectedly, none of the puppies were sold, and the breeder was left with six puppies who needed to be bottle-fed and cleaned every two hours, constantly with people to maintain socialization, and continually exposed to many different situations. We had volunteers eager to help, so we agreed to take all six puppies (and eventually went back to rescue Sierra, Yukon, and Axel, too). Even with a full staff and many volunteers, raising wolf puppies is exhausting work. Despite being surrounded by people and hand-raised by humans, only two of the six puppies grew up to be comfortable meeting the public – Storm and our late Sabine.

Wild Spirit has grown a great deal since we became an official non-profit back in 1993. We realize we are always evolving, and we work hard to improve and change along the way to ensure we reach our mission statement goals of Rescue, Sanctuary, and Education. In order to ensure that our true message is heard and those most in need are offered help, we have decided not to seek out wolf puppies to socialize in the future. If there is a puppy in need of rescue and we can offer them sanctuary, of course, we will. However, we know that the animals most in need are often older, already poorly socialized, and suffering from serious misunderstanding and mistreatment, so those are the ones that we will pursue most diligently.

Our Arctic puppies were introduced to a litter of Arctic/timber wolf-dogs in June of 2006. The Arctic/timbers were the same age as our Arctic litter, and although they were supposed to be at WSWS temporarily, their rehoming plans fell through. Since the puppies were all so young, they were raised together as one large pack and naturally divided into pairs or smaller packs of their own choosing as they aged. Powder lives with his littermate Sugar and their life-long friend, Dakota, and their very distinctly different levels of comfort with people show that despite doing everything possible to socialize a wolf or wolf-dog, sometimes it’s just completely luck of the draw.