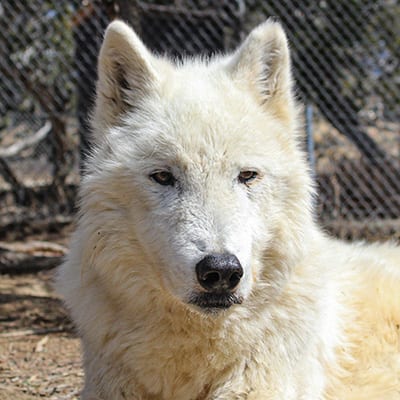 Flurry is a wolf. He is 15 years old and his birthday is May 8th, 2007.
On Tour Path
Enrichment eligible 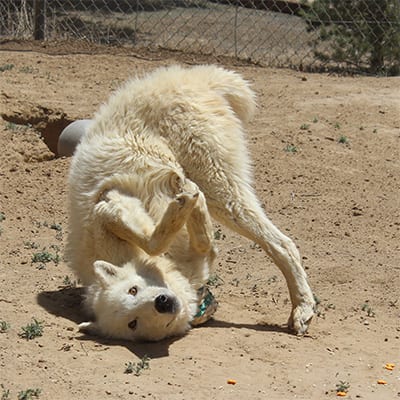 Flurry is a neutered male Arctic wolf. He was one of the few rescues born at Wild Spirit on May 8th, 2007 after his father Yukon and pregnant mother, Sierra, were given to us when a breeder retired. 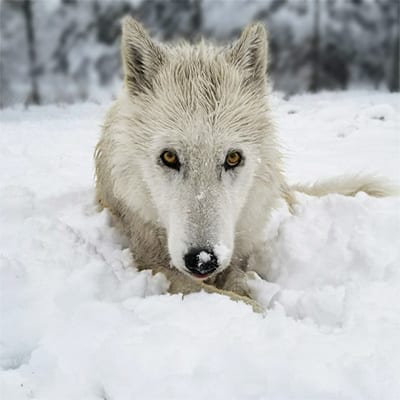 Flurry is unusually social for a wolf. He was born in captivity and raised by humans, but that alone will not make wolves social to humans. When he was younger, he was very dominant with other canines, but he was one of our most friendly rescues with humans. He still enjoys meeting people, but he remains an innately wild spirit.

Flurry has had several companions over the years. He spent many years living with high-content wolfdog, Ally, until her passing and then helped with raising rescue, Naia, until her puppy energy became a bit too much for him. Shortly after he moved in with senior Arctic wolf, Alice, and the two have made a wonderful match.

Flurry is one of the few rescues we have who was born on site along with siblings, Teton, Shasta, Trinity, and Frost. While he is now retired, as an ambassador Flurry met many people, including some of the cast of Game of Thrones! He once received a standing ovation at SI Yankees Baseball Stadium, and has been featured on TV and in Rolling Stone magazine. 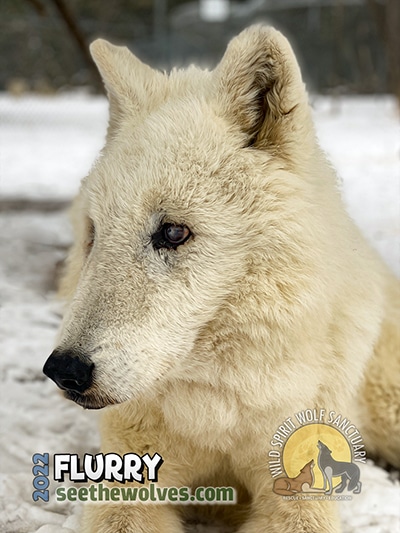 Flurry has only 10 sponsors!

Above all else, Flurry loves being the center of attention. He especially enjoys making other rescues jealous. He is also our champion scent-roller, hilariously shoulder diving into both good and bad smells.

Flurry very much dislikes when his caretaker opts to visit with others before him, or even worse, takes other rescues out for walks instead of him! Flurry will loudly voice his unhappiness until the other rescue is back in their enclosure and Flurry feels his point has been made. 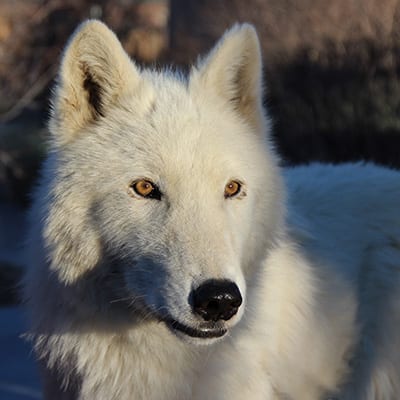 The story of Flurry and his family (The Arctics) and why they live at Wild Spirit is a long one, but we feel it is important to share it. On May 3rd, 2006, six pups were born to captive-bred parents, Yukon and Sierra, at a breeding facility. The story we heard was that Yukon and Sierra were born to wolves who were taken from the wild. The breeder who owned Yukon and Sierra had been selling their pups to select private owners or for exhibits like zoos. Very sadly, in order for wolves to be socialized to humans at all, they must be taken from their parents before they open their eyes. Even then, they may remain too wild-spirited to be comfortable around people and will never behave like a domestic dog. For eight years, Yukon and Sierra had each of their newborn litters taken and sold.

The impact of meeting our rescues in person and hearing our message leaves an ever-lasting impression on people of all kinds. We have met many of our largest supporters at outreach events with one of our wolf or high-content wolf-dog rescues. Over the years, Raven literally changed hundreds of people’s lives in a positive way, and people continued to spread our message after meeting him. Most notably, Raven inspired a change of heart in a wolf-hating rancher who bought us dinner and opened his home to us at any time. The trend continued when Forest, another one of our rescues, inspired a hunter to change his philosophy. After meeting Forest and hearing our message, the man decided to cancel his upcoming wolf-hunting trip. These moments proved to us just how important educational outreach is for wolves and wolf-dogs, both captive and wild.

As Raven got older, we hoped to find a puppy in need who we could help and who could follow in Raven’s very large pawsteps to continue educating the public. The breeder who owned Yukon and Sierra offered to donate two puppies from the litter they were expecting. In our view, we would be giving these pups a safe, secure life, where they would not end up chained or euthanized like so many wolves and wolf-dogs. We would also have the chance to continue our crucial outreach and education programs.

Sierra had a litter of six puppies including Alice, Thunder, Sabine, Sugar, Storm and Powder. Unexpectedly, none of the puppies were sold, and the breeder was left with six puppies who needed to be bottle-fed and cleaned every two hours, constantly with people to maintain socialization, and continually exposed to many different situations. We had volunteers eager to help, so we agreed to take all six puppies (and eventually went back to rescue Sierra, Yukon, and Axel, too). Even with a full staff and many volunteers, raising wolf puppies is exhausting work. Despite being surrounded by people and hand-raised by humans, only two of the six puppies grew up to be comfortable meeting the public – Storm and our late Sabine.

Wild Spirit has grown a great deal since we became an official non-profit back in 1993. We realize we are always evolving, and we work hard to improve and change along the way to ensure we reach our mission statement goals of Rescue, Sanctuary, and Education. In order to ensure that our true message is heard and those most in need are offered help, we have decided not to seek out wolf puppies to socialize in the future. If there is a puppy in need of rescue and we can offer them sanctuary, of course, we will. However, we know that the animals most in need are often older, already poorly socialized, and suffering from serious misunderstanding and mistreatment, so those are the ones that we will pursue most diligently.

After we rescued Sierra and Yukon’s six pups, the breeder decided he was no longer going to breed wolves. Maybe because Sierra and Yukon were getting too old, but most likely because he felt there was more money to be made breeding exotic felines. He called Wild Spirit and let us know that he would like them to retire with us. He also offered to give us Axel, one fo their older pups that he had kept. Accepting new rescues is a very significant responsibility. It requires sufficient space, funds, planning, and help, so we never take this decision lightly. In the process of making arrangements and raising money, the breeder called to let us know if we didn’t hurry, Sierra might be pregnant before we could make the rescue trip from New Mexico to Oregon. We planned to neuter Yukon on the way back, but spaying older females is often too risky for them.

As soon as we could, we made the trip to rescue the older couple and their son. We were thrilled to offer them more room to run and a beautiful place to retire. When we arrived, the breeder told us that he was convinced that Sierra was already pregnant. Although this was not the ideal situation, we were thinking that she would be able to raise her puppies for the first time in her life. We also thought we would have the opportunity to try to socialize another ambassador.

On the way home, Yukon and Sierra stopped by the bet where Yukon was neutered. They settled into their new home nicely, relished one of our most beautiful habitats full of trees and rocks. They also had neighbors, including some of their former pups. They did not show any sense of recognizing them, although we hoped they would. Because they were taken at only 10 days old, it was a long shot.

Sierra and Yukon prepared for their final litter by digging a den in the dirt under a large rock slab. Sierra had five puppies. After 10 days, we removed two for socializing and named them Frost and Flurry. Sierra and Yukon continued to raise two girls and a boy for the first time. We stayed with the mountain theme and named the male Teton and his sisters Shasta and Trinity.

Raising any infant is exhausting for caretakers. Our two 10-day old wolf-pups required constant care from our tireless team. Flurry originally lived with his brother Frost and a spayed female high-content wolf-dog named Sassy. One day, the boys attacked Sassy. After Leyton came to the rescue, he rushed her to the emergency vet. she had extensive bruising, punctures and gashes, but worst of all, she had a punctured lung! Thankfully, she fully recovered and did not go back to live with the brothers.

Tragically, Frost passed away from the genetic heart condition which left Flurry alone. He moved in with an older female named Shakti. He reverted to his sweet, lovable puppy personality, but then was left alone again after Shakti passed. Flurry finally found his love match with another rescue named Ally. They got along well until Ally joined the Big Pack in the Sky on January 29th, 2018. Aside from everyday jealousies and spats over food. They played like puppies.

Flurry has become our best ambassador. He is comfortable meeting people, and will occasionally give a rare kiss to someone he meets. He has traveled to many schools and outreach events and even met some stars! He has been to the premiere parties of the series Game of Thrones and met author George R. R. Martin, actors Mayzie Williams, Taylor Lautner, and comedian Nick Swardson.