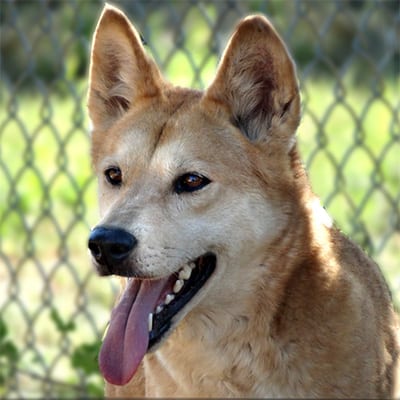 Uluru is an Australian dingo. He is 11 years old and his birthday is June 19th, 2011.
On Tour Path
Enrichment eligible 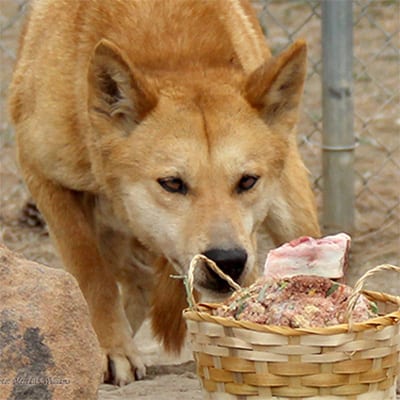 Uluru is a neutered male Australian dingo who was born in 2012. He came to Wild Spirit in the spring of 2013. 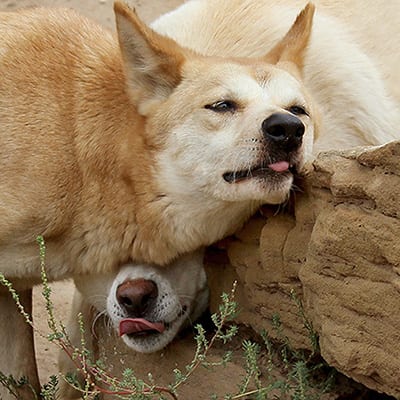 Uluru is a curious boy who likes most people. It may take him some time to find the confidence to approach, but he loves to give kisses and get human attention. He had a very loving relationship with his mom, Kooyong, and he is very close with Aussie, but he has some tension with his other brother, Glacier.

Uluru lives with his two brothers, Glacier, and Aussie. They are on the tour path and usually come to the fence line to greet guests. Their mom, Kooyong passed away in 2019,

Uluru has quite the mischevious side to him! Just when we think we have figured him out, he will do something completely unexpected. He likes to sneak up on his caretakers and startle them with an occasional kiss. He proudly runs run away with a smile. 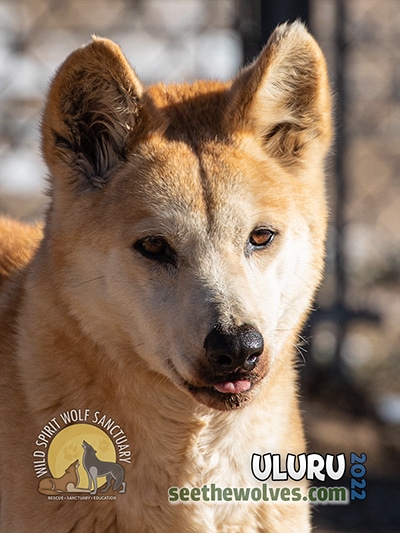 Uluru has only 7 sponsors!

Uluru likes his brother, Aussie, and people that he knows well. He also enjoys being visited by humans, when the opportunity presents itself.

Uluru dislikes when his brother, Glacier, pushes him around. He also doesn’t like game meat or anything out of the ordinary when it comes to his food. 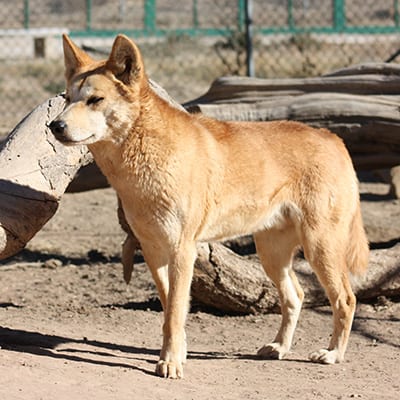 Our dingoes were displaced after a couple’s conservation efforts did not go as planned. Kooyong and her mate Buckley were a breeding pair of pure dingoes who came from Dingo Discover and Research Centre in Australia, which has been an official conservation organization since 2007. The Centre finds zoos and sanctuaries outside of Australia, who are willing to care for a breeding pair of dingoes and their offspring to help ensure that the species survives.

Occasionally a breeding pair goes to a private home, and Kooyong and Buckley went to live with a husband and wife in Florida. They gave their dingoes great care and made sure they had plenty of love, socialization, and a rich diet. Once settled in her new home, Kooyong had a litter of six pups. Although the whole dingo family had great care, the human family went through a financial rough patch. The husband tried to sell Kooyong’s pups and quickly found out that it was illegal. Facing serious consequences for this misjudgment, he left the home, taking what remained of their funds and leaving his wife and her son alone with all the animals.

Around the same time, Buckley and his three sons had a terrible fight that resulted in Buckley being euthanized due to devastating injuries. With tremendous sadness, the woman decided her dingoes needed placement in new homes. Two of Kooyong’s pups found a home at a zoo. Kooyong, Aussie, Glacier, and Uluru had a terrific foster home in North Carolina until Wild Spirit staff could bring them to their permanent home at WSWS. Because we are a sanctuary and do not want to add to the population of animals kept in captivity, the entire family is now spayed and neutered. Neutering the 3 boys has helped keep the peace, but because they can no longer reproduce, our dingoes are no longer part of the conservation program.