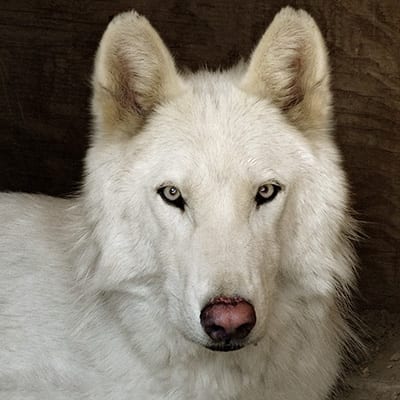 Zeus is a mid-content wolfdog. He is roughly 10 years old and his birthday is around June, 2011.
NOT on the Tour Path
Enrichment eligible 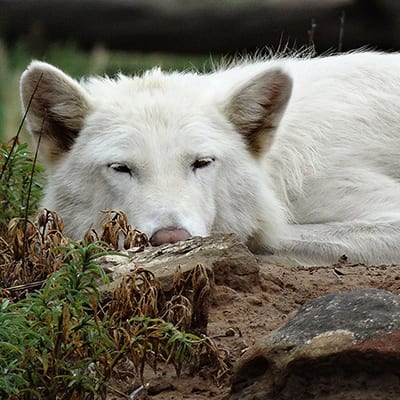 Zeus is a neutered male mid-content wolfdog. He came to live at Wild Spirit in the fall of 2015 when he was around 4 years old. 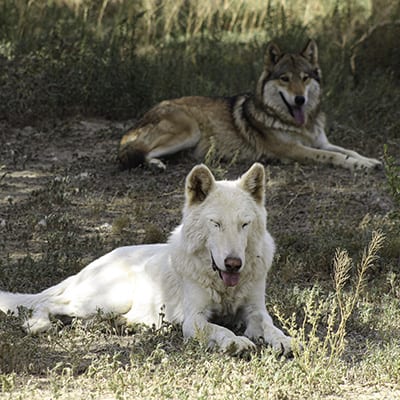 Zeus is a shy, quiet, and slow-moving gentleman. We have watched him become more comfortable at Wild Spirit, finally feeling brave enough to howl along in the group howls. It’s taken him a while to build relationships with caretakers, but he’s learned that human attention can be a good thing sometimes.

Zeus lived with another mid-content wolfdog named Oni, until her passing in the Fall of 2020. More recently he has moved in with rescue, Mika and the two seem to be hitting it off so far.

When a caretaker approaches his habitat with his medball, Zeus will “hide” in plain sight in the corner of his habitat. Just as the caretaker reaches the fence, he sprints up and grabs his medball, very pleased with himself for being such a talented hunter. He also has the cutest pouty bottom lip. 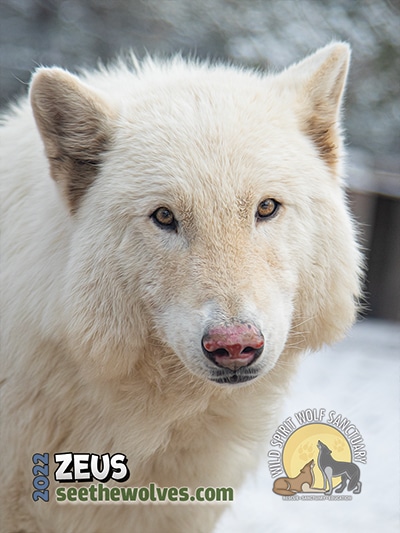 Zeus has only 6 sponsors!

Zeus loves breakfast time and hanging out near his pond.

Zeus hates when his caretaker is slow about delivering his breakfast. 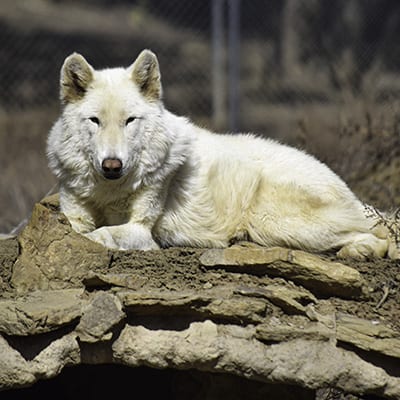 We wish we could tell you the full story of our handsome rescue, Zeus, but sadly, we know very little about him. We were told he is a Tundra wolf taken as a pup from a den in Alaska, but we think he’s more likely a wolf-dog, born in captivity. His ears are larger than a pure wolf, but he does have classic wolfy legs! Also, his behavior is very much like other mid or high-content wolf-dogs we’ve encountered, and not that of true wolves.

Zeus was brought to Wild Spirit by a friend of his previous owner. Unfortunately, this man wasn’t able to tell us much about Zeus’ previous life. We were told he had had a female companion who was also taken from the wild, but although we hoped to rescue her, too, it never came to be. Sadly, she was killed the night before their trip to WSWS for reasons that are still unclear. Zeus arrived alone, with an erratic limp and several cuts on his face. We’re not sure what his life had been like before he made it to us, but we took comfort in the fact that from that point forward, he’d have excellent, loving care for the rest of his life.

Since Zeus arrive without a companion, we wanted him to find a friend in another rescue. He was able to be leashed when he first arrived, which helped us introduce him to some of our single girls. Unfortunately, there were no good matches available and Zeus lived alone for several months. Finally, mid-content wolf-dog Oni became available. She and Zeus weren’t necessarily a match made in heaven, but after a few days of smoothing out some rough patches, they settled in together.

Zeus is always paying attention to what’s happening around the Sanctuary, yet he rarely wants to socialize with volunteers or staff. He likes to act aloof, but he’s actually very interested in people. Occasionally, when presented with the right person and moment, he will ask for some pets, but the caretaker needs to know when he’s had enough, or Zeus might snap at their hand. He doesn’t quite understand how to get what he wants just yet.