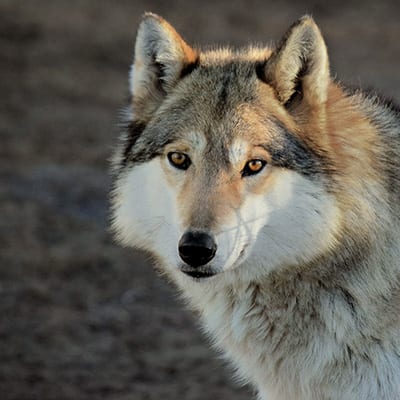 Oni is a mid-content wolfdog. She is 10 years old and her birthday is February 16th, 2011.
On Tour Path
Enrichment eligible 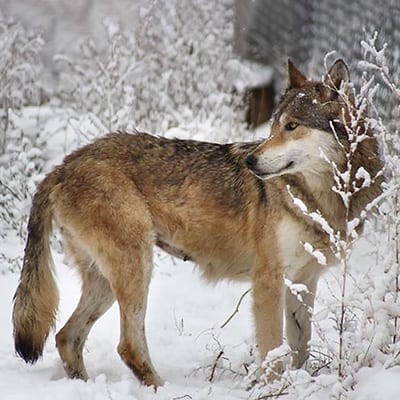 Oni is a spayed female mid-content wolf-dog. That means she looks and acts half like a dog, half like a wolf. Oni came to Wild Spirit Wolf Sanctuary in November of 2015 when she was 4 years old. 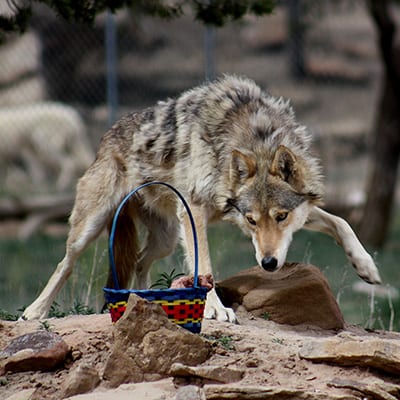 Oni is a wild-spirited girl who is full of surprises! Although she’s too shy to let her caretakers pet her, she’s very curious and will follow closely behind her caretaker as they clean. Once they “see” her, she’ll play bow and run away like a rocket! Oni and Zeus get along, but every now and then she likes to pick on him. You’ll see this curious girl on our standard tour.

Oni now lives with a neutered male wolf-dog named Zeus. When she first arrived, we introduced her to five of our current bachelors, including Lucian, Lakota, Storm, Zeus and Zoerro. They all were happy to meet her, but our picky bachelorette didn’t like ANY of them! She seemed the most tolerant of Zoerro, so they lived together until Zoerro moved with his previous owner, after which she moved in with Zeus.

When Oni was on her way to Wild Spirit in our transport van, she slowly and silently pulled our former Director, Leyton‘s, sleeping bag into her travel cage! He let our beautiful rescue keep her hard-won prize. We placed the sleeping bag inside the den in her new habitat when she arrived. 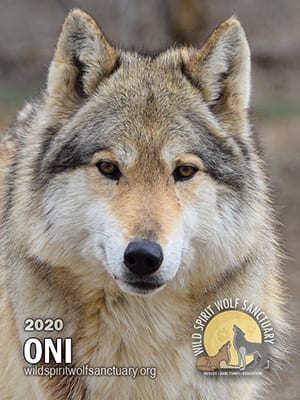 Oni has only 4 sponsors!

Oni loves playing with Zeus. Although she can be a little bit of a bully, they get along well and Oni loves to wrestle and run around with her habitat-mate. She also likes following her caretaker around her habitat, sniffing everything they touch.

Oni doesn’t like to be touched or cornered. She’s a true wild-spirit, and she likes to keep humans at a distance. 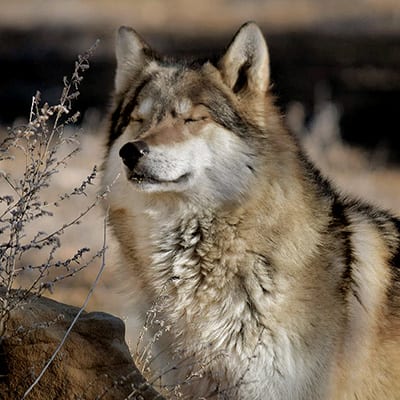 In the second week of November 2015, we received an urgent plea from a woman in California who had a four-year-old wolf-dog named Oni. Animal control was threatening to take her away due to a recent escape. Oni’s owner loved her very much, but she knew she couldn’t guarantee Oni’s safety as long as she continued to live with her. She needed help to make sure Oni was safe, contained, and able to be herself, so she called WSWS.

Oni was originally purchased from a breeder when she was four months old. Her new owner didn’t realize until she brought Oni home that she had not been socialized, and at four months old, the window of opportunity was rapidly closing. Naturally, Oni was very anxious and shy. She never liked to be approached, and she wasn’t very happy about wearing a collar or a leash, which of course made it difficult to do anything with her. Not only was it difficult for her owner to interact with her, but it was traumatic and stressful for Oni. Socialization is vital to the emotional health of every being, but wolf-dogs are more wild-spirited than many domestic dogs. It goes against their nature to be comfortable around new things, busy places and people. If they are socialized as puppies, they can feel somewhat comfortable in captivity, but not always. If they are not socialized as puppies, they will always be uncomfortable in captivity, just like Oni. Tragically, this is the main issue that very often leads to abuse, abandonment and euthanasia of wolf-dogs.

Oni’s owner never gave up on her and worked hard to make her more secure and comfortable over the next several years. Unfortunately, changes in her financial situation forced her to leave her remote ranch and move back into the city. With the help of family, she transformed her driveway into an enclosure for Oni the length of her house, which worked well for a while. Gradually, the noise and activity of the city made Oni even more anxious. Her owner could still play with Oni in the yard and the enclosure, but anytime Oni would go out on a leash, something noisy would startle her. Soon, Oni decided she would no longer allow anyone to leash her.

In time, Oni developed a non-contagious skin condition. Her owner wanted to take Oni to the vet to get her some treatment, but because Oni would no longer tolerate a leash or collar, she couldn’t get to the vet. Even routine visits, like vaccines, were impossible. Unable to provide even the most basic care for her beloved wolf-dog, the owner decided she needed to find a better place for Oni.

She began contacting rescues and sanctuaries. During the first week of searching, an unusually wet storm hit her town and one of the dig guards in Oni’s enclosure collapsed, allowing her to break free for a day. Local animal control got calls from many residents thinking there was a coyote on the loose. Fortunately, Oni made it home safely after her big adventure, but thanks to the volume of calls, animal control wanted to take her away. The owner pleaded with them, explaining that she was already in contact with several rescues and sanctuaries. Animal control agreed not to take her only if she could find a sanctuary to accept Oni.

While Oni’s owner searched for sanctuary for her wolf-dog, Wild Spirit found ourselves with five “bachelor” residents looking for companions. Although we never breed our rescues, we know life is better with a friend for social animals like canines. We made the careful decision to accept Oni for lifetime care at Wild Spirit with the intention of pairing her with one of our lonely boys. Thanks to a successful Fundrazr campaign, we quickly raised funds and made the trip to pick her up, finally get her to the vet for proper care, and of course, have her spayed.

While recovering in our animal care office after being spayed, Oni demonstrated her escape-artist skills. Somehow, this smart girl opened her travel cage and made herself at home on top of the counter, looking out the window at her new home. Living in close quarters with our animal care team, Oni grew fairly comfortable with our staff. Her skin condition cleared up, her spay incision healed, and we were able to leash her and take her out to explore her new home!

On her first walks of the sanctuary, we introduced her to each of our bachelors by taking her to visit them at their habitats. They were all interested in her, but she was very aloof and showed no signs of wanting to meet any of our boys. After several walks together with high-content wolf-dog, Zoerro, we felt that he and Oni would do best together. We introduced her into his habitat and kept close watch over the next several days. Their relationship was no love match, but they respected each other and made it work. After Zoerro left with his former owner, Oni moved in with Zeus. After some initial disagreements over food, they’ve proven to be a good match. Playful, energetic Oni has brought out a more social and playful side of Zeus, and the two run around together, wrestle, and socialize with their neighbors through the fence.