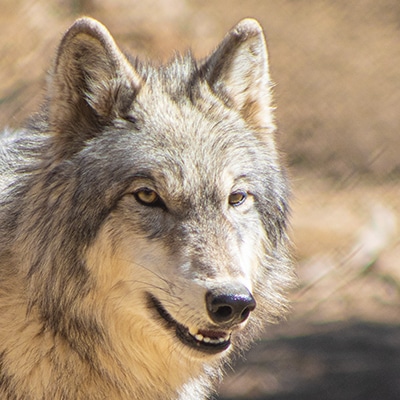 Tehya is a high-content wolfdog. She is roughly 3 years old and her birthday is around May, 2019.
NOT on the Tour Path
Enrichment eligible 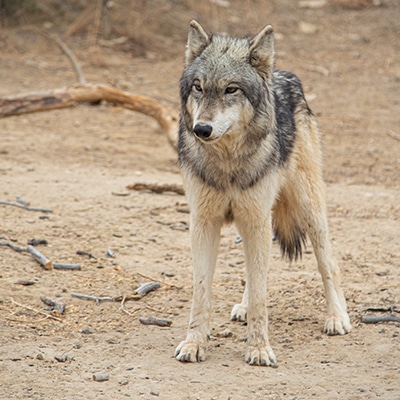 Since Tehya is so new to us, we’re still learning about her. She is moderately shy around most people, but not with the adjacent rescues! She really enjoys playing with her neighbor, Kaya through the fence. Happily, she and her new habitat-mate, Cinder, get along well. 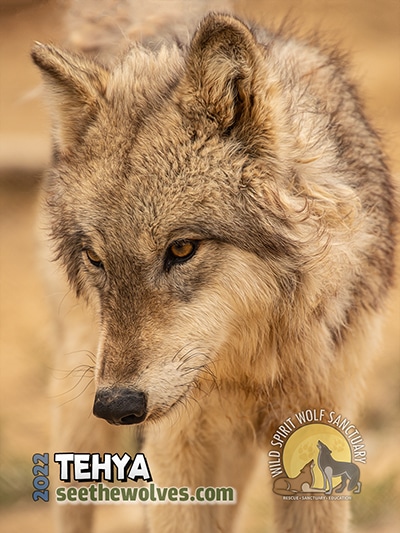 Tehya has only 7 sponsors!

In January of 2021, Executive Director, Brittany McDonald, received an email from a fellow wolfdog rescuer stating that there was an animal in urgent need of placement as a result of controversy between the animal’s owner and her neighbors. In the days to follow, we made contact with Tehya’s owner who was able to provide us with some of her history.

We learned that as a puppy, Tehya was purchased by a person who soon after abandoned her at a doggy day care in San Diego… From there, she went to a second home where she spent most of her days in a crate for approximately six weeks before being re-homed once more in August of 2019 — all this by the time she was just three months old.

Fortunately, Tehya lived out roughly the next year and a half in a loving home where she grew into a sweet and social girl. Unfortunately, as time went on, her presence began to make the neighbors uneasy, and the resulting conflicts forced her owner to begin looking for a new home immediately.

Five days after Wild Spirit received word of Tehya, we set out for California to retrieve her. Upon arrival, Tehya was experiencing a high amount of stress as a result of unfamiliar people at work on the property. As such, she was not able to be leashed and loaded into the rescue van as originally planned. Thankfully, Brittany and intern Shaina were able to coax her into a fenced-in corner of the property that created the perfect space to gently guide her into a crate. From there, she was loaded into the van and given free rein of the holding area where she could move around and stretch her legs.

During the drive home Tehya was calm and quiet and even allowed Brittany and Shaina to give her gentle pets and remove her collar. Once at the sanctuary, she was released into her temporary pen where she immediately went to visit with her neighbors, Quinn and Lyca on one side, and Flurry on the other!

Since arriving, Tehya has been a bit shy and nervous, but we have no doubt that she will quickly warm up over time. We are hopeful that a future match with Cinder will bring out her loving and playful side.