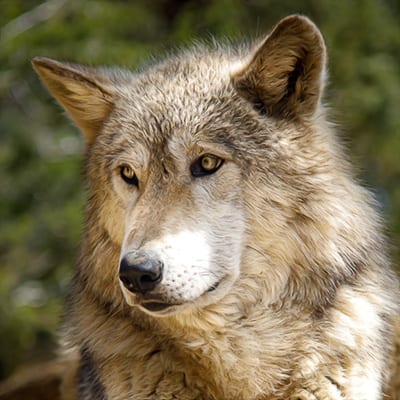 Cinder is a high-content wolfdog. He is 9 years old and his birthday is May 15th, 2013.
NOT on the Tour Path
Enrichment eligible 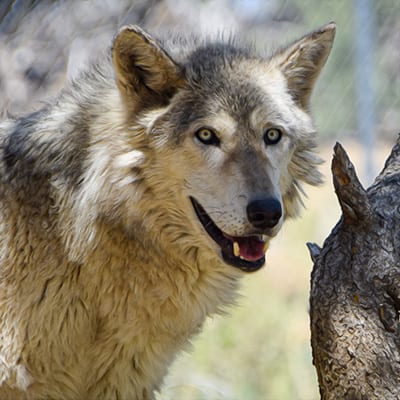 Cinder is a neutered male high-content wolf-dog which means he looks and acts like a wolf but has some dog in his history. He came to Wild Spirit in the Fall of 2014 after running free in Arizona. 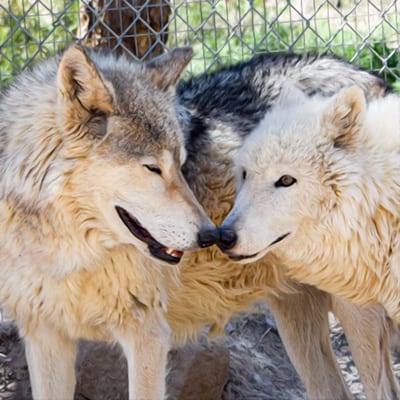 Cinder has really warmed up to people and now trusts the Animal Caretakers enough to let them pet him. After being too shy for contact for 6 months, Cinder brought tears to our eyes when he suddenly changed his mind. He is a playful, goofy boy who loves his companion, and his neighbors.

Currently Cinder lives with female mid-content wolfdog, Mika. Cinder previously lived with high-content wolfdog, Riot, and he absolutely adored her. With her help, he became more social with the animal care team. After Riot’s passing Cinder was paired with new rescue Tehya, who passed away in June, 2022.

Cinder is one of the few rescues we have who has had a DNA test. He looked so much like a wolf, Fish & Game had him tested and the results had “dog markers.” He and Riot were also featured in an article by The Dodo. 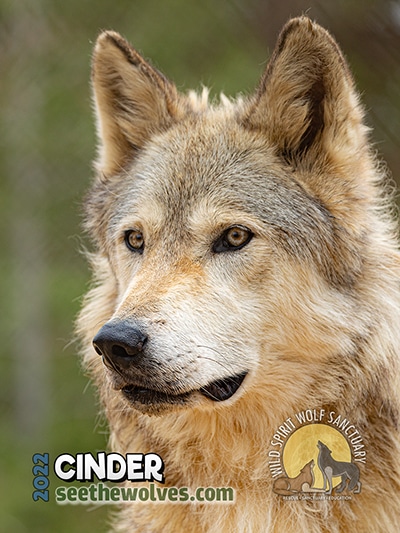 Cinder loves giving his habitat-mate “Love-Bites.” This is when a canine gently takes the muzzle of another in between their teeth, without it being a discipline. He also loves fence-fighting with his neighbors, and scent-rolling on his caretakers or any strong scented item – good or bad!

Now that Cinder learned how great it feels to get scratched and loved, he can get jealous if his companion gets more attention than him. He doesn’t seem to like howling very much. 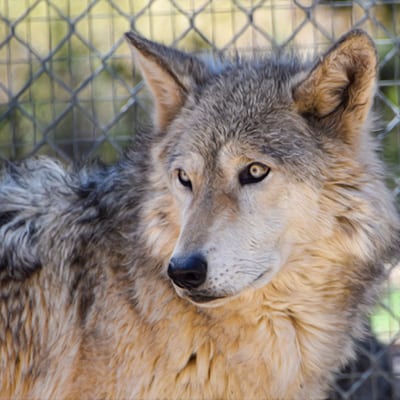 Cinder was first spotted near Flagstaff, Arizona, by a man who saw a very wolf-like animal repeatedly climb onto his porch and visit with his dogs. When the man called Coconino County Animal Management, he said that the “wolf” seemed very hungry and frightened of people.

The reporting officer, Jack Roberts, headed out to set up a humane trap, and perhaps due to hunger, the mystery animal was caught that very night. When Officer Roberts went back out to check the trap, he quickly saw that what he’d caught was, in fact, either a wolf or a high-content wolfdog. He called for the assistance of Charlotte Peterson, a fellow officer who would play a major role in finding a permanent home for this animal. They named the animal Jack, after the officer that had caught him, and he was brought to the Coconino Humane Association.

According to Charlotte, “It had been years since we had seen a wolfdog look so high-content, but we all had the feeling that he had been someone’s pet at one time.” Because it is illegal to own a wolf in Coconino County, but not a wolfdog, the shelter conducted a DNA test in order to determine whether Jack was a pure wolf, or a wolfdog. Jack’s entire future would be determined by the test results. That night, however, Jack escaped from his kennel and broke through the back door of the shelter. Charlotte and her team were called and they immediately dispatched Animal Management to begin the search. It wasn’t long before people living near Northern Arizona University heard Jack howling at night and shortly after, sightings began, too. Jack was shy, never showed any aggression to anyone, and just really wanted to spend time with the neighborhood dogs. He began frequenting one home where they fed him.

Due to public fear that Jack might be a wolf, Fish and Game sent a team to assist, but shortly after, the DNA results came back and showed Jack to be a high-content wolfdog. Therefore, he was essentially just a loose pet, so Fish and Game pulled out of the search. Yet Animal Management continued their efforts to catch Jack and bring him back to safety, away from dangers like busy roads filled with fast-moving cars. Sure enough, a man soon reported that Jack had run out on the road and been bumped. Charlotte Peterson and her team decided it was time to stop chasing and act quickly before more harm came to Jack, stating, “I was getting very worried it would end badly. So with the help of Dr. Monet Martin and Dr. Carly Bennett of Kaibab vet clinic, I devised a plan to orally tranquilize [Jack] and get people to stop chasing him. After watching him eat the tranquilizer, Katie Tarr, the vet tech from Kaibab vet clinic went running like a ninja through the woods to ensure [Jack] didn’t go into the road. City animal control Officer John Marciniac joined the tracking (keeping [Jack] away from dangerous traffic). We asked a select few neighbors to assist and after Officer J.J. Licini of County Animal Management finally helped corner [Jack], we were able to dart him in the hip. Previous attempts had been made to dart him by other organizations resulting in a dart injury to his rib, so we were very careful to do no further harm to this animal we had all grown so fond of. Finally, [Jack] fell asleep. We called Dr. Bennett, who rushed in on a Sunday to perform the necessary medical procedures at a generous discount, all of which were paid for by the county. We started an IV, took radiographs to make sure his encounter with the car didn’t do serious damage, and neutered him.”

Happy ending, except now Jack had no place to go. Charlotte was worried she would not find a suitable rescue facility for him, and it was clear he couldn’t stay at the shelter forever. She called several choices and one in New Mexico referred her to Wild Spirit Wolf Sanctuary: “They responded so quickly and we were delighted when we saw their facility online (being avid Game of Thrones fans didn’t hurt either!). We vaccinated Jack and Wild Spirit staff came and rescued him. We were all there to say goodbye, even the neighbor who had been feeding him and the 9-year-old girl who was the only one he would let pet him while he was ‘on the lam’. Thank you to all the thoughtful people who gave their time and energy to make this rescue a success. Thank you to Wild Spirit for giving him sanctuary for life. Jack was certainly a special animal and he got to go to a wonderful place.”

Since arriving home at Wild Spirit, Jack has been renamed Cinder. He is currently living with Mika a mid-content female wolfdog.