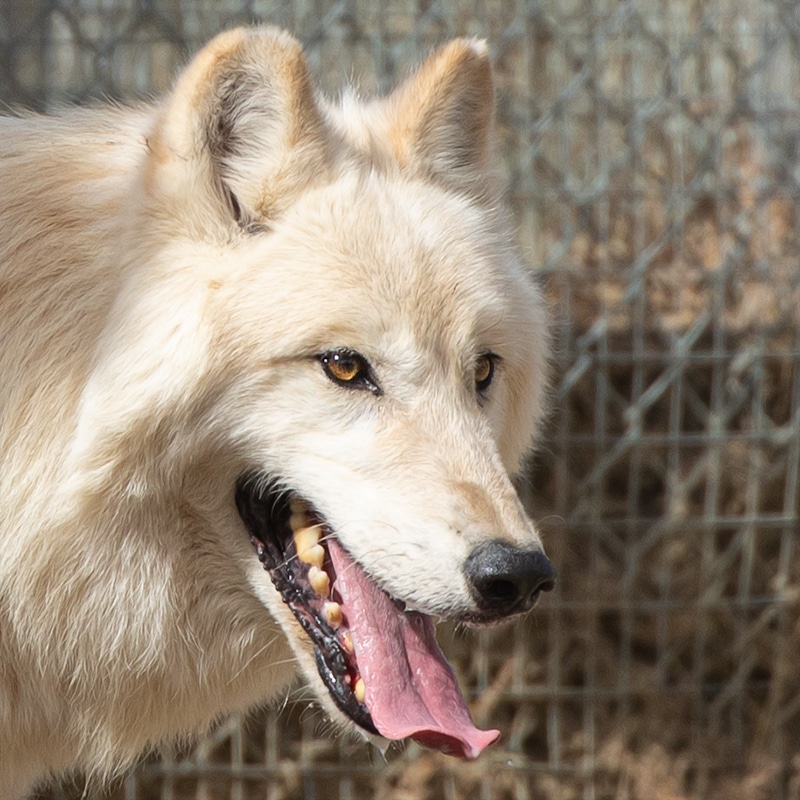 Male High-Content Wolfdog
He is 8 years old and his birthday is February 28th, 2013.

He is NOT on the Tour Path.
In October of 2021, just before the Wild Spirit team was meant to depart from New Mexico to New York to pick up rescues Kiska and Zeebie, our Executive Director, Brittany, saw a plea for assistance in an online group for wolfdog owners that caught her attention.

The author of the post was asking for advice on transporting an animal from West Virginia to New Mexico, stating that she was re-homing her animal and had experienced some *major* issues with attempting to transport him earlier that week.

Knowing that the Wild Spirit team would be out that direction, Brittany reached out to gather more information on the situation and to potentially offer a solution as well.

It was then that we learned about Sevro, a high-content wolfdog that had been privately owned by the family since 2013, but who had been giving his owners some difficulties since reaching sexual maturity in 2016. We learned that at that point in time, Sevro became very seasonally aggressive toward his primary caretaker, and so territorial of his enclosure that it became difficult for them to go inside and spend time with him.

While he was still somewhat social outside of the breeding season, they didn’t feel comfortable keeping him, and for years they attempted to find him another private home or sanctuary.

Upon hearing about Sevro’s issues, Brittany asked where it was that the family had been attempting to transport him in New Mexico. They stated that their original plan had been to re-home him to another family, but after attempting to sedate him for transport and seeing how panicked he had been, they no longer felt safe giving him to private-owners, and felt strongly that he required sanctuary placement.

At that point, Brittany asked if they would allow us to take him in and pick him up on our way back from the New York rescue. The family agreed, but upon the team’s arrival, they learned that Sevro was incredibly fearful of strangers, and he began pacing back and forth so frantically that we realized that he would likely need to be darted in order to remove him from his containment without risking his or our safety.

As a result, Brittany and Megan, our Animal Care supervisor, made a return trip just a couple weeks later, all of our necessary equipment in tow. Despite his anxious pacing, Brittany was able to sedate him with the use of a blow-dart gun, allowing us to remove him from the space rather easily. Just a few moments later, he was placed into our rescue van and reversed from sedation, popping up like nothing had ever happened!

On the return trip, Sevro remained calm and subdued (though still obviously nervous about his new kidnappers), which is quite common for new rescues. Thankfully, he spent the nearly 30-hour drive back home primarily resting, and upon arriving at the sanctuary, he was more than ready to explore his brand new enclosure! Best of all, he was placed next-door to mid-content wolfdog Motaki, who we hope to pair him with in the near future! Since being in his new home, Sevro has remained shy around humans, but we hope he will begin to warm up to us in time. And if not, we feel confident that he will have a sweet and fun-loving companion in Motaki, who will hope will help him feel right at home!