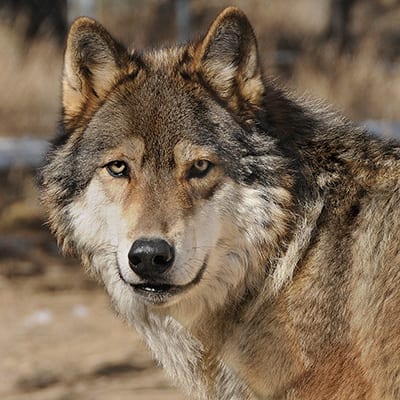 Kota is a high-content wolfdog. He is roughly 15 years old and his birthday is around May, 2007.
NOT on the Tour Path
Enrichment eligible 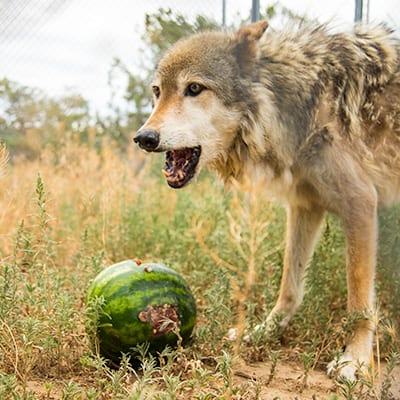 Kota is a neutered male high-content wolf-dog. He was born in 2007 and came to Wild Spirit Wolf Sanctuary in October of 2010. 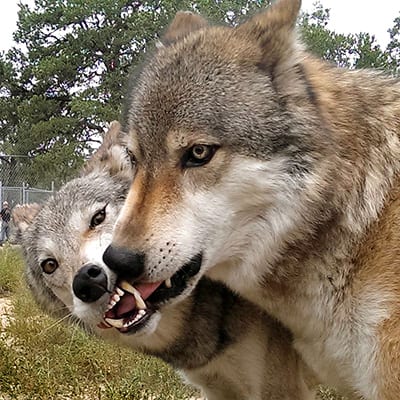 Kota is one of our biggest rescues at Wild Spirit Wolf Sanctuary and can be a bit intimidating for new volunteers. However, with an experienced caretaker that he trusts, he’s affectionate, playful, and sweet. When it comes to food, Kota can be a bit too possessive, so we separate him and Agana during mealtime.

Kota currently lives with a female high-content wolf-dog named Agana. Kota lived with Duchess until her passing in 2014, after which we introduced him to Agana. They hit it off right away!

Kota once met a film crew from National Geographic while they were at Wild Spirit Wolf Sanctuary shooting an episode of America the Wild. When they entered his enclosure, Kota immediately stole their large fluffy microphone cover and ate the entire thing! Fortunately, he passed it without issue, and no one was harmed.

As much as Kota loves his companion, Agana, he enjoys his alone time. He loves solo walks with his caretaker and his occasional trips to our One-Acre enrichment habitat, where he can “get away from it all” for a little while.

Kota never learned to share, and he hates having to compete with Agana for his caretaker’s attention. He also can’t stand seeing his caretaker walk by him holding a leash and choose someone else to take out for a walk instead of him! 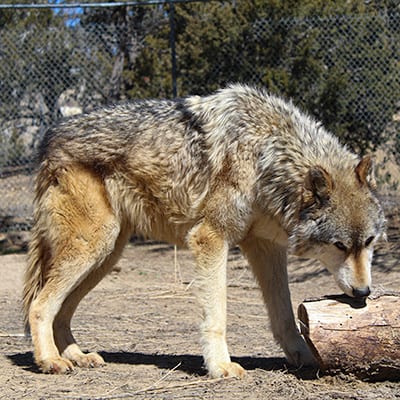 Our handsome high-content wolf-dog is easily the largest animal at Wild Spirit. When he stands on his hind legs, he is over six-feet tall. Unlike many of our residents, Kota was blessed with two caring owners, a young man, and his aunt. While the young man served overseas with the military, his aunt looked after Kota. Unfortunately, her health began to decline and she soon required hospice care. During this tough time, the young man’s mother arrived to care for Kota. With a young daughter and other obligations at home in Florida, she was not able to stay permanently. She called Kota’s breeder, who agreed to take him back temporarily but needed some help with transport. When she called Wild Spirit to help with transport, it was decided that it would be easiest for Kota to board with us instead of traveling so far from his home.

Sadly, Kota’s loving aunt passed away, and Kota’s future became uncertain. He was living happily at Wild Spirit with one of our older residents, Duchess. It was certainly not love at first sight, but they respected each other unless it was meal time. That small problem was resolved fairly easily – Kota was placed in a sub-enclosure during breakfast so Duchess did not have to fight for her meal. When Duchess passed away, we learned of another high-content wolfdog named Agana in desperate need of rescue. It’s never easy to place strangers together, but we were thrilled to watch Kota and Agana fall in love immediately. Having a young, feisty friend was a wonderful thing for Kota, and Agana was thrilled to have a companion after years of solitude. When his original owner was finally able to take Kota home again, he made the difficult decision to let him remain at WSWS, so he could enjoy a happy, stable life with his beloved companion.

Kota is a sweet boy who has stolen the heart of many volunteers, staff, and visitors to our sanctuary. Our huge, stunning boy caused quite a buzz among staff and volunteers when he first arrived. We were all amazed at his size and striking good looks! Kota is good-natured but he can be a handful, and he requires an experienced caretaker. Those who work with him need to understand how to interact with him while keeping themselves safe and Kota comfortable. Kota is playful by nature and will leap at his caretakers, grab limbs or loose clothing, and attempt to steal belongings like gloves and buckets. He is goofy and his excitement can lead to bruises or scratches on people he meets, but he is the perfect example of what we call wild-spirited and not mean-spirited. It’s sometimes difficult to imagine Kota living in a home, and we’re so glad he is here at WSWS where he can truly be himself.