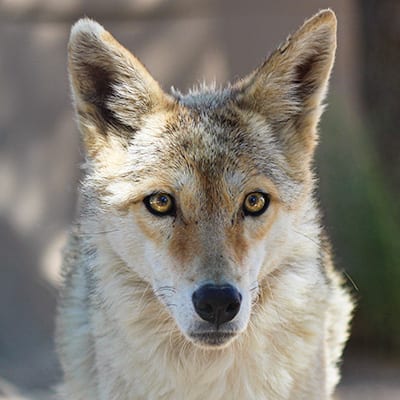 Lyla Rose is a coyote. She is 13 years old and her birthday is April 11th, 2009.
NOT on the Tour Path
Enrichment eligible 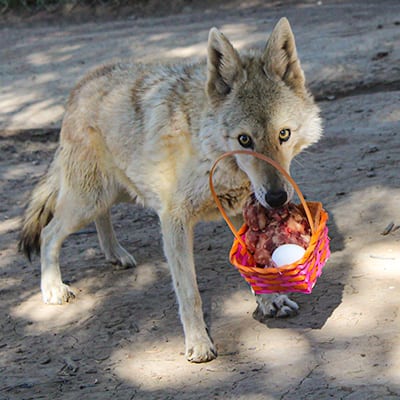 Lyla Rose is a spayed female coyote who was born in 2009. She came to live at Wild Spirit Wolf Sanctuary in May of 2014. 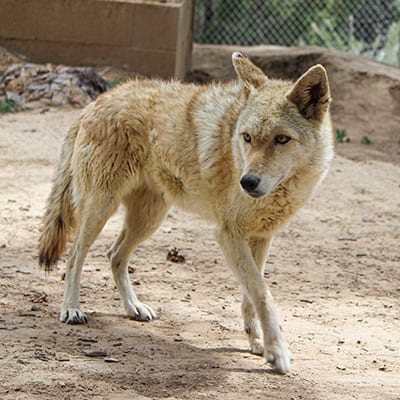 Lyla Rose is a shy and hands-off animal. While she has had relationships with people in the past, she no longer seems to wish for human interaction and as such, we keep a respectful distance. More often than not she is wary of people, especially tours, and keeps to the far side of her enclosure whenever people draw near.

Lyla Rose lives with a vasectomized male coyote named Jasa. They were brought to the Indiana Coyote Rescue Center separately as very young pups and have spent their lives together.

Coyotes can be several different colors, but Lyla Rose’s light gold coloration (known as “blonde phase”) is fairly unique. None of our other coyotes look like her! 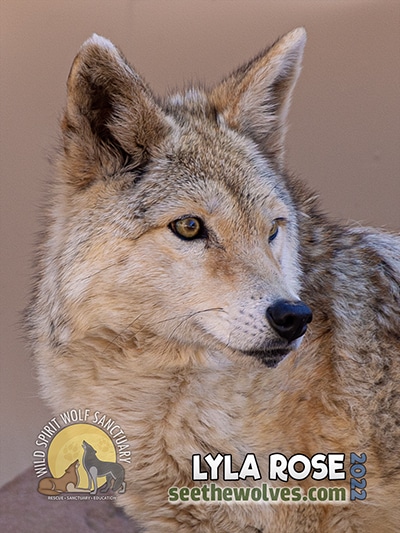 Lyla Rose has only 6 sponsors!

Surprisingly, Lyla Rose loves jazz and blues music! She loves when we bring a boom box to her habitat and play her some tunes.

Lyla doesn’t like new people; she will sit at the back of her habitat and wait for the group of strangers to move on. 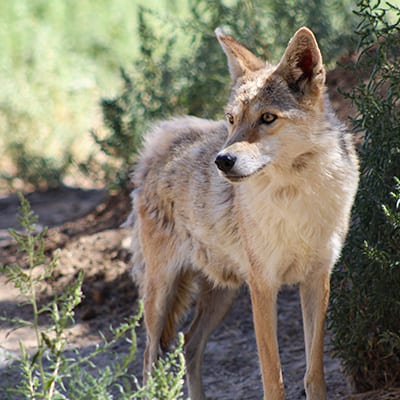 Our beautiful little fireball has a story like many other wild rescues. While walking in the of woods of Indiana one day, a family came across a newborn coyote who was so young, her eyes hadn’t even opened. The family thought she was a domestic dog and took her home to be their pet. A few weeks later, they realized that they had found a baby coyote.

When they realized the mistake they’d made, the family made the loving choice to find a better home for Lyla Rose. They contacted Indiana Coyote Rescue Center (ICRC) in the summer of 2009 and asked if they could take her. The rescue agreed and because Indiana laws mandated that Lyla could not be re-released to the wild as a result of being raised by humans, the intention was that she would remain there for life.

While living at ICRC, Lyla grew attached to a male volunteer that came once a week to spend several hours with her, but otherwise she wasn’t very fond of humans. Sadly, even though Lyla had been around people as long as she could remember, she started showing aggressive behavior towards her female Caretakers after she turned two years old. As such, when ICRC found themselves in need of more free space for rescues, Wild Spirit offered to take in some of their life-long residents. Lyla Rose, her habitat-mate Jasa, and an older female coyote named Angel moved to Wild Spirit in the spring of 2014. After Angel passed, we rescued coyotes Yuni and Maine, who are now Lyla and Jasa’s neighbors.

We’ve fallen in love with Lyla Rose’s pretty face and tough-girl attitude, and we know others will, too!