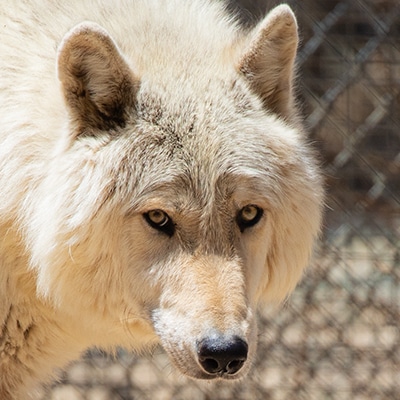 Mowgli is a high-content wolfdog. He is 4 years old and his birthday is April 28th, 2018.
NOT on the Tour Path
Enrichment eligible 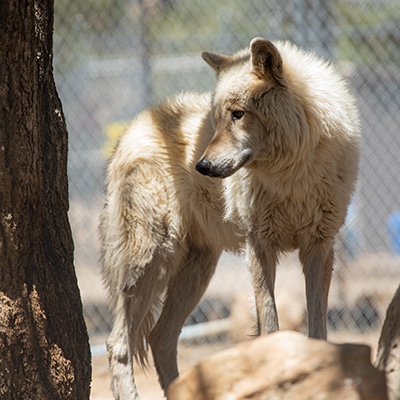 Prior to life at Wild Spirit Wolf Sanctuary, Mowgli was owned as a private pet in Colorado where he was loved and well cared for. Unfortunately, as Mowgli grew into sexual maturity, he became more difficult to manage and his family made the tough decision to re-home him. He arrived at Wild Spirit on April 17th, 2021, just a few days shy of his 3rd birthday. Our Keepers are still getting to know this handsome boy, but he’s already forming some solid relationships with us and female high-content neighbor, Agana. 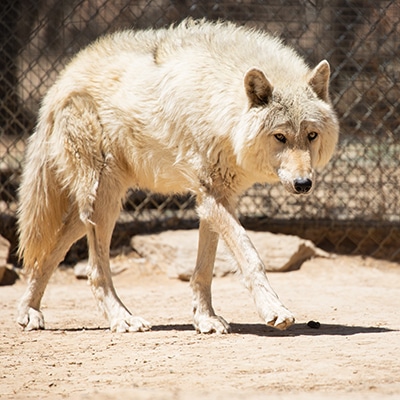 Mowgli is a sweet and social boy, but since arriving at Wild Spirit, he has been a bit uncertain about his new surroundings, especially in regards to our Animal Caretakers. For example, Mowgli cries for attention frequently, but is extremely picky about who he receives it from, and he hasn’t quite figured out how to engage with people appropriately yet, often pressing up against the fence for pets, then growling when someone approaches.

Naturally, this handsome boy is still settling in and getting comfortable in his new surroundings, so we believe that his behaviors are likely the result of stress and uncertainty. We are confident that as time goes by and he continues to settle in, Mowgli will transform into a completely different animal!

Mowgli previously lived with another male wolfdog who helped raise him as a pup. At Wild Spirit, he has recently moved in with rescue Agana, and he can often be seen following her around the enclosure giving her kisses. We are excited to see how their relationship continues to grow!

Mowgli enjoys being hand-fed, a method often used by many experienced wolfdog owners to reduce their pet’s resource-guarding behaviors. In fact, when he first arrived, it took several days before he would consume his full meals, and despite trying lots of different foods, we couldn’t determine the reason why. Finally, we attempted to hand-feed him, and from that day on, he has been eating any and everything without issue! 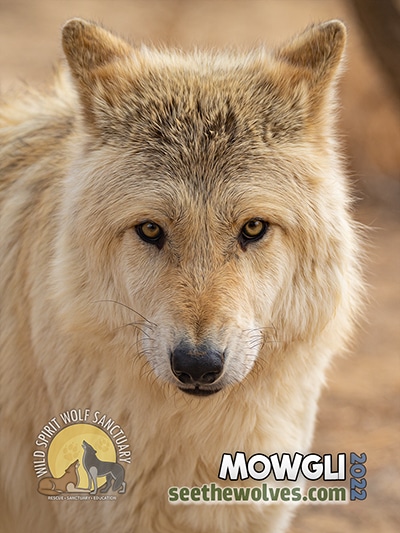 Mowgli has only 8 sponsors!

We’re still learning all of Mowgli’s unique quirks, but right now we know that he loves our Executive Director, Brittany McDonald, who often has a way with the more “difficult” rescues. She is currently one of the only people who Mowgli will allow to pet him, or enter into his enclosure.

As for dislikes, Mowgli hates to be ignored, amping up in frustrating any time someone walks by his enclosure without stopping to interact with him. This is especially funny, though, considering that anytime some does try to interact, he growls at them immediately. 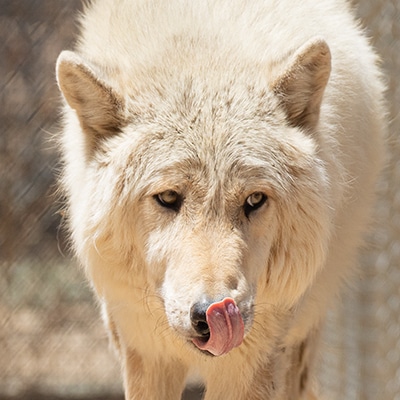 In April of 2021, Wild Spirit Wolf Sanctuary received an intake request for Mowgli, who was living as a privately owned pet on a cattle farm in northern Colorado. Like many of our more recent rescues, Mowgli was loved and well cared for by his owners, but unfortunately, as he entered into sexual maturity his behaviors began to shift dramatically. For example, he became increasingly unpredictable, sensitive to certain types of touch, and altogether, difficult to interact with safely. In addition, he killed another family pet that lived in the enclosure next to him, which solidified his owners’ decision to seek out sanctuary placement.

Wild Spirit reached out with the offer to take Mowgli in immediately, confident that we could offer him a safe and secure forever home where we are fully equipped to manage even the most intense canine behaviors. Thankfully, after a couple of conversations about Wild Spirit’s set up, his owners agreed to place him with our facility, and staff loaded up the van to make the trip to Colorado!

Though Mowgli was raised to be a very social animal, the rescue team went into the trip prepared for anything, but allowed his owners to take the reigns on getting him loaded. In fact, to keep from spooking Mowgli, the crew parked the van a half mile down the road from his house while his owners got him ready to go with a collar and leash. This process alone ended up taking an entire hour, as Mowgli was very touch sensitive around his collar, and simply did not want to leave home! But as soon as he was leashed, the team made their way to the house and had their first looks at the new rescue. They were in awe of the handsome high-content and could hardly contain their excitement! However, as much as they wanted to jump out and say hello, they were forced to wait patiently, completely out of sight at the request of his owners, while they loaded him into the vehicle. Luckily loading him into the van went flawlessly, and the team was soon back on the road, headed for home, but the excitement didn’t stop there! Staff drove all through the night and even encountered a snow storm on the way, and Mowgli, proving to be a very brave and adventurous animal — even climbing up into the open cubby above the cab!

Fortunately, upon arrival in his new home, Mowgli was easily transitioned into a large crate so he could be safely transported to his new enclosure, right next door to potential future companion, high-content wolfdog, Agana!