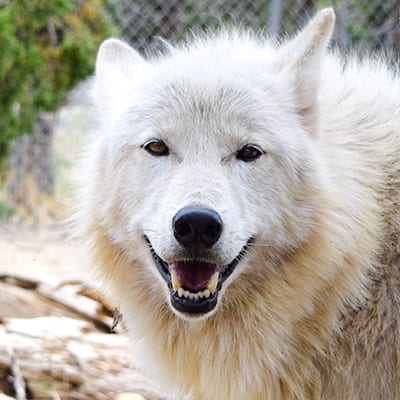 Luna is a low-content wolfdog. She is 10 years old and her birthday is April 22nd, 2012.
NOT on the Tour Path
Enrichment eligible 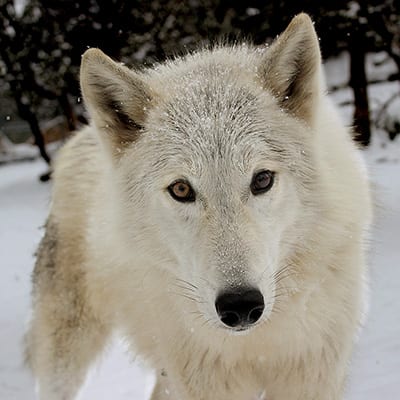 Luna is a spayed female low-content wolf-dog. We rescued her in 2014 when she was 2 years old. 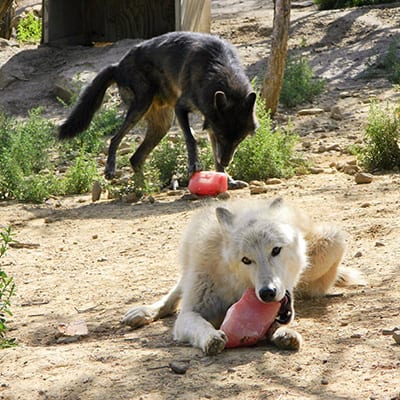 Luna is a very sweet and easily excitable girl! She is full of energy, always on the move, and extremely playful. She still gets a little nervous once she is up close and personal with people, and it takes a long time for her to trust someone enough to let them pet her. Luna is easily stressed by large crowds, so we keep a close eye on this girl during busy days.

Luna lives with a very handsome high-content wolf-dog named Jaeger. Their habitat is not on our tour path because the both of them prefer fewer people around.

Luna was welcomed to Wild Spirit on Friday the 13th, the night of the full moon! She has also proven to be a highly skilled escape-artist, easily climbing right over 12 foot-tall fences. 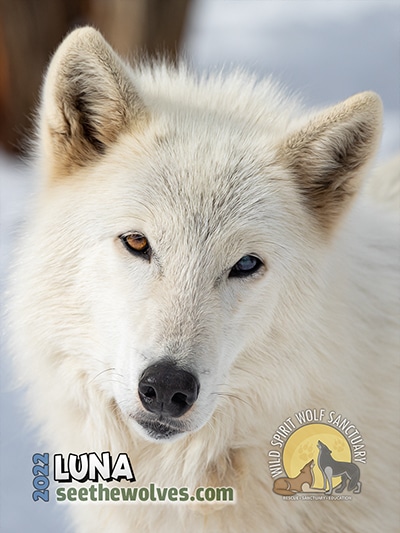 Luna has only 8 sponsors!

Luna loves getting treats, and if she’s in the mood for attention, she loves when her caretaker pets her and gives her treats all at the same time! She likes to splash in her water bucket and her tub, too.

Above all else, Luna hates captures. We safely capture our shy rescues for vet care or if they have to be relocated. It doesn’t matter if it’s her or someone else we’re trying to catch – either way, she’ll try to climb right out of her habitat! 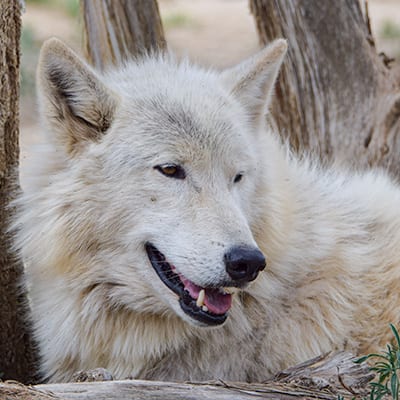 On Friday the 13th, 2014, on the night of the full moon, a beautiful girl named Luna arrived at Wild Spirit Wolf Sanctuary. You would never guess by her sweet disposition and constant smile that this girl is full of birdshot, tiny lead pellets found in a shotgun shell.

As far as we know, Luna has had two homes. Apparently, her first caretaker boarded her so frequently that they decided to rehome her. Luna got away from her next owner in the spring of 2014. She was recaptured but escaped out of the vehicle almost immediately. Over the next two weeks, she traveled almost nine miles following a creek bed near subdivision neighborhoods. Rhonda Tucker, who runs a no-kill shelter, went out every day with a dog to help with the search.

“I brought a dog with me every time I went out to look for her. The minute she saw me with a boy, she’d come running and would be play-bowing and jumping all around us. I don’t know how many times I watched her jump into back yards with strange dogs. She would flirt and play and was never, ever aggressive … once even with a tiny, little Maltese! The whole time I was tracking her down, she never seemed stressed. She seemed to be having the time of her life, free from confines.”

Animal Control Officers in Missouri were called to help capture her. Some were able to hand-feed Luna, but the gentle runaway would always shy away whenever she saw a leash. At night, she would sleep on front porches or some other place very close to a house. Several people tried to gain her trust with the help of their children, other dogs, traps, and all kinds of food. She never showed aggression, she just wouldn’t let anyone touch her.

One day in late April, Luna unknowingly transformed from flirty free spirit into dangerous outlaw. The story goes that she startled some children while they played in their yard, and they began to scream. Thinking she might be a wolf, the children’s dads armed themselves with guns and set out after Luna. They tracked her for over a mile and finally shot her in someone’s backyard. Being the master runaway, she managed to escape again and disappeared into the woods. The men thought their shots had been fatal.

For the next three days, Luna limped around, bleeding from her face and front legs, her whole side covered in blood. Thanks to tireless efforts of thoughtful folks, Luna’s adventure groggily ended when she ate a hot dog laced with a sedative. She was leashed and taken to the shelter where a vet could examine her. X-rays confirmed that she had dozens of lead pellets lodged inside her, mostly in her head, face and front leg. Only a few of them could be removed. As a result of the injuries, she is mostly blind in her left eye. The men who shot her were charged with misdemeanor animal abuse.

We are so thankful to all those who helped save Luna’s life and find her sanctuary at WSWS. Now, Luna is safe and living happily with one of our most handsome boys, Jaeger. She is surrounded by other canine friends and grows more comfortable with her new life every day. Sadly for her boyfriend, she is still a hopeless flirt and can’t wait to see other boys pass by her habitat while out for walks. Despite her hardships and suffering, Luna’s intense love of life is inspiring, as is the love of all those who helped bring her to safety.