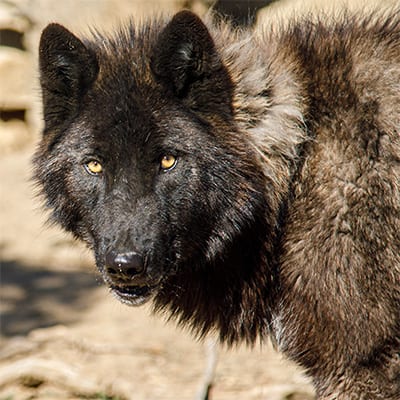 Lobo is a mid-content wolfdog. He is roughly 4 years old and his birthday is around February, 2018.
NOT on the Tour Path
Enrichment eligible 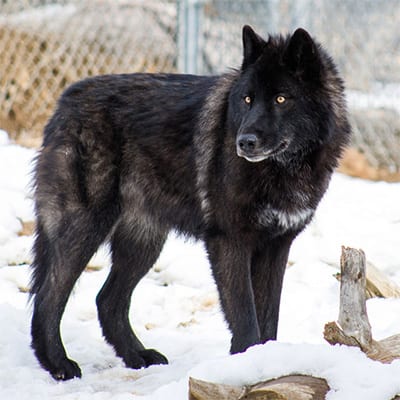 Lobo was rescued in September of 2018 when he was only about seven months old. He was a relocation from another facility, Southwest Wildlife Conservation Center, after being reported and captured. Lobo is neutered and in excellent health. 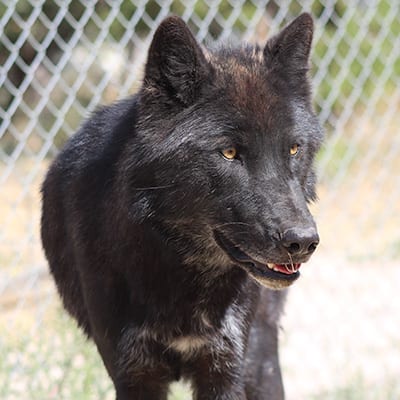 Lobo is a more timid fellow, though nevertheless incredibly sweet. As he has grown into an adult, Lobo has gained confidence thanks in large part to his friend, Flicker. He observes her closely, especially when she dares to approach caregivers to receive nose-boops and chin-scratches, and slowly he has shown increasing interest in receiving more attention for himself. Playful, intelligent, and ever curious, Lobo adores receiving new enrichment and items to investigate.

Lobo lives with rescued low-content wolf-dog, Flicker. The two youngsters seem to really love each other!.

Lobo enjoys eating oranges, which are provided as an olfactory enrichment. After batting around the orange and chasing it, eventually he tears into the fruit, discarding the peel. 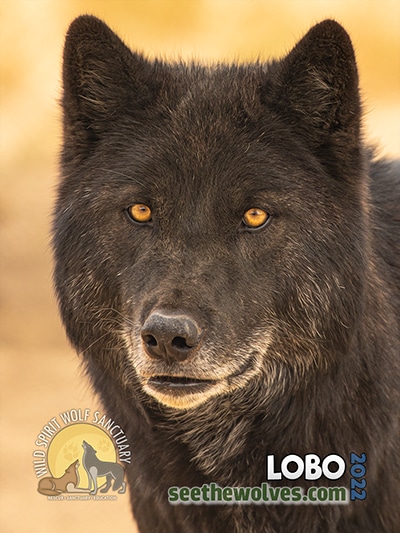 Lobo has only 5 sponsors!

Lobo and Flicker both love to romp every morning in play. They take turns chasing each other around the habitat after wrestling, bowing, and grumbling at each other with joy. Lobo often asks Flicker to play by nipping and tugging at her tail or pawing at her face.

While it is not exactly a dislike, Lobo finds it intimidating, as a shy boy, if caregivers happen to stare at him for too long, especially directly in his eyes. Eye-contact is not generally a concern with the rescues, but it can be scary for those who are timid. Except for high-content wolf-dog, Kota, who gets mad really quickly if you stare directly at him in the eyes! 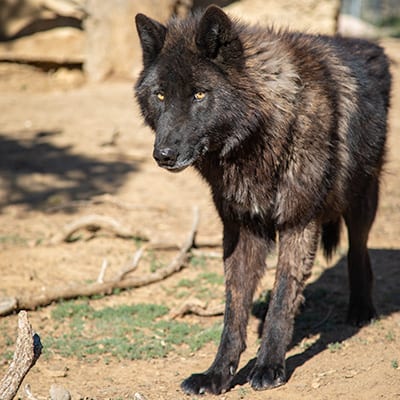 In July of 2018, a woman was surprised to observe a wolf-dog wandering her farm in Arizona. Young not-yet-named-Lobo was not aggressive or frightening in any way, and instead he began to hang around the farm animals, eventually making friends with her dog. Lobo even walked up to her cat without displaying any signs that he would hurt it.

The woman began putting food out for her new guest. Over time, Lobo became so comfortable and trusting that she was able to feed him out of her hand. Although he was safe at her farm, the woman was worried that he might venture onto another person’s property where he wouldn’t be as welcome. As a result, she made the thoughtful decision to get help in finding Lobo a safe and permanent place to live. Thankfully, the amazing folks at Humane Animal Rescue and Trapping Team (HARTT) stepped in to help. The capture of Lobo was successful with the team using a drop net and luring him under it with food. Learn more about HARTT here at https://azhartt.org.

After his capture, Lobo was transported to the Southwest Wildlife Conservation Center (S.W.W.C.) where he stayed for almost two months in an empty bear habitat. While the center searched for permanent placement, the Rescue Coordinator at W.O.L.F. contacted Wild Spirit Wolf Sanctuary to see if we could assist Lobo. At the time, the team was actively looking for a new companion for low-content wolf-dog rescue, Flicker, so arrangements with S.W.W.C. were made to welcome Lobo home. The rest, as they say, is history, and Lobo and Flicker have proven to be an amazing match!