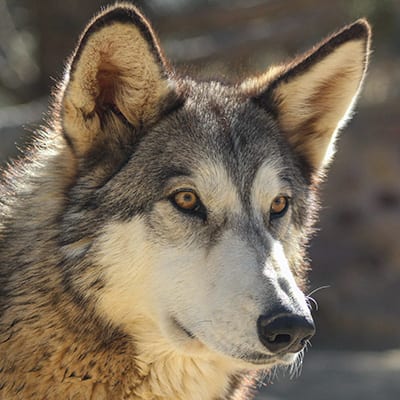 Flicker is a low-content wolfdog. She is 6 years old and her birthday is February 26th, 2016.
NOT on the Tour Path
Enrichment eligible 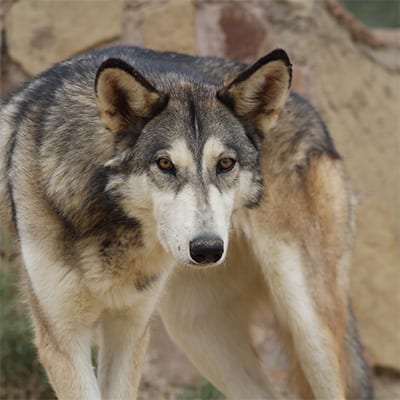 Flicker is female low-content wolf-dog. We rescued her in March of 2017 when she was just over 1 year old. 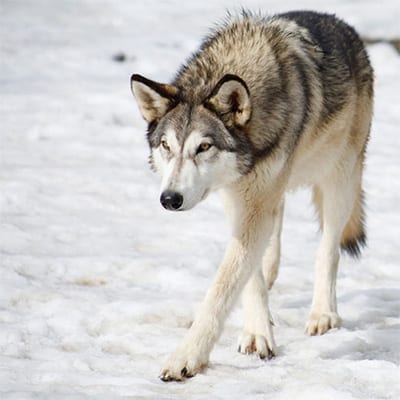 Flicker is a high-strung girl, and she has already proven to be an extremely gifted escape artist. Being contained makes her terribly nervous, especially when there are people present. However, since arriving at Wild Spirit, Flicker has settled considerably. We’re starting to see just how sweet, playful and happy she will be here.

Flicker originally lived alone and then lived with Rayne after his habitat was made a bit more secure. When the pair was first introduced, Flicker was much more interested in escaping her new habitat than spending time with Rayne! Each morning, Rayne would visit Flicker in her roofed habitat to enjoy breakfast side-by-side! We are so glad they got to spend a few happy months together. She now lives with ultra-handsome escape-artist, Lobo.

Flicker has some of the biggest ears we’ve ever seen! She looks like she could fly away! When she’s meeting other rescues, we can easily tell how she’s feeling about them based on her big, goofy ears. When she’s happy and feeling silly, they move up and down like wings. 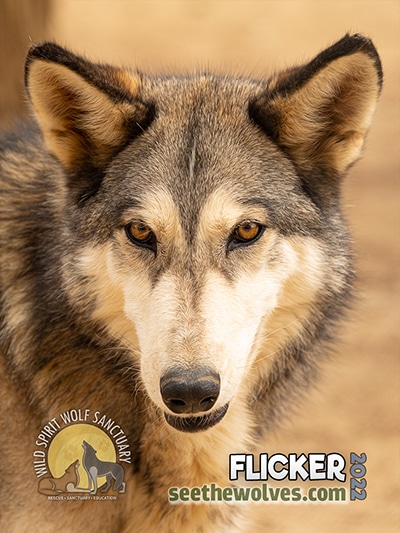 Flicker loves food and treats! She’ll jump up and down from her house in the morning to see if she can spot her caretaker bringing breakfast. She also loves flirting with her neighbors and animals that pass by.

Flicker dislikes crowds of people, being confined to a small space, and most men. She’s wary of all humans, but she’s getting more comfortable. 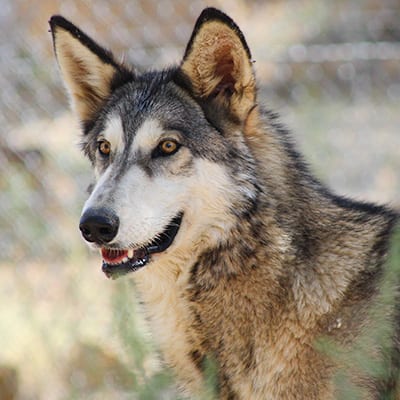 Flicker was purchased from a breeder in California when she was 4 months old. Her new owner had visited the breeding facility and been absolutely horrified by what she saw – dirty enclosures stretching as far as the eye could see, very little shade in the hot sun, and too many animals to count. She couldn’t stand the thought of all those poor dogs and wolf-dogs suffering in such a place, so she took Flicker home. Flicker, already 4 months old, had not been socialized as a young puppy and her owner quickly realized that she was at a serious disadvantage because of that late start.

Flicker was excruciatingly shy and skittish. Even in her new home, if someone moved too quickly she panicked. Standing up from sitting without warning could make her bolt. Her anxiety made her life miserable and after several escapes and much suffering, her owners decided to pursue medication. They put her on anti-anxiety meds at the recommendation of their vet. Although the pills helped inhibit her reactions, they didn’t actually make her any happier. When faced with enough fear, Flicker still panicked and took off.

When Flicker was almost a year old, her owners decided that she needed to be somewhere where she would feel safe and secure, and their home clearly was not that place. They made the difficult choice to contact our staff here at WSWS and we reviewed her case. Flicker certainly sounded like a risk, given her history of escapes, but we also needed to find a new companion for Rayne, and Flicker seemed like she could be the one. We decided the risk was worth the reward, so Leyton planned to go pick her up.

While we were getting ready to drive to California, Flicker escaped her home yet again. This time, she was not easily re-caught, and for two weeks she was running loose in her neighborhood, too skittish to let anyone get close to her. At first we waited for her to be brought home, and when that didn’t happen, Leyton decided it was time for us to intervene. He packed the van and set out to catch poor Flicker himself and then bring her home to safety.

Some careful planning, a lot of waiting, and a few handy tools later, Leyton had successfully tranquilized and caught Flicker. He loaded her up and drove her home to WSWS, where we introduced her to Rayne. Although Rayne was thrilled, Flicker wasn’t too interested – all she wanted was to figure out how to get out of the habitat. And she did, just a couple of hours later! Thanks to quick planning and the help of some weekend warriors, she was kept inside the perimeter fence and recaptured. We moved her to a temporary habitat with a roof and began to brainstorm some habitat upgrades that might encourage her to stay put once she moves back in.

For now, Flicker is cooling her jets, learning our routine and familiarizing herself with caretakers. She loves all the space she has to explore in her new, large and secure habitat. We hope to increase Flicker’s quality of life to the point where she’s no longer afraid and instead, actually begins to fully appreciate all the perks of sanctuary life.