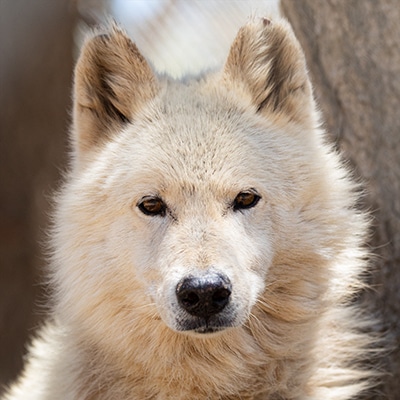 Kirito is a low-content wolfdog. He is 10 years old and his birthday is March 15th, 2012.
NOT on the Tour Path
Enrichment eligible 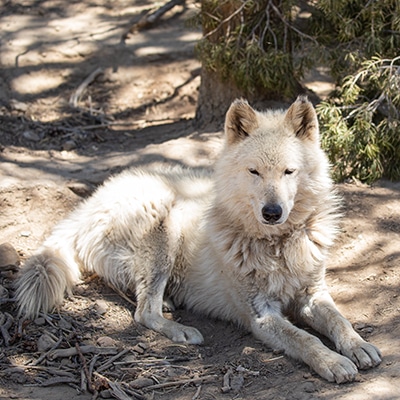 Kirito was an instant hit with the staff and interns, due to his adorably small size and super friendly personality! 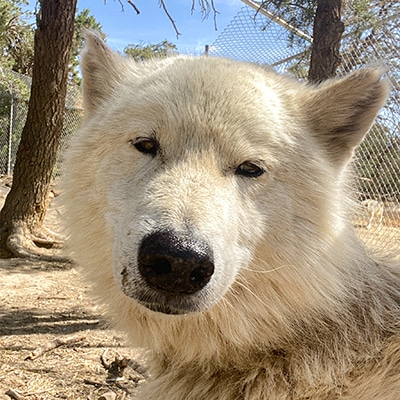 Kirito is an extremely sweet and social boy who absolutely loves human interaction. Unfortunately, according to his previous owner, he does demonstrate a number of undesirable behaviors that forced her to seek out sanctuary placement. For example, he is said to be an escape artist that demonstrates aggression in the presence of other male animals, and around high-value items such as food.

Kirito is currently living the bachelor life, but we are hopeful that he will be the perfect match for high-content wolfdog, Sox, who was taken in in October of 2020.

Kirito was rescued on the same day as two other wolfdogs (not owned by the same person), and all three animals were named after characters from books, movies, or games! Kirito is named after a character in the popular Japanese anime, “Sword Art Online”. 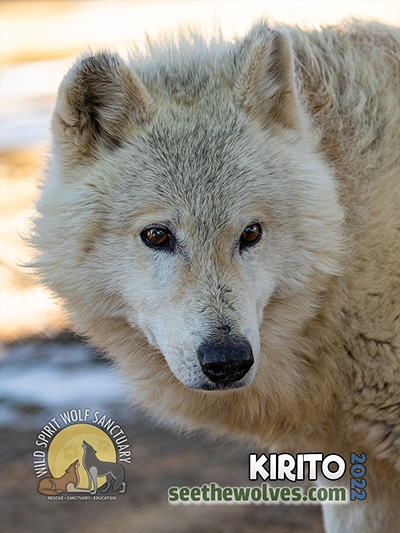 Kirito has only 6 sponsors!

Kirito seems to love everyone he meets and greatly enjoys walks around the sanctuary! He is also a huge fan of car rides, as we discovered during his trip from Alabama to New Mexico!

Kirito doesn’t like when people or animals go near his food or treats, and has no problem telling them to keep a safe distance away. 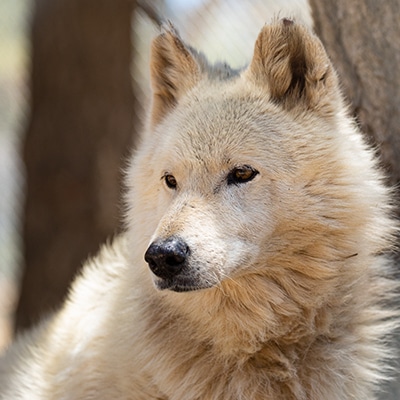 Wild Spirit Wolf Sanctuary is actually Kirito’s third and final home. Before this, he was kept as a privately-owned pet that was neglected by his original owners, resulting in the need for a new home. Thankfully, his second owner was much more willing to give him the love and care that he needed, even going so far as to begin treating his heartworms — a condition that he has likely had for years in his previous home — and raising the funds needed to provide the best care that she could for him.

Sadly, despite all of his new owner’s efforts, Kirito was still a handful, demonstrating a number of undesirable behaviors that made him a complicated pet to house, especially with her other animals. As such, she made the difficult decision to re-home him and posted him online in a group that specializes in the placement of wolfdogs, where Wild Spirit’s Executive Director saw him listed and reached out for more information.

Upon speaking with Kirito’s owner, we gained a full description of his personality, behaviors, and medical needs (specifically, that he is heartworm positive), and determined that despite the fact that he is a low content and social with people, he would be extremely difficult to find placement for all things considered. As such, we agreed to take him in, knowing we could give him the love and care he needs for the rest of his days.

Fortunately, the Wild Spirit team was already planning a separate rescue trip to Alabama, and Kirito’s owner, who actually lived with him in North Carolina, graciously agreed to transport him to Alabama to meet us, shaving over 12 total hours from the trip! Even better, Kirito was amazing for the entire car ride to Alabama, then even further back to New Mexico. And upon arrival at the sanctuary, he was placed into a massive enclosure where he quickly greeted his next door neighbors and said hello to each member of our human team!