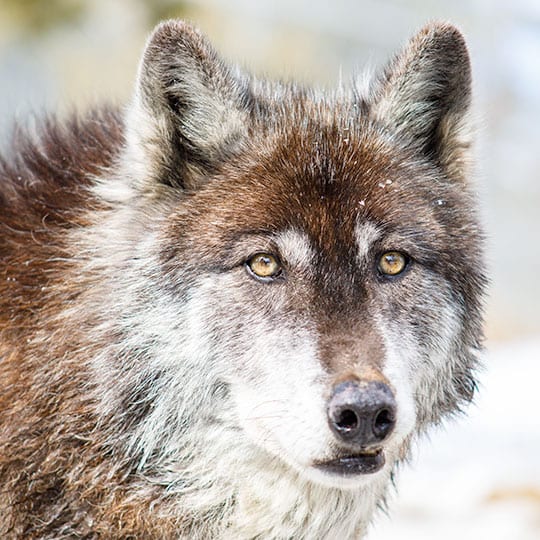 Jaeger is a high-content wolfdog. He is 12 years old and his birthday is May 9th, 2010.
NOT on the Tour Path
Enrichment eligible 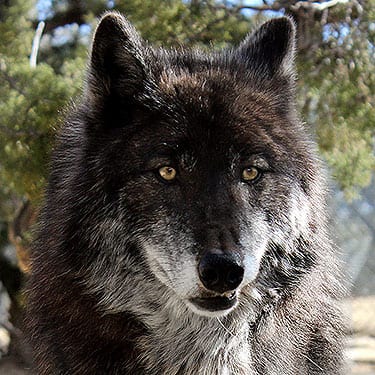 Jaeger is a neutered male high-content wolf-dog. That means he looks and acts like a wolf but has some dog in his history. We rescued him in 2010 when he was around one year old. 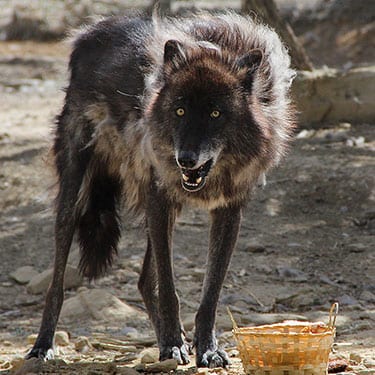 Jaeger is very sweet and playful but retains his wild spirit which makes him skittish and shy. Even the wind frightens him when it blows too hard! He gets along well with other canines and had a domestic dog for a friend in between habitat-mates.

Jaeger lives with rescued low-content wolfdog, Luna. The two are one of our sweetest companion pairs and are often seen lounging together, or playing with their neighbors through the fence.

Jaeger will almost always approach people he knows he’ll never see again. These lucky strangers might get some kisses and even be scent-rolled on! However, Jaeger is actually one of our pickiest rescues and rarely lets his Keepers get too close to him. 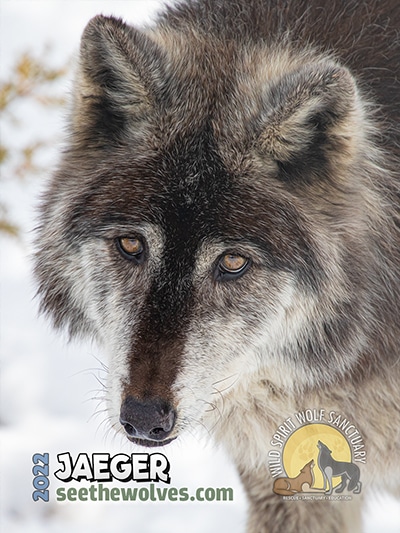 Jaeger has only 9 sponsors!

Like most true high-content wolf-dogs, Jaeger is naturally shy. Crowds, sudden movements, and even the trees swaying in the wind make him very nervous. 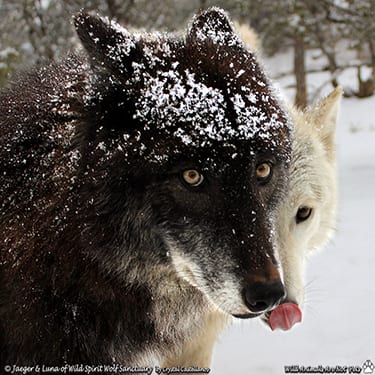 Jaeger was born at a breeding facility in Alaska. The owner kept his breeding wolves in heartbreaking conditions on short chains. Although the facility was named, Wolf Country U.S.A., the man was selling high-content wolf-dogs because it is illegal to sell and own pure wolves in Alaska. He misled folks who bought puppies from him by telling them that their wolf-dog would be just like a domestic dog. Thankfully this facility has now been shut down.

Jaeger was purchased when he was only four weeks old. After bringing him home, his owner quickly realized the difficulties of owning a wolf-dog. She had to pay for an expensive operation after Jaeger swallowed a piece of his toy that he had shredded to pieces, and watched as he destroyed furniture and ate anything that appeared interesting. All canine puppies are a handful, but with a stronger bite and wilder nature, wolf-dog puppy destruction reaches a new level. Although his owner loved Jaeger very much and had built a strong relationship with him, she realized that her small house and un-fenced yard was not the best environment for him.

She originally contacted W.O.L.F., an organization that helps to place wolf-dogs. She was given the information about a new owner in Seattle and Jaeger found his new home. Unfortunately, after only spending one day with this new owner, Jaeger became more than the man could handle. He brought the puppy to a woman named Kim Kahl. She fell in love with the charming Jaeger but felt it would be best if he came to Wild Spirit. Our director, Leyton, had made an earlier trip to Wolf Country and knew about the facility. He’d even seen Jaeger there as one of the pups up for sale! We agreed to provide Jaeger with a permanent home and drove to pick him up. After spending a day getting to know Jaeger, we leashed him and brought the sweet boy home to Wild Spirit Wolf Sanctuary.