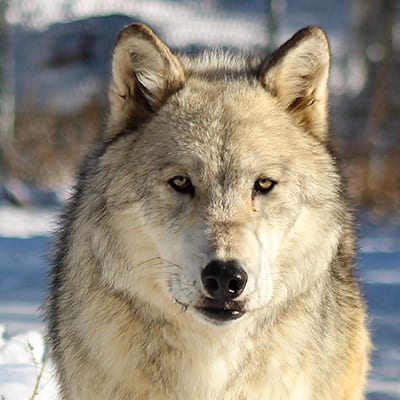 Draco is a high-content wolfdog. He is 7 years old and his birthday is April 20th, 2015.
NOT on the Tour Path
Enrichment eligible 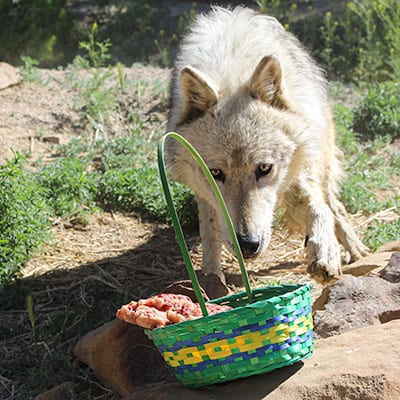 Draco is a neutered male high-content wolf-dog. We rescued him in July of 2017 when he 2 was years old. 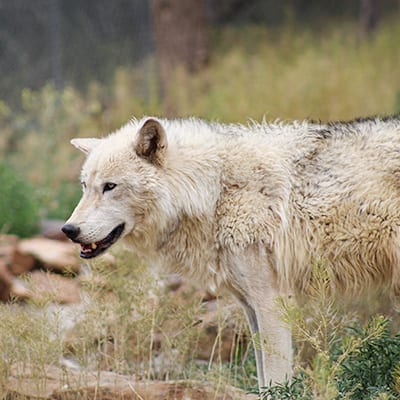 Draco is a shy animal who prefers the company of other canines to that of humans. He absolutely adores his companion Leia and is often seen running and playing with the animals that share their fence line. It takes Draco a long time to warm up to most people but once he does, he enjoys soft pets and chin scratches.

Draco lives with spayed low-content wolfdog, Leia, with whom he is incredibly bonded. The two can often be seen flirting with one another – an activity that usually transforms into running and rough-housing.

Draco has some of the longest canine teeth we’ve ever seen! When he was initially rescued, the first thing staff noticed were his vampire-like fangs. 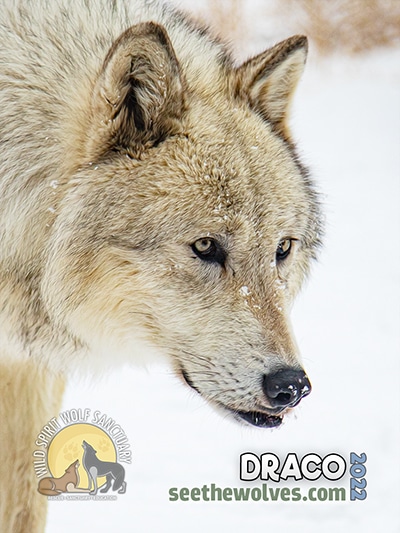 Draco has only 8 sponsors!

Draco absolutely loves anything to do with food. His favorite items are frozen loaves and enrichment such as pelts, skulls, and large meaty bones.

Understandably, Draco isn’t the biggest fan of tours. We can’t blame him – not everyone wants to be the center of attention! 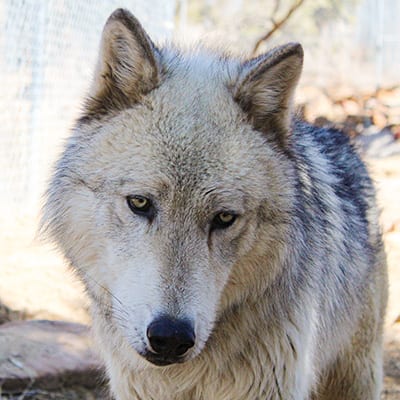 When we first heard of Draco (formerly named “Koda”) he was living as a pet in Colorado. He was only 2 years old and although his owners loved him, his natural behaviors were becoming a problem for them. Like any wolf or high-content wolfdog, Draco has a song to sing and he would howl loudly throughout the day and night. It wasn’t long before the neighbors had enough and complained to Animal Control, who gave his owners two options: re-home him or he’ll be confiscated. Desperate to provide a good life for their beloved wolfdog, his owners reached out to various sanctuaries to see if anyone could help him.

Soon Draco’s story had made its way through the wolfdog rescue network and the team at W.O.L.F. Sanctuary thought of us. Their sanctuary was at capacity, but the rescue coordinator had been touched by Draco’s story and the unfairness of his situation and was determined to find him rescue. When W.O.L.F. reached out to the Wild Spirit Team, we had 3 single female wolfdogs who needed companions and hoped Draco could be the perfect match for one of our girls and have his life saved at the same time. Hoping for the best, Wild Spirit staff set out for Colorado to bring our newest rescue home to the sanctuary.

Once in Colorado, staff instantly saw how much Draco’s owners cared for him and wanted the best for their wolfdog. After a meet-and-greet, Draco was loaded into the rescue van without issue and our team prepared to make the trip home.

Draco left Colorado and his old life behind, and he also left his name there, too. Draco was previously known as “Koda”, but we already had animals named Kota, Lakota, Dakota, and Nakota, so we felt that a new name was necessary. Not only was Draco young enough to learn a new name, we felt that changing his moniker could give him an entirely fresh start for his new life! After much brainstorming, we settled on Draco.