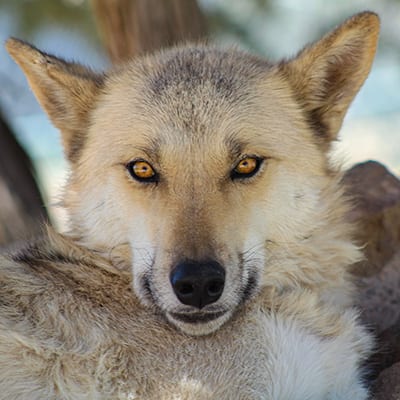 Leia is a low-content wolfdog. She is 5 years old and her birthday is June 4th, 2016.
On Tour Path
Enrichment eligible 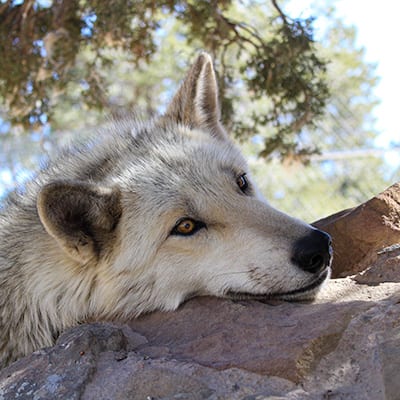 Leia is a spayed female low-content wolf-dog. This means she is mostly dog but has a bit of wolf in her history. We rescued her in September of 2016 when she was 3 months old. 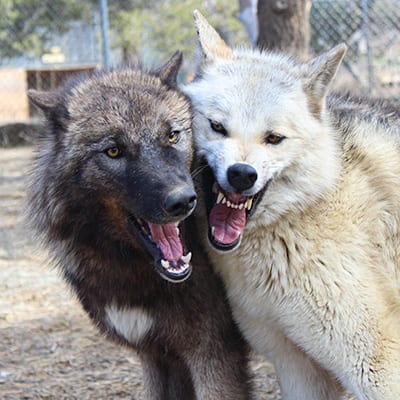 Leia is an incredibly sweet and social girl who adores interacting with her Caretakers. Her favorite types of socialization involve either sitting or lying down for pets and, of course, belly rubs! While she is usually very polite and well-behaved while interacting with humans, sometimes her energy gets the best of her and she is forced to play instead with companion, Draco, who is much more suited to her rough-housing.

When she was first rescued, Leia lived with her brother, Quinn. After their sister Lyca came to live at the sanctuary, Leia left her siblings to live with Arctic wolf, Storm, until he later joined the Big Pack in the Sky. Today Leia lives with neutered high-content wolfdog, Draco.

Leia has at least three relatives that also call Wild Spirit Wolf Sanctuary their home: Quinn (brother), Lyca (sister), and Kabbalah (father). It’s also possible that low-content wolfdog, Mystique, could also be a relative, though less is known about how she fits in with the rest of the group. 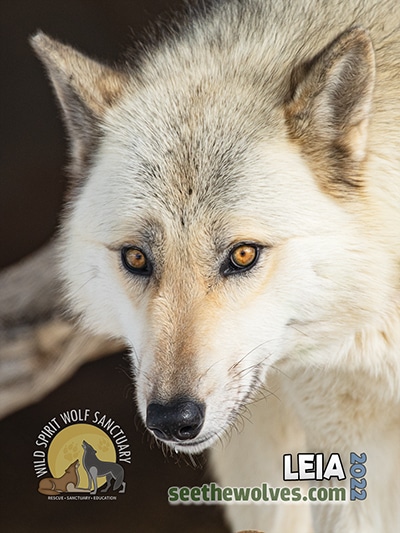 Leia has only 4 sponsors!

Leia absolutely loves spending quality time with the members of our Animal Care Team, and would easily spend hours out of her day basking in our affection if she could. Raised at Wild Spirit Wolf Sanctuary from the time she was a puppy, Leia is leash-trained and enjoys going for walks, especially when she gets to visit with some of our other rescues such as Naia and Flurry!

Leia’s siblings, Quinn and Lyca, also live at the sanctuary. While she loves her brother Quinn, she does not get along well with sister Lyca. 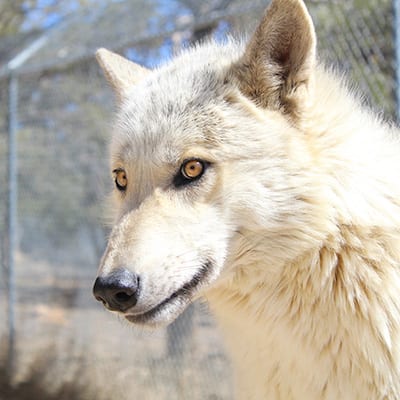 Like most of our rescues, Leia has a heartbreaking and traumatic past. The story of her rescue began when a wolfdog escaped from horrible conditions and was running loose in a California neighborhood, struggling to survive. Everyone thought the poor canine was a pure wolf at first, and she soon caught the attention of two celebrities living in the neighborhood. Grammy-nominated singer/songwriter/producer Meredith Brooks commented, “I was inducted into the world of breeders, hoarders, exploitation of illegal exotic animals, neglect, and abuse of the innocent when I looked out my window and saw a wolf on my little street nestled in the canyon.” Ms. Brooks’ celebrity neighbor and fellow animal champion also stepped in to help. Reality star/model and founder of Angels for Animal Rescue, Joanna Krupa, worked hard to gain the wolfdog’s trust and soon she was comfortable approaching Ms. Krupa as she sat on the ground. Her efforts brought more attention to the situation and also demonstrated to people that the “wolf” was not dangerous. Thankfully, she was eventually captured and has started a new life at another sanctuary.

Upon capturing the wolfdog, it became clear she had broken free from a terrible place where dozens of animals were still suffering. Over 60 domestic dogs, wolfdogs, exotic cats, and birds were trapped in a home in the same neighborhood as Ms. Brooks and Ms. Krupa. They were suffering from an overwhelming number of health issues including giardia, anemia, malnutrition, tumors, infected masses, cancer, worms, ear mites, kennel cough, and broken teeth. The conditions were so horrible that the troubled woman keeping these poor animals eventually faced criminal charges. Thanks to Ms. Brooks’ and Ms. Krupa’s tireless involvement, most of the animals received much-needed medical treatment and were adopted or taken to sanctuaries. Because they were all considered evidence in the case against their former owner, the whole process was much more complicated. The wolfdogs were perhaps the most difficult to place since most animal agencies consider them to be dangerous and unadoptable. Eventually four of them were taken to Los Angeles Animal Shelter (LAAS), including Kabbalah, Mitzi, Shomo, and one pregnant female named Nushmua.

While at the shelter, their circumstances, unfortunately, grew worse. Nushmua gave birth to her pups, but she was so traumatized that she resorted to the unthinkable, and her pups were removed when it was discovered that she had killed one and seriously injured another. The surviving pups went to another shelter where they recovered from their rough beginning and received great care.

Unfortunately, the remaining adults were isolated in cement-bottom cages at LAAS for over 6 months without exercise or human contact. They were depressed, scared, and their muscles began to atrophy from lack of movement. They also developed skin issues from sitting in their own urine. Kabbalah, Leia’s father, began slipping away because of conditions at LAAS. Still involved and hoping to see a happy ending for these animals, Ms. Brooks contacted Wild Spirit and we began the process of helping with the rescue. Staff eventually went to California to plead with LAAS to release the wolfdogs to a vet for immediate medical care before we offered them their permanent home. Thankfully, they were finally taken to the fantastic organization, Veterinary Angels Medical Center, and began receiving life-saving treatments.

Staff also went to the place where Nushmua’s puppies had been taken to offer them a home with us. It was a heartbreaking decision for the woman who was caring for them, since she had become extremely attached. She finally agreed it was best for two of them, Leia and Quinn, to come to Wild Spirit. The long trip home went well and all the rescues arrived safely. It’s possible that the moment they arrived at the sanctuary was the first time the adults had felt soil beneath their feet, and understandably, it took them a while to fully grasp how transformed their lives were. They were nervous and confused but seemed relieved to be free from the shelter and their previous abuse.

Tragically, Mitzi had suffered too much and died several days after being released into her new habitat. Shomo was very nervous and underweight for several weeks but finally began to settle and grow stronger with consistent, healthy meals. Her name was changed to Mystique to give her a truly fresh start. Kabbalah adjusted much faster to life at Wild Spirit and his two puppies, Leia and Quinn, very quickly began to thrive as well. The amount of time, money, and tireless fighting that went into this rescue is unfortunately very typical of this work. It is exhausting and can often seem hopeless, but when efforts pay off, the rewards are endless, especially for the animals in question. We are so grateful to Ms. Brooks, Ms. Krupa, Maureen Delaney of Delaney’s Dog, Veterinary Angels Medical Center, and everyone else who never gave up and donated their time and money to save the lives of these deserving rescues!