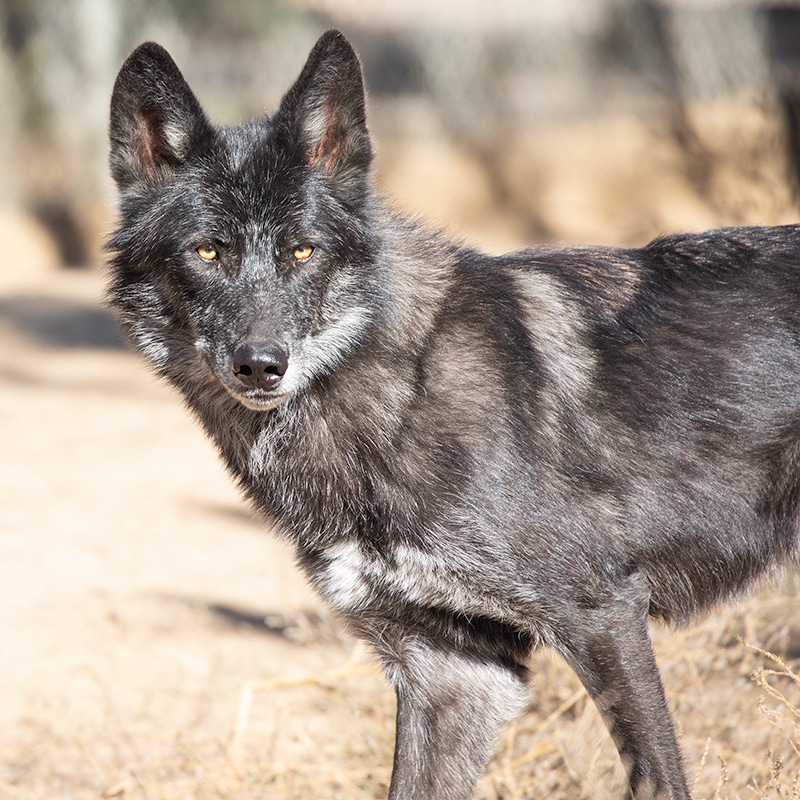 She is NOT on the Tour Path.
Over the years, Wild Spirit has been open in sharing that not all rescues come to us with histories of neglect or abuse. In fact, many of our animals received love beyond measure while sharing their lives with their owners; in return, these people often say their animals taught them things about themselves they’ll never be able to repay them for. Lessons about love, patience, sacrifice, work, and boundaries are often quoted among owners, and as Animal Caretakers here at Wild Spirit, we find ourselves relating heavily, as people who also share our lives with these incredible creatures.

Unfortunately, all the love in the world isn’t always enough to combat the harsh realities that life sometimes throws at us, forcing people to divert from their paths in ways they never imagined or anticipated. Of course, this isn’t a fact of life that’s unique to only wolfdogs, or to pets in general. The roller-coaster of life can impact pets, jobs, relationships, and even where we live. But when it comes to wolfdogs, we’ve found that it’s often owners like those mentioned above — those that seek to give all of themselves to their animals, and who understand and respect them for what they are — that seem to struggle the most with life changes the force them to give up their pets, but at the same time, are most ready to accept that doing so might be the most unselfish thing they could possibly do for the creatures they love so much.

The story below is no different.

Awilix is a mid-content wolfdog that was born in the southern part of the United States, where she was kept in horrendous conditions alongside her mother, father, and littermates. Fortunately, at around 7-weeks-old she found herself in a new world after being rescued by her owners and moving to Mexico.

After seeing the conditions Awilix was forced to live in on her breeder’s property, her new owners sought to ensure she would never experience such suffering again. Instead, they raised her in the comforts of their home, which they shared with several German shepherd rescues. Naturally, Awilix often preferred time spent outdoors, but never had any issues inside the house, which is often not the case for higher-content wolfdogs.

In addition, her owners worked to provide her with ample socialization, taking her to structured training classes, dog parks, and out for walks around their hometown. Slowly but surely, their patience and dedication paid off, and Awilix transformed from an under-socialized (and potentially traumatized) puppy, into a more confident version of herself, and with plenty of room left to grow.

However, when life threw her owner’s a curve-ball — one that involved a move from Mexico to a place in the United States in which wolfdog ownership is illegal — they found themselves heartbroken thinking about what their new path would mean for their girl, and wondering if maybe they had failed her…

In the end, they came to the realization that as much as they loved Awilix and had never anticipated being without her, this new path didn’t allow the option to keep her, and no amount of wishing could change that. So even though they couldn’t make Awilix fit into the future life had handed them, they could still do everything in their power to ensure that her future was one filled with the same love and care they had always provided her.

When Wild Spirit received an e-mail in October of 2022 explaining Awilix’s story, we were incredibly fortunate to have an open enclosure available, and a number of single male wolfdogs (all around her age) in need of a companion, so we immediately agreed to her intake. We were further blessed when her owners offered to bring her to the sanctuary, rather than having us go get her, allowing us to save time and funding, and providing them with the opportunity to see (and approve of) her new home. Naturally, we had to ask about the name they had chosen for her, and learned that it’s the name of the Mayan goddess of the moon, and queen of the night!

After a few days of decompression, Awilix was introduced to mid-content wolfdog, Zion, who now shares her enclosure. The two were an immediate match, and we’re confident that with time, she’ll come to trust her human Caretakers as much as she did her owners, especially with Zion by her side. And while we know that this process has been difficult for Awilix’s family, we’re honored to know they felt comfortable leaving their girl in our care, and know we’ll do everything in our power to provide nothing short of an exceptional life for her. 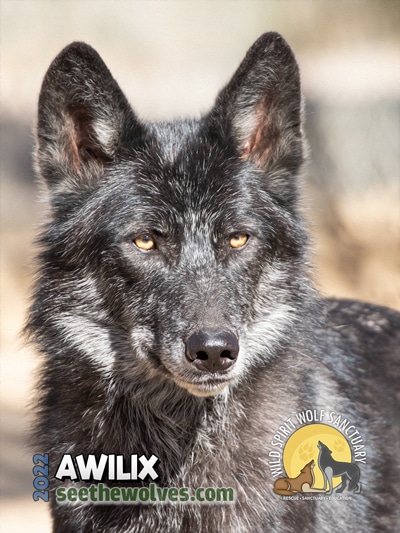 Awilix has only 3 sponsors!