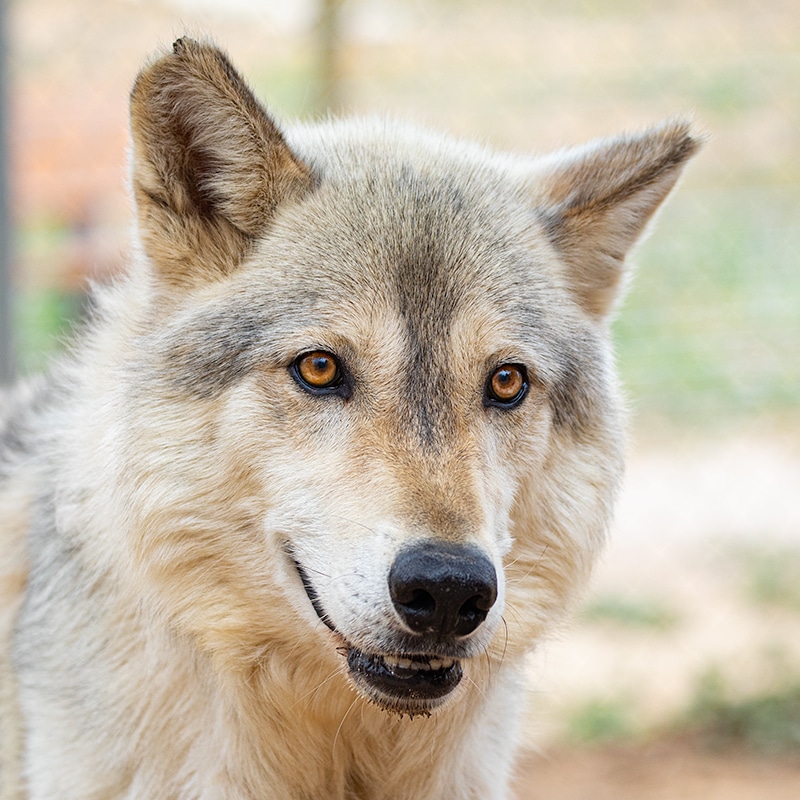 You can see him on the Tour Path!

In January of 2022, Wild Spirit’s Executive Director saw a post in an online Wolfdog Rescue Group that showcased a 2-year-old mid-content male looking for a new home after he was found wandering as a stray in Oklahoma.

In most states, when an animal is picked up as a stray and taken to a shelter, they are placed on something called a “stay-hold,” usually for up to 10 days to allow their owner to find and claim them. When an animal is unclaimed, they become the legal property of the shelter, who will then try to find them a new home (assuming they are suitable for adoption).

Sadly, Zion’s owners never came to claim him. In addition, because of the shelter’s policies on wolfdogs, they were not able to put him up for adoption and had a very short amount of time to find an outside rescue that would place him. Thankfully, another rescue did step up to pull him from the shelter, but soon ran into their own issues with him, prompting them to post him online for us to find!

Unfortunately, at the time that Zion’s story was posted, Wild Spirit didn’t have an empty enclosure to take him in. What we did have, however, was a fellow rescuer who happened to be located in Oklahoma – and who had assisted us in placing two other wolfdogs in the fall of 2021 – so we crossed our fingers and reached out to see if he had the space to take him. While he agreed to take Zion in, knowing the situation was growing urgent, he explained that he couldn’t commit to another permanent rescue, and asked that all parties continue to look for alternative placement. At the time, the rescue that originally pulled Zion from the shelter felt strongly about finding him an experienced owner, rather than placing him with a rescue or sanctuary. Uncertain of how feasible that option was, especially after hearing about some of Zion’s more difficult behaviors, Wild Spirit offered to place him if the time came, as long as we had an empty enclosure.

By March, we learned that Zion still hadn’t found his forever home, and though his foster was in no hurry to get rid of him, we knew his chances of finding a home were dwindling. So, as promised, Wild Spirit made the official offer to place him.

We hit the road in May of 2022 and made yet another trip from New Mexico to Oklahoma to retrieve Zion. Being a relatively social animal despite some of his alleged behavioral issues, he was placed on a leash and loaded into our rescue van without issue.

Before returning to the sanctuary, Zion joined us on a second stop in Texas, where we picked up 5-week-old high-content female wolfdog Artemis, who was donated to Wild Spirit by her breeder.

As a new rescue, Zion is currently living the single life while we allow him to settle in to his new home. Once we have a better understanding of his personality, we will begin to introduce him to some of our single females and hope one of them is the right fit for him! 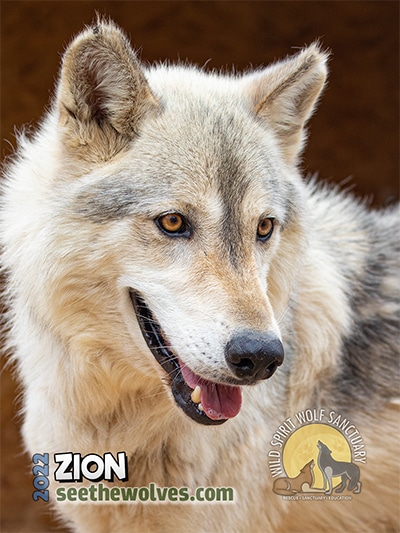 Zion has no sponsors!