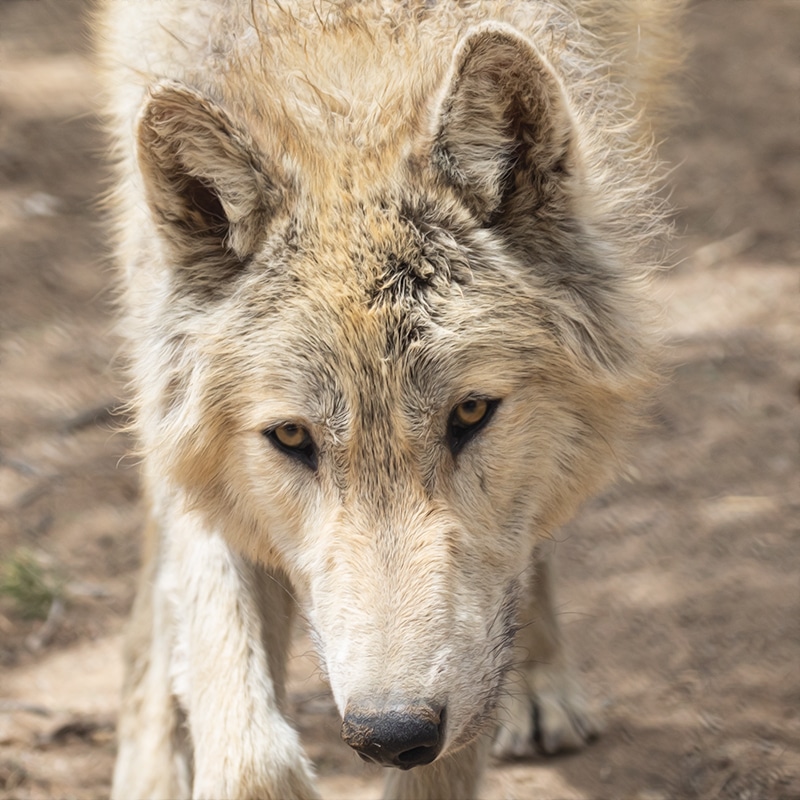 He is NOT on the Tour Path.
​In April of 2022, Wild Spirit was contacted by a private owner/breeder, and well-known member of the Wolfdog Community who was requesting assistance with one of his animals, a male high-content wolfdog named Aragorn.

To provide a bit of backstory, Aragorn was born in April of 2021, along with his five siblings. Unlike his littermates, Aragorn wasn’t sold to a new owner; instead, his breeder decided to keep him as one of his own, allowing him to remain with his mother and father and be hand-raised by his owner from just a few days old. (This is a common practice with wolfdogs, as it is believed to increase human and animal bonding during crucial socialization periods.)

For the first 3 months of his life, Aragorn lived primarily inside with his human family and their other pets, furthering his socialization and general comfort in what would otherwise be a strange and potentially scary environment. Unfortunately, one night his owner experienced a medical emergency that required immediate hospital care. In order to ensure Aragorn could see to his own needs while his owners were away (as it was uncertain how long they might be gone), they placed him outside into a large enclosure complete with food, water, and shelter.

Sadly, that same night a massive thunder storm hit, and Aragorn – who was used to living in the comforts of a home, surrounded by people who could give him lots of reassurance during uncertain situations – was completely traumatized by the storm. When his owners came back from the hospital, he was stressed, anxious, and afraid, and though his owners worked for months attempting to recover the sweet boy they had raised, he was never quite the same.

Knowing that his health would continue to be a concern for him and his animals, Aragorn’s owner made the incredibly difficult decision to contact us and ask if we had the space available to take his baby. Fortunately, we had just paired up two of our single rescues, providing us with a newly-empty enclosure with his name on it. Just a couple short weeks after our initial conversation with Aragorn’s owner, we hit the road for Arizona and went to go get him.

Since arriving, Aragorn was almost instantly paired up with his companion, an upper-mid content female named Beans who is just one year older than he is. The two are very similar in age, energy, and personality (though Beans is much more of a go-getter than Aragorn is), which has made them a fan-favorite of our team, as well as the guests that get to see them.

Thankfully, Aragorn has allowed many of our Animal Caretakers to give him love and affection, but the evidence of his general anxiety is plain to see, especially when it gets windy or rainy. We hope that in time, and with the help of his companion and human family, he will become more comfortable in his new environment.

We are honored to have him here with us, as we know what a difficult decision it was for his previous owner – who has known and loved him since birth- and we can’t wait to see who he decides to be as he continues to grow with us here at Wild Spirit. 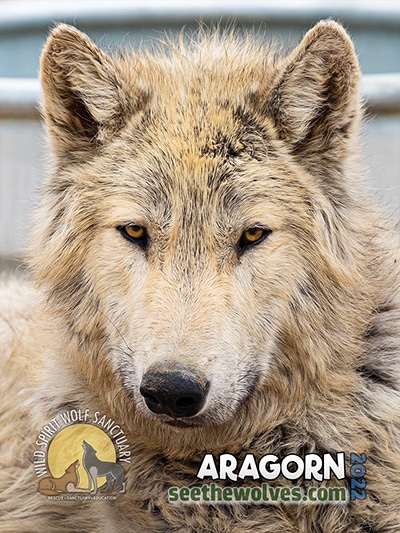 Aragorn has only 8 sponsors!