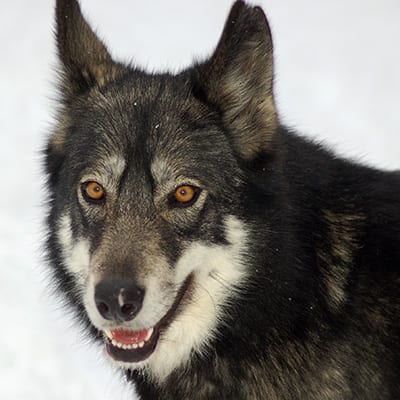 Juno is a domestic dog. She is 14 years old and her birthday is August 1st, 2007.
On Tour Path
Enrichment eligible 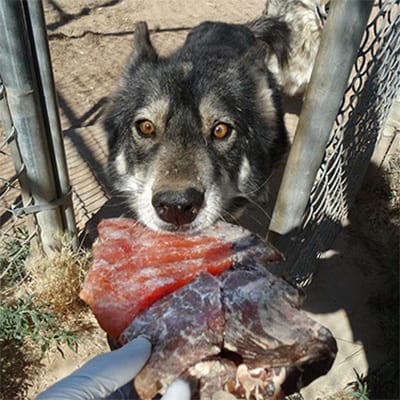 Juno is a spayed female domestic dog, most likely a malamute and German Shepherd mix. She was born in 2007 and mislabeled as a wolf-dog. 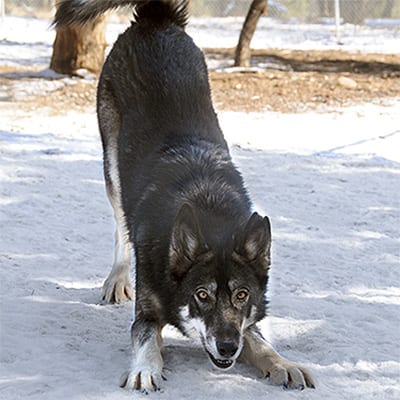 Juno is one of the shyer members of her family, but she gets braver each year. She will play-bow to caretakers and race around her habitat trying to get them to join the fun. When she gets to know her caretakers, she’ll come up to lick their hands and sometimes their faces.

Juno currently lives with her sister Azteca. The pair used to be a part of a larger group affectionately called our NOLA Pack, due to their rescue from New Orleans. Over the years their other 3 siblings have passed away but the girls still have each other for company and are often seen laying with each other.

Juno is the easiest to tell apart in her litter. Her coat is much darker than any of her siblings, she also has a nick in her ear. Juno was originally spelled “Juneau,” but it was shortened to “Juno” when she and her siblings arrived at Wild Spirit Wolf Sanctuary in 2009. 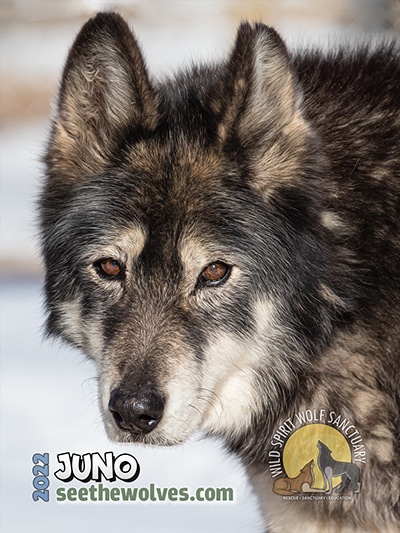 Juno has only 4 sponsors!

Juno loves to play. She also enjoys getting stuffed toys which she will carry around her enclosure to show off to her sister and their neighbors.

Juno does not like too much attention. She prefers only one or two people in her enclosure at a time and likes to approach on her own terms. 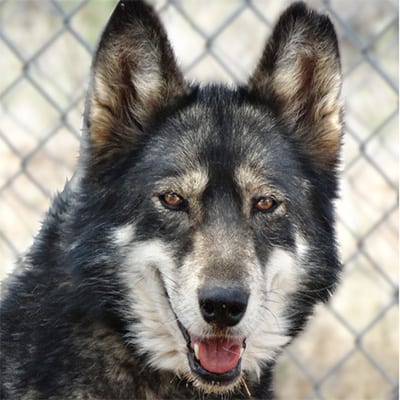 Beautiful Juno was one of five domestic dogs who was taken to a shelter in Louisiana when she was only 7-weeks-old. They were mistaken as wolf-dogs. Like many dogs sold as wolf-dogs, we think they are most likely a mix of malamute, German shepherd, and husky. Because they were labeled as wolf-dogs, it was almost impossible to adopt them out. Juno, her sisters Azteca, Goldie, and Katrina, and her brother, Saint, were all placed together in a 10 x 10-foot cage with a concrete floor and became completely unsocialized.

While at the shelter, someone would occasionally try to adopt one of the dogs, but they were always returned. The shelter called Wild Spirit in August of 2009. One of our staff members was on vacation in the area so she stopped by to see them. They were kept clean and fed but had spent two years together in that awful 10 x 10 cage, which caused permanent damage to their knees. They had learned to all move together as a pack in their tiny space. We couldn’t stand to see them spend the rest of their lives there. We made arrangements to accept them at Wild Spirit and they became our Nola Pack.

Despite still being shy, our Nolas are very sweet and loving dogs. For the sake of keeping the closely-knit family together, we decided against adopting them out. We have given them the best possible care, including knee surgeries for Saint, Azteca, Katrina and 14 weeks of physical therapy after each surgery. This precious family does a great job helping us educate folks on our tours. Their story is the perfect example of the fact that many of the canines sold as wolf-dogs are just domestic dogs. Incorrectly labeling a domestic dog as a wolf-dog, or even worse, a wolf, is a horrible disservice to both dogs and wolves. People get the impression that wolves and wolf-dogs are just like domestic dogs and will act accordingly. Sadly, most people who actually buy a wolf-dog or wolf very quickly realize they are not at all like domestic dogs. Sanctuary and rescue spaces are very limited. Most shelters will not adopt out wolf-dogs so they end up being euthanized. Juno and her family help us demonstrate how the wolf and wolf-dog breeding industry hurts everyone, even those who are not truly part of it.