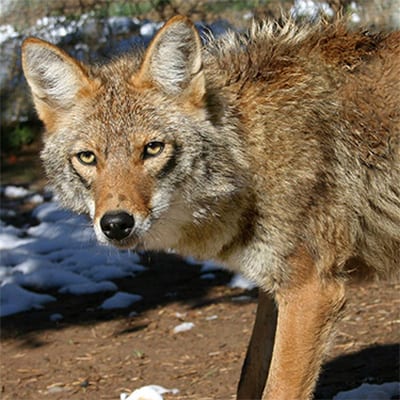 Maine is a coyote. He is 4 years old and his birthday is April 1st, 2016.
NOT on the Tour Path
Enrichment eligible 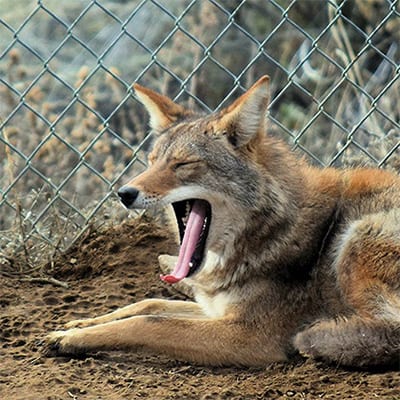 Maine is a neutered male coyote. We welcomed him in January of 2017 when he was 10 months old. 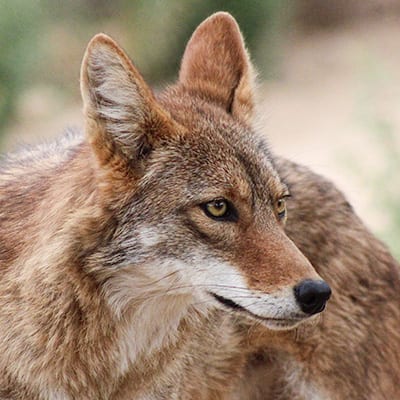 Maine is a quiet guy. He enjoys running around with his companion, Yuni, but he’s very content to lie in the back of his enclosure in the sun, just taking it easy. He’s comfortable around people, but he isn’t interested in getting pets or interacting too closely.

Maine lives with a spayed female coyote named Yuni. They were separated for a time after she began bullying him. Their habitats shared a fenceline, and Yuni began acting like she wanted to be reunited. They went on several “dates” during Yuni’s enrichment walks and it was clear they wanted to give their friendship another try. This adorable pair is on our tour path, so you can stop by and say “hi” when you come to visit.

When Maine first arrived at Wild Spirit, he was rocking a crazy hair-do! His previous owner had partly shaved him in an effort to get rid of fleas, leaving a big poof of fur right above his tail! Fortunately, the fleas were easily treated with topical medication, but he looked pretty funny with his patchy coat. 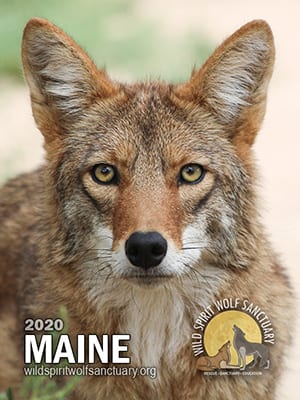 Maine has only 5 sponsors!

Maine is a simple guy who enjoys simple pleasures! He likes treats, lying in the sun, and splashing in his tub. He likes playing with Yuni, but she usually has to pester him to get him up and moving.

Maine isn’t a big fan of large tours or a lot of activity happening around his habitat. Fortunately, he’s learned he can stay out of sight behind his cave house. 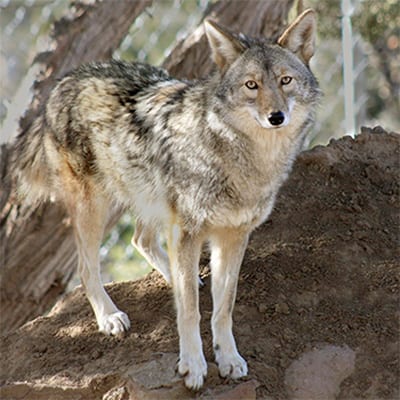 We were told that our sweet and handsome Maine was initially purchased to be a pet. We’re not sure how he ended up with the seller in the first place, and it’s possible that he was stolen as a newborn from a coyote den. Like many wild animals that people try to make pets, Maine soon proved to be too wild for his owner. After a few short months, his owner realized he “couldn’t handle him.” He brought baby Maine to an animal rescuer, telling her that her that if she didn’t take him, he’d be shot.

Unfortunately, Maine’s story is not unique and many coyotes do not get a happy ending. Thousands of baby coyotes are den-robbed each year or trapped, and others are bred in captivity. Some are sold as pets, others are killed and skinned for their fur, and the most unlucky are used as live bait for training hunting dogs. The poor coyote is tethered so it can’t escape and hunting dogs are taught to tear it apart. The sad reality is that coyotes are often wrongly considered as vermin or thought to be dangerous, aggressive animals that will harm pets and even children. Despite the fact that these ideas are typically not true, coyotes are widely hunted, mistreated, and demonized in the United States. There are even coyote-killing contests in place, organized as fundraisers, in which the winner is the person who manages to kill the largest number of coyotes.

When the first owner dropped Maine off with the rescuer, the little coyote had been incompletely shaved. The man said he had done this because Maine had fleas and thought that would get rid of them. Thankfully, the rescuer took great care of Maine. She took him to the vet, had him vaccinated and treated for fleas, and fed him a healthy diet. Although she cared deeply for Maine, she was about to have her first baby and she knew Maine would need special care that she could no longer provide. She also knew that he could never be adopted into a home like a domestic dog.

Maine’s rescuer contacted Wild Spirit and told us all about this deserving boy. We already had a single female coyote named Yuni who was in need of a friend and rescuing Maine seemed like a great opportunity for her as well as him. By bringing him to Wild Spirit, we could provide him lifetime sanctuary and also enrich his and Yuni’s lives with companionship of their own kind. Maine was nervous on his way to WSWS, and it took him some time to settle into his new home. Fortunately, he and Yuni get along very well together, and with her help, he has settled into a comfortable, happy life at Wild Spirit Wolf Sanctuary.