What Wolves Can Teach Us About Leadership & Teamwork 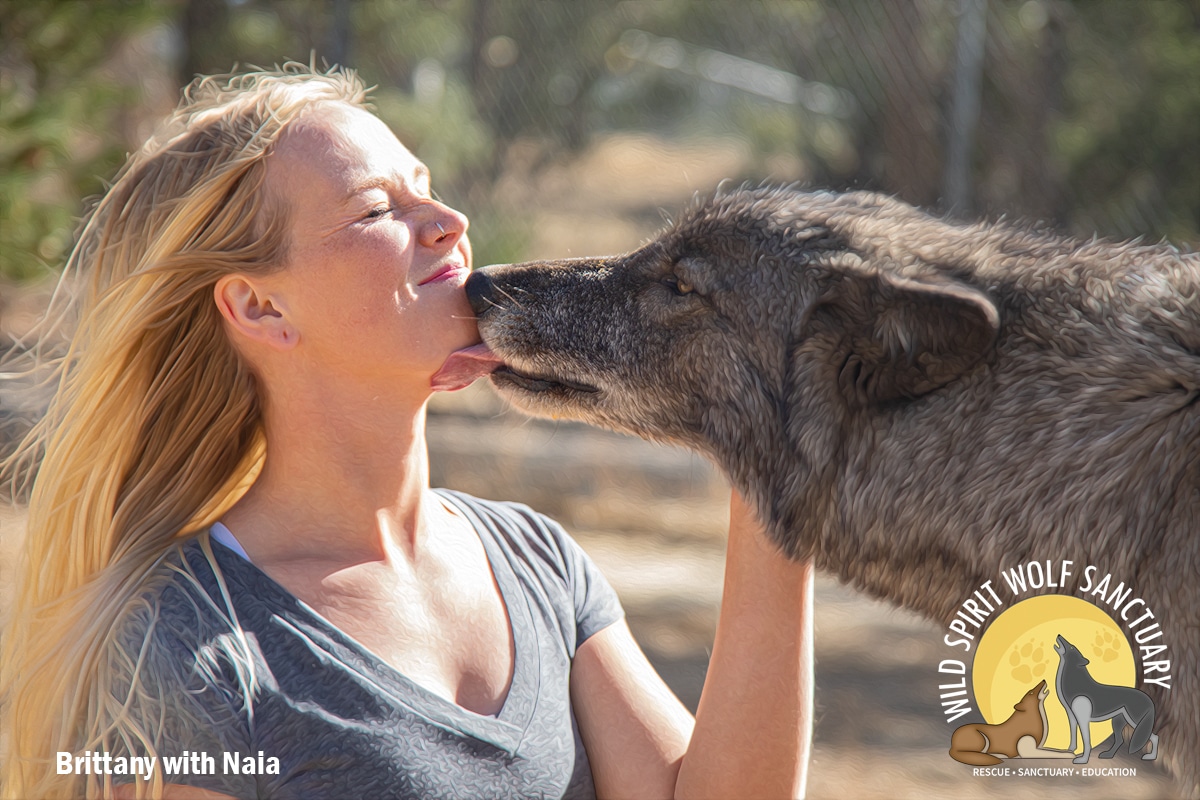 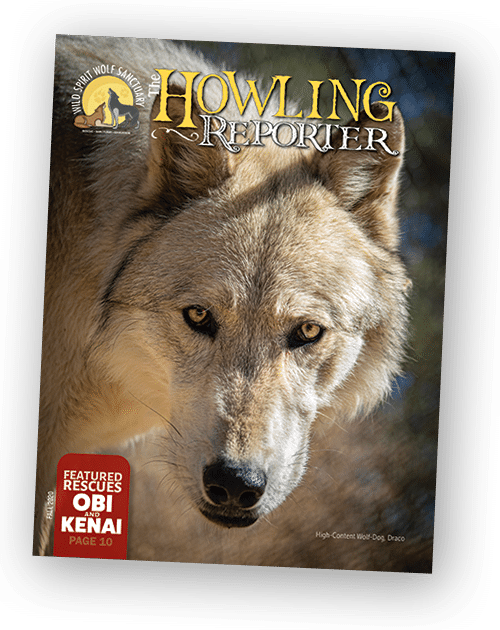 This article was featured in the fall issue of The Howling Reporter that was published the first week of November in 2020. The Howling Reporter is a quarterly publication from the Wild Spirit Wolf Sanctuary team featuring stories, articles, photos, and more. You can receive The Howling Reporter by purchasing a Membership, sponsoring a rescue, or donating $50 or more to help with our very important mission!

Even before I arrived at Wild Spirit Wolf Sanctuary to take on my new role as the Executive Director, I found myself reflecting back on the years with a deep sense of gratitude: for every moment that led me to this place; every position that helped shape me into the confident leader that I am; every encounter that taught me the value of my teams; and most importantly, for every animal that put each of those lessons into perspective for me. And let me tell you, when it comes to lessons in leadership and team building, the wolf is the ultimate teacher.

Here are a few of the things they’ve taught me over the years:

The Strength of the Wolf is the Pack 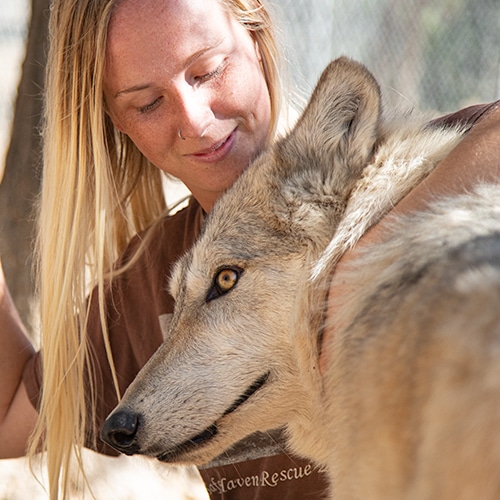 The life of a wild wolf is far from easy. Every day is a constant struggle for survival as these animals work to patrol miles of territory, take down large and dangerous prey, face harsh elements, and battle the constant threat of illness, injury, and disease. While it is possible for a lone wolf to navigate these challenges successfully, the odds of survival are drastically increased for wolves living in a pack and working as a team. In addition, packs operate in a manner that requires each member to contribute equally toward the group’s shared responsibilities This manner of cooperative living works to alleviate the pressures on not only the pack leaders, but on every member of the family. Ultimately, wolves understand that the pack’s survival relies on teamwork, and that working together yields the greatest potential for success.

When it comes to humans, these same concepts hold true. We can always accomplish more working as a team than we can working independently, but in order to truly thrive teams must learn to work cohesively. As with wolves in a pack, it is not merely the group leaders that are responsible for the success of the team. Instead, each member must be expected and allowed to contribute equally, and encouraged to utilize their individual strengths to best benefit the team.

The Only Option is to Persevere 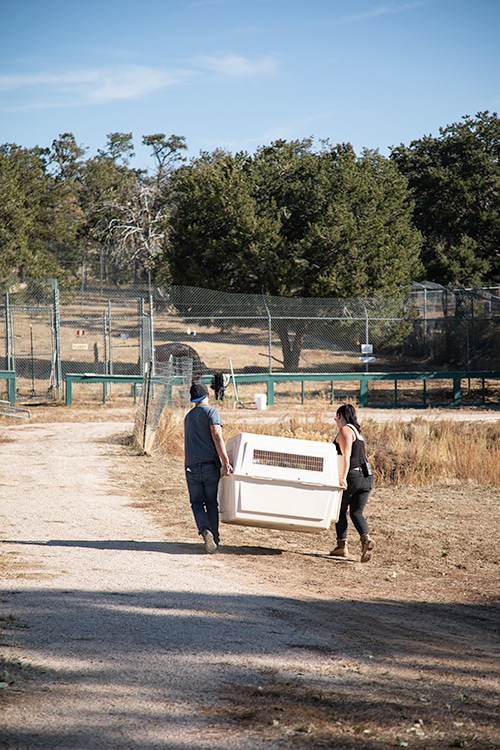 Jared and Megan Carry Flurry Back to his Habitat

Despite the fact that wolf packs are much more equipped for survival than wolves living on their own, success is never guaranteed. In fact, when it comes to hunting, wolf packs fail in making a kill far more often than they succeed. On average, wolves land themselves a meal approximately one out of every ten hunts. Imagine, for a second, how a human might feel in a similar situation, having put hours of time and effort into a group activity that ultimately resulted in failure. I expect that a lot of negative emotions come up just thinking about it—anger, disappointment, blame. Wolves, however, have no use for these feelings. Placing blame won’t result in a meal. Instead, they analyze the group’s mistakes in order to learn from them, adding to the pack’s collective wisdom over time, and in doing so, increasing their chances of success in the future.

Unlike wolves, humans are often quick to place blame onto others rather than accepting a collective responsibility for the group’s shortcomings or failures. I’ve learned that these practices will only serve to weaken a team, but if we can learn to see mistakes as opportunities for learning it becomes far easier to discuss ideas for improvement openly and constructively. Mistakes will always be made; we’re only human, after all. But if teams can learn to embody the determination of the wolf, whose only chance of survival relies on the ability to get back up after every failure, they can overcome any obstacle that stands in their way.

Wolves rely on a wide array of vocalizations, facial expressions, and body postures to clearly communicate boundaries, warnings, appeasement, and even the desire to play. They are incredibly direct when it comes to expressing their wants and needs and will generally do so in a way that leaves little room for misunderstanding. This straightforward approach to communication is crucial for setting rules, social bonding, sharing critical information, and preventing conflict within the group. In addition, wolves on the receiving end of a message are generally respectful of what the other is conveying—a task made easier when they’re able to understand them clearly.

Just last week, one of our Animal Caregivers and I were discussing how humans seem to have an incredibly difficult time dealing with conflict, especially in the workplace, and she shared a thought that really resonated with me. She said, “When wolves get into a confrontation with one another, it’s big, it’s loud, and it’s immediate, but then it’s over. Wolves don’t hold grudges or nurture hurt feelings. 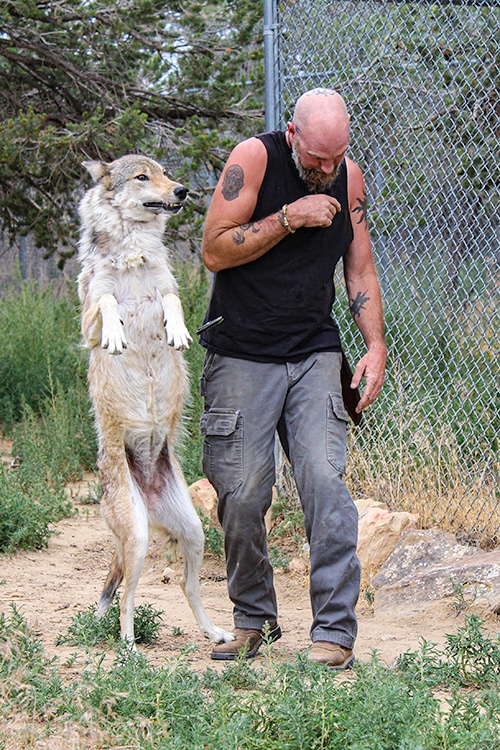 They address the issue and move on. If we could learn to react to controversy like wolves do, it would be a whole lot easier to walk away from uncomfortable conversations with a sense of calm and resolution, and with fewer hurt feelings.”

Finally, I’ve found that when it comes to team building, wolves do a tremendous job of showcasing the numerous benefits of a healthy work-life balance, especially when bolstered by play. Wolves use play as a means of having fun, fine-tuning their communication skills, learning how to trust and rely on one another, and ultimately, to further strengthen their bond as a family.

Through engaging in play-based group activities (both in and out of the work place), we can also experience growth within these areas, and in doing so strengthen as a team. In time, this will lead to higher achievement, greater productivity, and increased commitment to organization. I’m so proud to say that this is certainly true for the team at the sanctuary! Each member of our Human Pack is certainly unique, and we each bring our own strengths to the table. More than anything, we know how to work hard, play hard, and have made it our mission to nurture a culture that values the same qualities that our wolves do—patience, respect, love, and support.