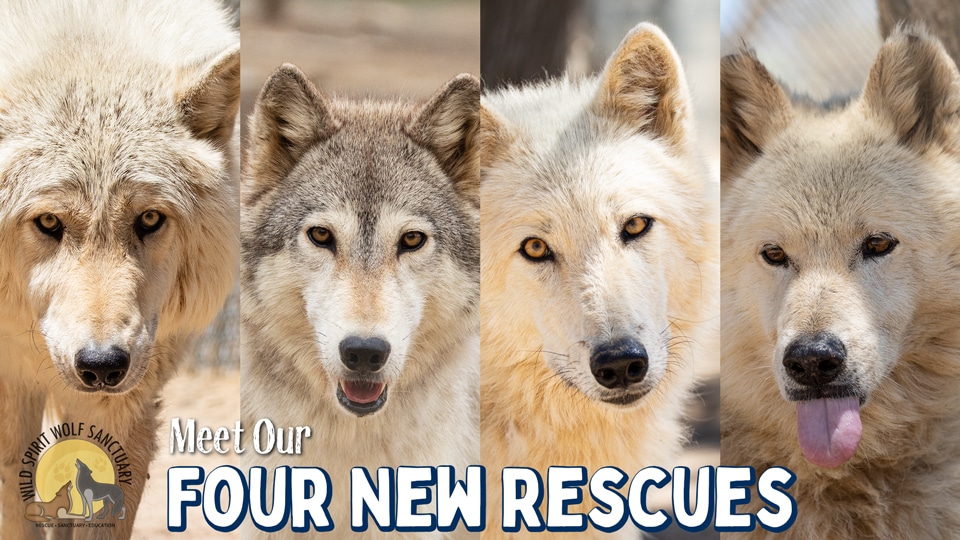 The months of April and May have been filled with non-stop activity for the Wild Spirit Team, with each day bringing something new and exciting to the table. Between daily habitat upgrades and the reconstruction of our tour path in preparation of our 2021 Grand Re-opening, we’ve certainly been staying busy! More exciting than any of that, however, was the arrival of not one, not two, but four new rescues! We hope you will join us in welcoming them to the Wild Spirit “pack” as they all settle in. 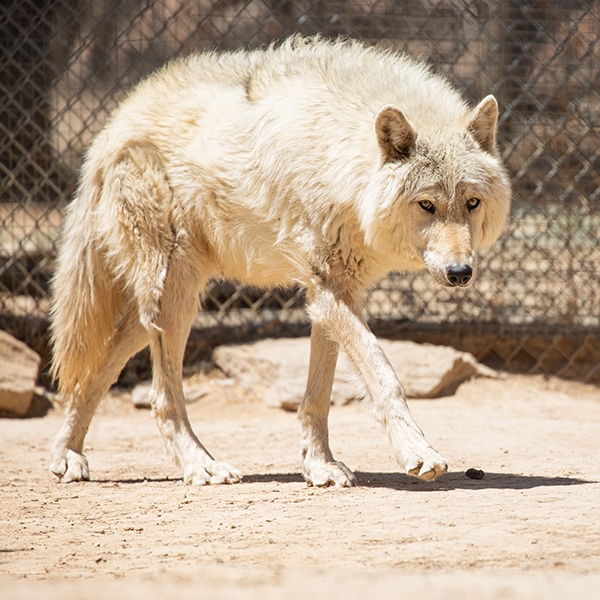 In April of 2021, we received an intake request for 3-year-old high-content wolfdog, Mowgli, who was living as a privately owned pet on a cattle farm in northern Colorado. Like many of our more recent rescues, Mowgli was loved and well cared for by his owners, but unfortunately, as he entered into sexual maturity his behaviors began to shift dramatically. For example, he became increasingly unpredictable, sensitive to certain types of touch, and altogether difficult to interact with safely. In addition, he killed another family pet that lived in the enclosure next to him, which solidified his owners’ decision to seek out sanctuary placement.

Wild Spirit reached out with the offer to take Mowgli in immediately, confident that we could offer him a safe and secure forever home where we are fully equipped to manage even the most intense canine behaviors. His owners agreed to place him with us and just days later, staff loaded up the rescue van and made the trip to Colorado to retrieve him. Thankfully, Mowgli’s owners handled every aspect of getting him loaded into the van, making the experience as stress-free as possible on him and the members of our team.

Since arriving at the sanctuary, Mowgli has been a bit uncertain about his new surroundings, especially in regards to our Animal Caretakers. For example, he cries for attention frequently, but is extremely picky about who he receives it from, and he hasn’t quite figured out how to engage with people appropriately yet, often pressing up against the fence for pets, then growling when someone approaches. Thankfully, he does enjoy affection from Executive Director, Brittany, which has made caring for him a little bit easier. Best of all, because he will allow Brittany to pet him inside or outside of the enclosure, she was able to remove his collar despite his extreme touch-sensitivity, and hand-sedate him for his first vet visit. While under sedation, Mowgli received a full physical exam, routine bloodwork and vaccinations, a dental exam, and a neuter, which we hope will help to alleviate some of his more intense behaviors.

While Mowgli is currently on the mend following his surgery, he has been living next door to high-content female wolfdog, Agana, who we hope to pair him with very soon! The two have frequently been seen running the fence and napping next to one another, and the team is so excited for their first meeting to take place! Be sure to keep your eyes out on our social media pages for future updates! 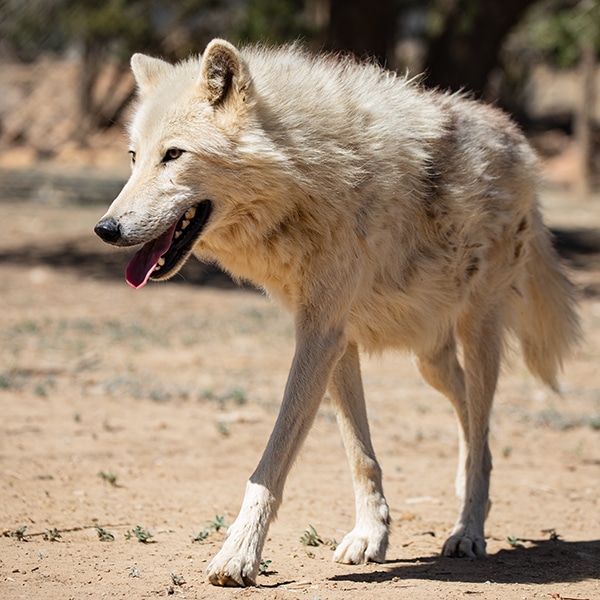 Specifically, the pair’s owner reached out about the need to re-home Sarkhan, explaining that in the last several months he had begun to demonstrate a number of significant behavioral changes that were quite concerning. Despite the fact that he was raised with an incredible amount of love and socialization, his owner explained that upon reaching sexual maturity, Sarkhan had become increasingly aggressive toward her and her husband, acting out with such intensity that it became impossible for them to care for him, or Katniss, safely. Before deciding to give him up, the couple racked their brains trying to figure out what might be triggering his behaviors and went to great lengths attempting to trouble-shoot and resolve the issues; unfortunately, after months of trial and error, nothing seemed to work, so they made the difficult decision to re-home him to Wild Spirit.

In addition, because Sarkhan was so bonded to Katniss, the couple asked if we would take her as well, allowing them to remain together for life. Naturally, we agreed and in May of 2021, we made the trip from New Mexico to Alabama to pick them up and bring them home.

Upon arrival at the couple’s home, we were introduced to the pair, who demonstrated very different comfort levels around people. Sarkhan, for example, was very confident in our presence, but immediately began to display the aggressive behaviors we were warned about, approaching the fence line with hackles raised and snarling loudly. Katniss, on the other hand, seemed shy but curious, electing to keep a healthy distance from the strange members of our team. 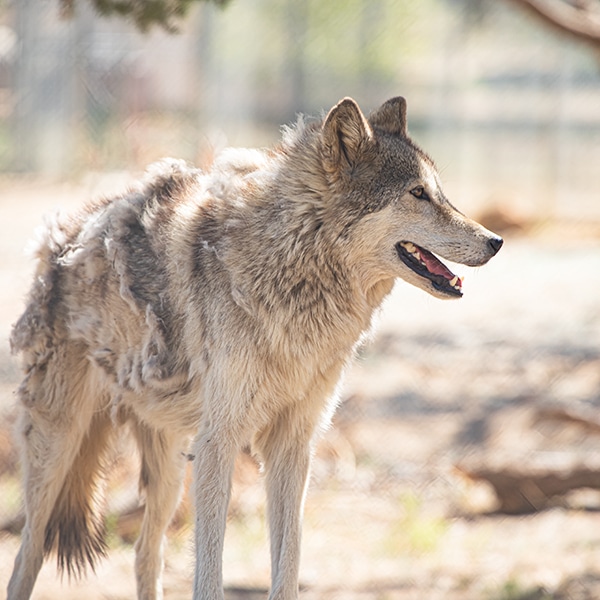 Knowing that Sarkhan was so aggressive, we arrived in Alabama with a plan in place — one that involved utilizing our dart gun to safely sedate him prior to entering into his space. Thankfully, because he was so confident around humans, darting him was a breeze, and within moments we were able to enter the enclosure to place him into a crate and reverse him from the sedatives. Katniss, on the other hand, would not stand still long enough for us to dart her safely, but was quickly caught up without issue, reunited with Sarkhan just moments later. Once both animals were contained, we began our journey back to the sanctuary, where the pair was placed into a massive enclosure and immediately went to greet their new neighbors!

Since arriving at Wild Spirit, Sarkhan has demonstrated a personality that changes from day to day, ranging from sweet and submissive to outright aggressive displays. Because he’s brand new and still settling in, it’s hard for us to know at this point who Sarkhan truly is. Thankfully, we are fully prepared for whatever sides of him continue to shine through, and to offer him the best life possible no matter who he chooses to be. And while both Sarkhan and Katniss are quite new, we feel confident that they will quickly begin to adjust to their new home and the various members of our team. We are so grateful to know that they will have a place to call home for the rest of their lives, and that they can do so as a lifelong pair!

In the coming months, both Sarkhan and Katniss will meet with Wild Spirit’s amazing veterinary partner to have full work-ups completed. In addition, Sarkhan will undergo a neuter surgery, which we hope will help to address some of his less-desirable behaviors. Thankfully, companion Katniss is already spayed, so there is no rush for Sarkhan to be seen, which will allow him to settle in more fully and, ideally, be sedated by hand, rather than darting. 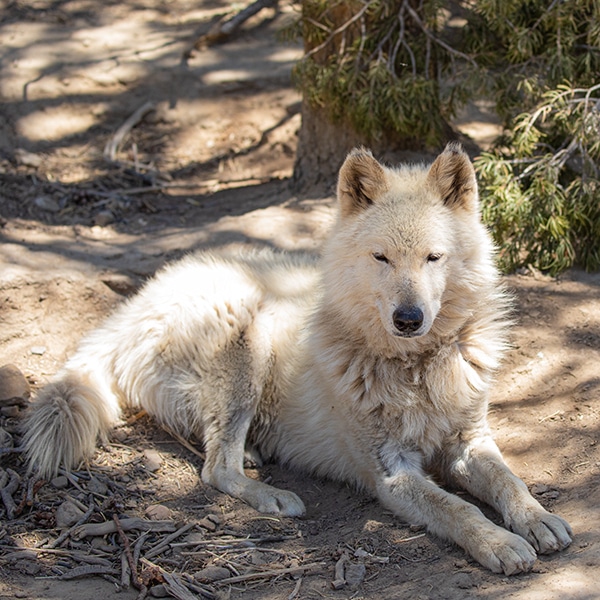 Last but not least is 9-year-old low-content wolfdog, Kirito, who was previously owned as a pet in North Carolina. Sadly, Kirito has been owned by a number of different people and re-homed several times. According to the person we got him from, he was severely neglected in his first home, which prompted her to take him. Thankfully, his second owner was much more willing to give him the love and care that he needed, even going so far as to begin treating his heartworms — a condition that he likely had for years in his previous home — and raising the funds needed to provide the best care that she could for him. Sadly, despite all of his new owner’s efforts, Kirito was still a handful, demonstrating a number of undesirable behaviors that made him a complicated pet to house, especially with her other animals. As such, she made the difficult decision to re-home him and posted him online in a group that specializes in the placement of wolfdogs, where our Executive Director saw him listed and reached out for more information.

Upon speaking with Kirito’s owner, we gained a full description of his personality, behaviors, and medical needs (specifically, that he is heartworm positive), and determined that despite the fact that he is a low-content wolfdog and social with people, he would be extremely difficult to find placement for, all things considered. As such, we agreed to take him in, knowing we could give him the love and care he needs for the rest of his days.

Fortunately, the Wild Spirit team was already planning a separate rescue trip to Alabama, and Kirito’s owner graciously agreed to transport him there to meet us, shaving over 12 total hours from the trip! Even better, Kirito was amazing for the entire ride back home, despite having two strange wolfdogs sharing the space (in crates, of course!). Upon arrival at the sanctuary, he was placed into a massive enclosure where he quickly greeted his next-door neighbors and said hello to each member of our human team!

In the weeks following his arrival, Kirito has quickly become a staff favorite! Not only is he sweet and loving to most members of our team, he is so tiny that it’s hard to resist falling in love with his cute little face! In addition, Kirito is great on leash, so he has been able to take walks around the compound and get his own “tour” of the sanctuary. Best of all, he was recently moved into an enclosure next to mid-content wolfdog, Yue, who we think might be the perfect match for him!

At this point in time, Wild Spirit is officially at max capacity in regards to our rescues, and we are so grateful to know that because of the love and support of people like you, we have the resources available to provide lifelong care for close to 60 incredible rescues! We hope you’ve enjoyed reading about your newest intakes, and encourage you to check out our website and social media for more information. As always, should you find yourself falling head over heels for the newest members of our Wild Spirit family, please consider an annual sponsorship. The funds raised from sponsorships help us cover the costs associated with rescuing and caring for these amazing creatures, and allows us to provide them with the best lives possible.

From the Wild Spirit Family, Happy New Year to all of you amazing supporters and fellow admirers of our wild-spirited...