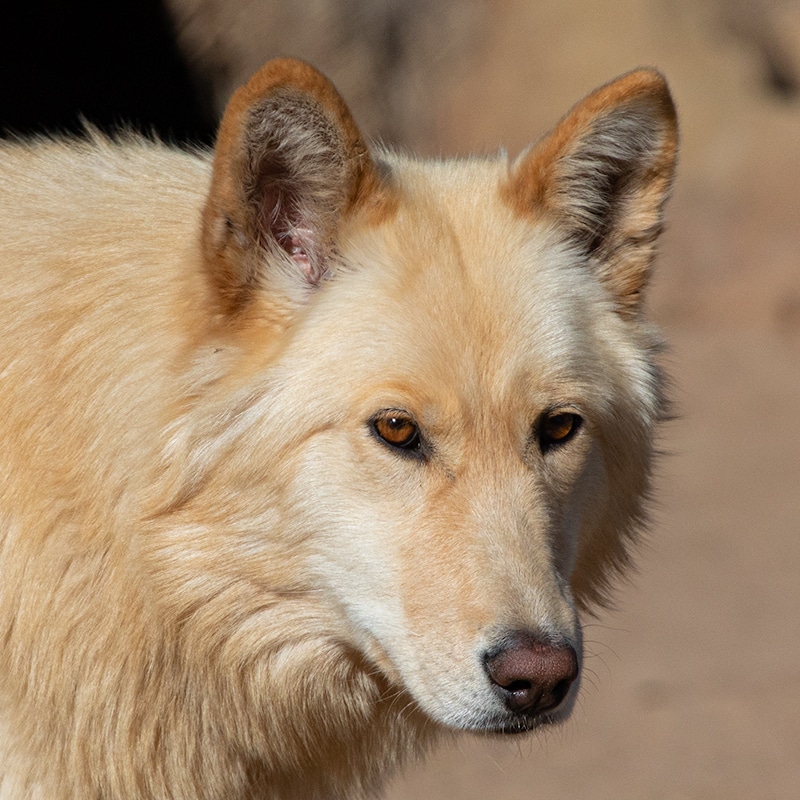 She is roughly 4 years old and her birthday is around January, 2019.

You can see her on the Tour Path!
In April of 2022, Wild Spirit was contacted by a young woman who was living her dream life in Alaska, surrounded by 14 beautiful and hard-working sled dogs! One of these canines was a magnificent golden girl named Honey, who she had rescued as a pup and raised as part of her team. But as Honey got older, her owner began to notice some physical and behavioral traits that she had never experienced in her other northern breed mixes. So, at the recommendation of her sled-dog friends she decided to run an Embark DNA test to see if Honey might have some off-standard breeds contributing to these differences.

After about 3-4 weeks of waiting, Honey’s results arrived, confirming her owner’s suspicions that she was not a regular northern breed mix, but rather, a low-content wolfdog with approximately 37% grey wolf in her DNA.

Sadly, throughout the entire state of Alaska, wolfdogs are illegal to own as pets, regardless of their content. This meant that even though Honey hadn’t been purchased knowing she was a wolfdog, and was incredibly well-loved by an owner who gave her life so much purpose, she could not remain in the state… As a result, her owner began to search for a sanctuary that could provide Honey with a new forever home.

When we were initially contacted about Honey’s situation, we were more than willing to offer her a home with us, but advised her owner that we didn’t have any open enclosures at the moment. Thankfully, after learning that a sanctuary had agreed to take Honey, but needed some time to accommodate her, Alaska state officials provided an immense amount of flexibility regarding the timeline for placement.

And so it was that 6 months later, a space had finally opened up for this stunning little girl, who was transported all the way from Alaska to New Mexico by plane, allowing her owner to escort her all the way to the sanctuary, where she helped get her settled into her new home. Because we already have a rescue named Honey, our new pack member was renamed Thistle (which she and the entire team are all working to get used to).

While Thistle was previously owned as a pet and shared her life with humans and canines alike, she was always known to be a bit shy around anyone but her owner, and we’ve certainly seen that side of her more often than anything as she continues settling in. However, knowing she was once part of a massive pack, we made plans to begin introducing her to one of our single male wolfdogs as soon as we felt she was ready. After about a week of decompression time, Thistle had her first play-date with Antoine, a mid-content wolfdog who is social and confident beyond measure. The reason Antoine was selected was because we hoped that his social nature would help Thistle feel more comfortable and secure in her new home, and sure enough, it worked! After a few more play-dates, the pair are living together happily, and Thistle, while still shy, is definitely warming up to her new life. 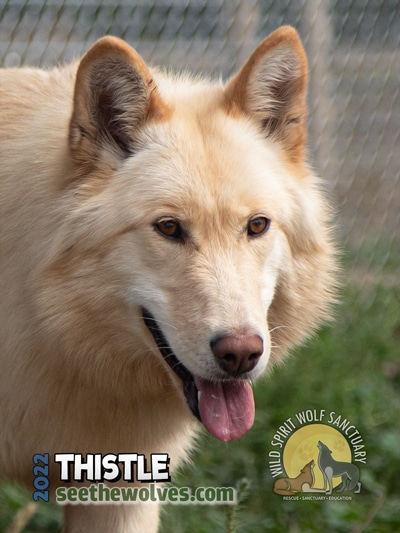 Thistle has only 5 sponsors!