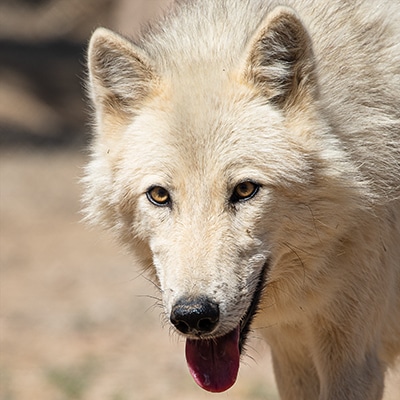 Sarkhan is a high-content wolfdog. He is 2 years old and his birthday is April 9th, 2019.
On Tour Path
Enrichment eligible

Sarkhan lives with an upper-mid-content female wolfdog named Katniss, who was also his companion in their previous home!

Sarkhan was named after a character in the popular fantasy card game, “Magic: The Gathering.”

We are still getting to know more about Sarkhan and his quirks. Right now he seems to enjoy saying hello to his new neighbors, Draco and Leia on one side, and Quinn and Lyca on the other.

On certain days, Sarkhan does not like various members of our team, and seems to show a preference for men over women. 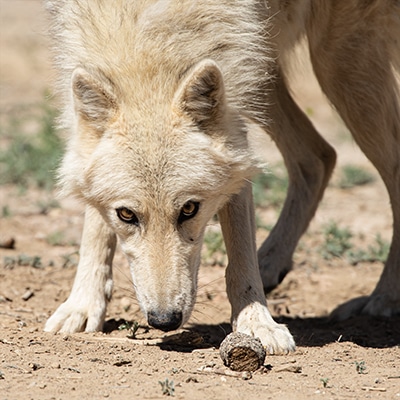 Sarkhan arrived with companion, Katniss, in May, 2021 from their home in Alabama. Both Sarkhan and Katniss appeared unusually comfortable on their first day in their new home, playing with their neighbors along the fence, and greeting humans that walked by. Most rescues are much more shy and nervous in their first days with us.

Sarkhan has only 6 sponsors! 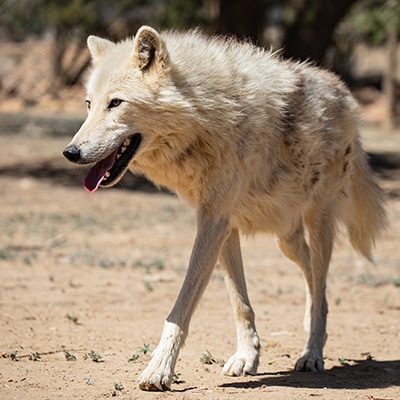 Even before arriving at Wild Spirit, Sarkhan’s personality has been mercurial. Previously owned as a private pet by a very experienced couple, he was raised with lots of love and socialization and for the first year and a half of his life, he was a total sweetheart! However, there came a day when Sarkhan was no longer displaying consistently friendly behaviors toward his owners, instead acting quite aggressively for no apparent reason. The couple racked their brains trying to figure out what might be triggering the change and went to great lengths attempting to trouble-shoot and resolve the issues; unfortunately, after months of trial and error, nothing seemed to work, so they made the difficult decision to re-home him to Wild Spirit.

Even now, Sarkhan has demonstrated a personality that changes from day to day, ranging from sweet and submissive to outright aggressive displays. Because he’s brand new and still settling into life at the sanctuary, it’s hard for us to know at this point who Sarkhan truly is. Thankfully, we are fully prepared for whatever sides of him continue to shine through, and to offer him the best life possible no matter who he chooses to be. 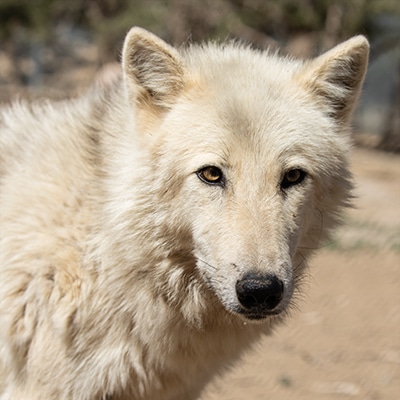 In the spring of 2021, Wild Spirit was contacted by Sarkhan’s owner about the need to re-home him, explaining that in the last several months he had begun to demonstrate a number of significant behavioral changes that were quite concerning. Despite the fact that he was raised with an incredible amount of love and socialization, she explained that upon reaching sexual maturity, Sarkhan had become increasingly aggressive toward her and her husband, acting out with such intensity that it became impossible for them to care for him, or his companion, Katniss, safely. Before deciding to give him up, the couple racked their brains trying to figure out what might be triggering his behaviors and went to great lengths attempting to trouble-shoot and resolve the issues; unfortunately, after months of trial and error, nothing seemed to work, so they made the difficult decision to re-home him to Wild Spirit.

In addition, because Sarkhan was so bonded to his companion, the couple asked if we would take her as well, allowing them to remain together for life. Naturally, we agreed and in May of 2021, we made the trip from New Mexico to Alabama to pick them up and bring them home.

Upon arrival at the couple’s home, we were introduced to Sarkhan and Katniss, who demonstrated very different comfort levels around people. Sarkhan, for example, was very confident in our presence, but immediately began to display the aggressive behaviors we were warned about, approaching the fence line with hackles raised and snarling loudly. Katniss, on the other hand, seemed shy but curious, electing to keep a healthy distance from the new strangers.

Knowing that Sarkhan was so aggressive, we arrived in Alabama with a plan in place — one that involved utilizing our dart gun to safely sedate him prior to entering into his space. Thankfully, because he was so confident around humans, darting him was a breeze, and within moments we were able to enter into this enclosure to place him into a crate and reverse him from the sedatives. Katniss, on the other hand, would not stand still long enough for us to dart her safely, but was quickly caught up without issue, reunited with Sarkhan just moments later.

Once both animals were contained, we began our journey back to the sanctuary, where the pair was placed into a massive enclosure where they immediately went to greet their new neighbors! While both Sarkhan and Katniss are quite new, we feel confident that they will quickly begin to adjust to their new home and the various members of our team. We are so grateful to know that they will have a place to call home for the rest of their lives, and that they can do so together!