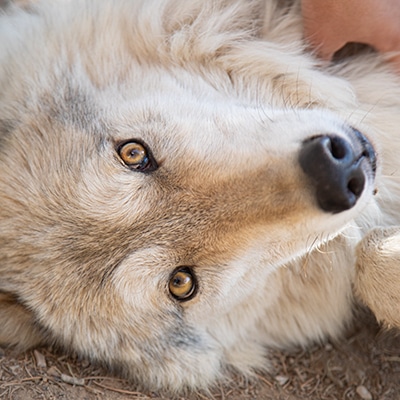 Irwin is a high-content wolfdog. He is 8 years old and his birthday is April 15th, 2014.
On Tour Path
Enrichment eligible 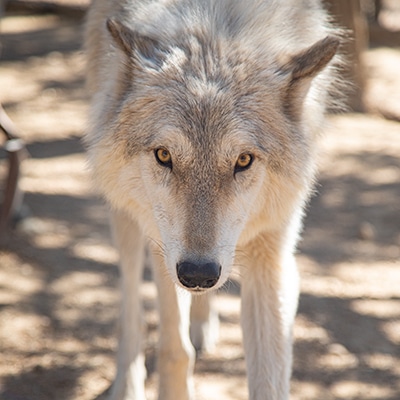 Irwin is a neutered male high-content wolf-dog. That means he looks and acts like a wolf but has some dog in his history. We rescued him in October, 2020, when he was 6 years-old. Irwin is a sweet and social boy who is comfortable around people, but not always the most confident. Though he generally loves social interactions with his Caretakers, Irwin struggles with knowing how best to communicate his boundaries. As a result, his behaviors can go from calm to unpredictable rather quickly, so working with him requires in-depth understanding of canine body language and behavior.

Outside of his relationship with humans, Irwin absolutely adores his companion Naia, and the two spend a great deal of time running around their enclosure playing with one another, as well as their neighbors to either side.

Irwin spent the first 6 years of his life living with a black lab named Elsa, who helped care for him as a pup. He now lives with spayed high-content wolfdog, Naia.

Facts: Prior to life at Wild Spirit, Irwin’s name was “Wolfie”, but upon his resuce the team decided on Irwin, naming him after the famous “Crocodile Hunter,” Steve Irwin, in honor of his new life and home. 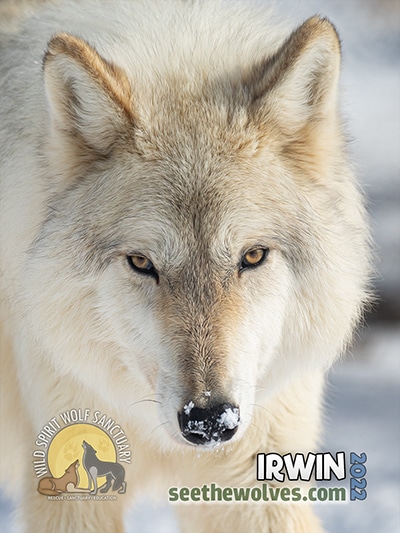 Irwin has only 5 sponsors!

There’s nothing Irwin loves more than Executive Director, Brittany. Since the day he arrived he has been stuck to her like glue, especially during introductions to members of the team, where he will lean against Brittany’s legs and literally look to her for reassurance. Irwin is also a huge fan of belly rubs and has been known to lie on his back for long periods, languishing in the pampered treatment.

Irwin dislikes certain men and will alarm howl whenever they are near. 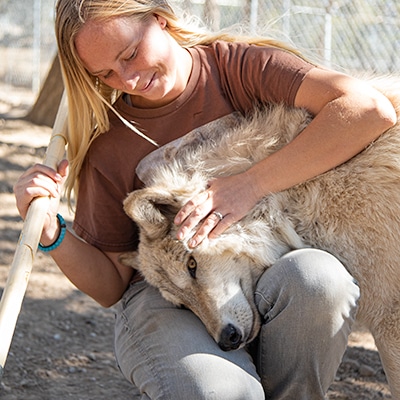 Before life at Wild Spirit Wolf Sanctuary, high-content wolfdog Irwin was born to a breeder in Ohio and sold as a pet to a private owner. He remained in his original home for the first several years of his life, raised alongside the family’s black lab, who loved Irwin like one of her own. Unfortunately, a day came in which Irwin demonstrated some undesirable behaviors toward his owner, who quickly realized that he was not the pet she hoped he would be. As a result, she began searching for a new home for him.

After several sanctuaries turned down requests for his rescue, Irwin was placed with a second owner in a private home in Oklahoma. Unfortunately, after more than a year in his new home, he once again demonstrated some unpredictable behaviors, resulting once more in the need for sanctuary placement. Wild Spirit Wolf Sanctuary was initially contacted and asked to take him in, but at that time we did not have any single females that staff believed he might be compatible with. As a result, his request for rescue was declined.

Months later, however, we found a potential opening for handsome Irwin. As fate would have it, our lovely high-content wolfdog Naia had been removed from her shared habitat with Arctic wolf, Flurry, as the two had become incompatible as Naia grew older. As such, we began to consider a new companion for her and Irwin came to mind immediately. Being much younger than Flurry and with higher energy and (ideally) greater patience with Naia, we hoped that the two might be a great fit!

“Operation Irwin” took place in October of 2020 when staff set out on the two day journey to retrieve our new rescue and bring him back home!

During the drive it was difficult to get a proper feel for Irwin, and though he did eventually warm up enough to allow staff to pet him through the chain-link, it was still unclear what his response to new people and animals might be. But upon arrival at the sanctuary, Executive Director Brittany was able to take his leash and lead him from the rescue van and into his new enclosure without issue.

Irwin was strategically placed in an enclosure right next to Naia’s, allowing the team to watch their interactions through a shared fence-line before fully introducing them a couple months later. After just a few short play-dates, Naia and Irwin were moved to a large enclosure right on the tour path, where they are now living together happily.