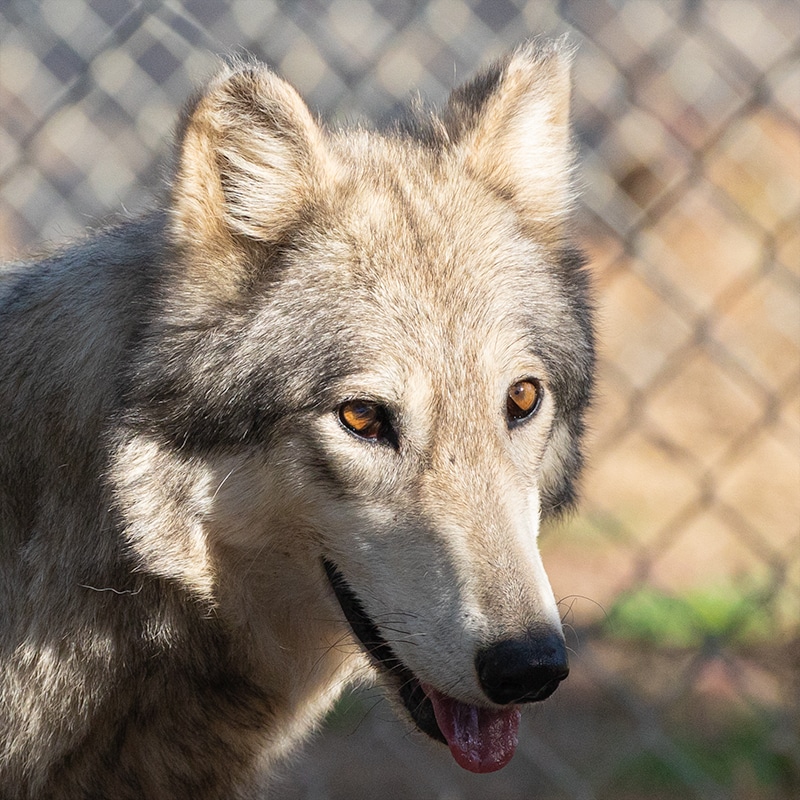 She is roughly 6 years old and her birthday is around May, 2016.

You can see her on the Tour Path!

In October of 2022, Wild Spirit was contacted by a couple in Ohio that was in urgent need of placement for their 5 wolfdogs due to a recent incident involving one of the canines (Kitana) and their new pony, who she attacked and might have killed if the owners hadn’t been there. They explained that in all the years Kitana had lived with them, she had never bothered the horses, but since the ponies arrived, she had begun attempting to escape from her enclosure to get to them. While none of the other wolfdogs had been involved in the incident, the couple couldn’t take the risk of an escape, or another attack, and hoped to find placement for all the wolfdogs if possible.

After requesting additional information, we learned that Kitana lived with her brother, Sirius, both of whom were estimated to be around 11-years-old. After sharing their lives for nearly a decade, the two were incredibly bonded, so their owners wanted them to remain together if possible. We completely agreed that separating the pair would be devastating to their quality of life, and immediately agreed to take them.

Next, we were told about Enya, an approximately 5- to 6-year-old single female, and the daughter of Kitana. The owners explained that as Enya got older, she began to demonstrate same-sex aggression toward other females, causing her to try to kill several other animals that she had previously had no issues with. Unfortunately, this is extremely common among higher-content wolfdogs, especially females, but with no available male companions on the property, she was forced to remain alone. Knowing we had several single males at Wild Spirit, we decided Enya would make a great addition to our “pack,” and agreed to take her as well.

Unfortunately, limited space is a common issue for any sanctuary, and Wild Spirit is no exception, so we were unable to offer placement for the 2 remaining wolfdogs. However, because the pillars of our Mission Statement are Rescue, Sanctuary, and Education, we always do what we can to save lives, even when we can’t physically take them. So, we reached out to several other wolfdog rescues, and are grateful to say that a home was found for the other two!

The trip from New Mexico to Ohio had an eventful start, with our rescue van getting stuck on the side of a gravel road due to heavy rains the night before. Thanks to the high volume of clay in our soil, rain doesn’t cause our dirt roads to turn into regular mud, but into something more akin to peanut butter in consistency, and we found that even our 4WD truck wouldn’t be able to pull the van out. Instead, we were forced to resort to using the sanctuary’s backhoe, which finally did the trick!

After losing over an hour of time, we were finally on the road! Thankfully, the remainder of the trip was uneventful, plus or minus the rainstorms that followed overhead for most of our journey.

When we arrived at our destination, Kitana, Sirius, and Enya were leashed and loaded into the Rescue Van without any issues, and after another 24+ hours, we were finally back home.

At this time, Enya is still waiting to meet her perfect match, but we have no doubt she’ll find him soon enough. She is also much more shy toward our Animal Caretakers than Kitana and Sirus, but after seeing how social she was with her former owners, we have no doubt that she’ll warm up with time! 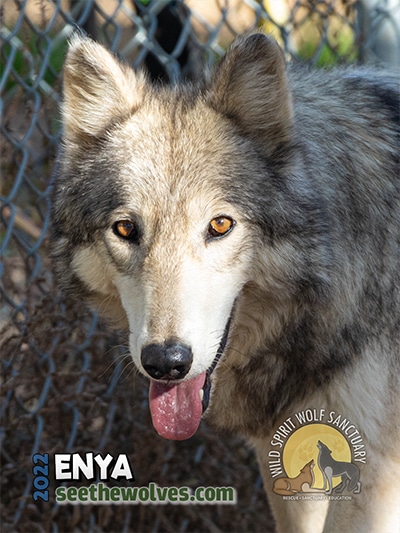 Enya has no sponsors!