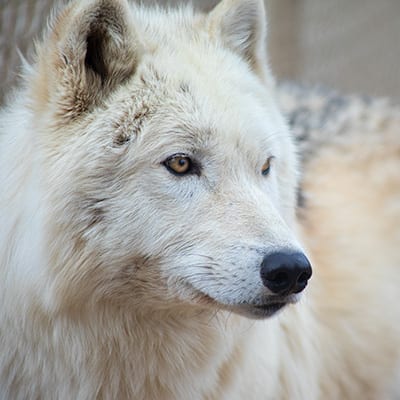 Crow is a high-content wolfdog. He is roughly 8 years old and his birthday is around April, 2014.
NOT on the Tour Path
Enrichment eligible 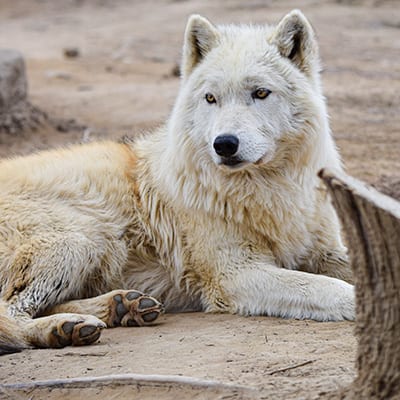 Crow was rescued in April of 2018 when he was four years old along with three other high-content wolf-dog boys: Chiracowa, Bear, and our late senior Sioux. All four animals hail from Minnesota, and were a breeder surrender. Crow is neutered and in excellent health. 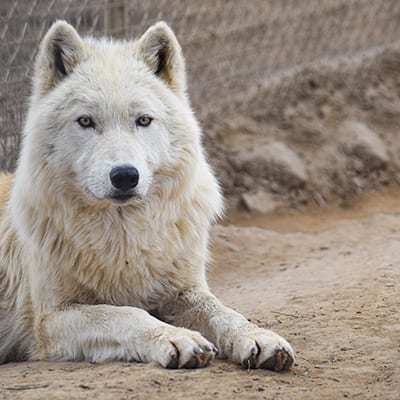 Gentle and sweet, Crow is quite the gentleman. While he can by shy and cautious to trust new people, Crow really enjoys socializing with caregivers. Unfortunately, his requests for attention are subtle, and people have historically had difficulty reading him correctly.

Crow shares his habitat with low-content wolf-dog, Honey, who has been his companion since he was rescued in 2018.

Crow has proven to be one of the only rescues to consume pretty much anything and everything offered to him, and he does so zealously. Whether it be chicken, beef, elk, rabbit, or an orange, Crow does not discriminate when it comes to food. In comparison, most of our rescues outright refuse to eat rabbit. 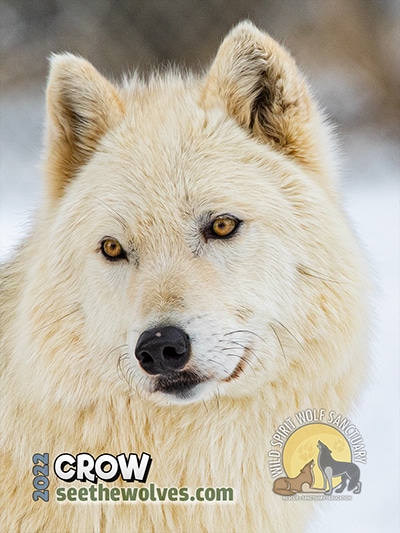 Crow has only 4 sponsors!

Aside from his obsession with food, Crow greatly enjoys sharing fence lines with his former pack-mates Chiracowa and Bear, receiving face massages from his primary caregiver, Kendra, and investing new things, such as enrichment treats.

Crow is not a fan of sharing his favorite people with Chiracowa, and he has been known to whine and complain when primary caregiver, Kendra, visits Chira. Also, being a food obsessed guy, Crow does not like sharing treats or bones with his friend, Honey. Luckily, Honey does not particularly mind. 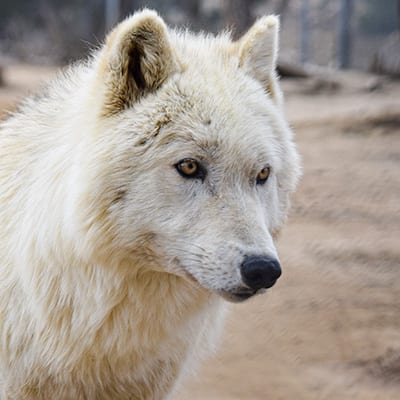 Crow’s story is a very controversial one with many different versions depending on who you speak with. However, what we know for certain is that Crow was bred in captivity to make money for his owner. He was born at an animal fur-farm-slash-petting-zoo where the owner charged visitors different fees to interact with a large variety of wild animals. Although, a DNA test revealed that her “wolves” were actually high-content wolf-dogs.

The owner faced controversy and court battles for many years. She was even shut down for a period of time before re-opening in 2016. Visitor reviews were mixed–some who ventured to the farm gave it a good review, citing kind staff and well-cared for animals, while others expressed the opposite, citing small cages and horrible conditions.

The owner made no secret about breeding and selling wolf-dogs for profit, or about selling “wolf” pelts, which she stated only occurred after a wolf-dog on her property died of natural causes. However, several articles about her farm quote her saying the opposite in her deposition for her court case where she admitted that she waited until winter when the wolf-dog coats were at their most beautiful before slaughtering as many as the fur market dictated. When answering the question of how many wolf-dogs she would slaughter, the owner admitted she had already killed two and planned to collect a total of twenty-seven more over three weeks.

In 2018, the farm was again facing time in court with more nuisance complaints and rezoning issues. Wild Spirit Wolf Sanctuary received reports about the highly-contested court battle and the possibility of all her animals needing relocation. Leyton J. Cougar, Executive Director at the time, made contact with the owner to get more information to determine the details for a potential rescue mission. Ultimately, the woman lost her case and Wild Spirit Wolf Sanctuary was able to offer a permanent home to four of the animals, male wolf-dogs Crow, Walking Bear, Chiracowa, and the late Sioux.

Fortunately for all involved, the four wolf-dogs were extremely social and comfortable around people. Loading them into the rescue van was much easier than normal despite the boys having never left their enclosures before never mind the fact that not once had they been on leash.

Before arriving to the sanctuary, the four rescues were taken to Canyon Crossroads Animal Hospital to be examined and neutered.