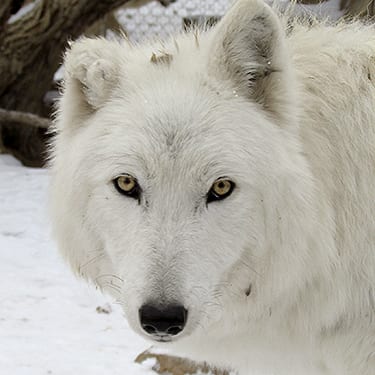 Brienne is a high-content wolfdog. She is roughly 17 years old and her birthday is around May, 2005.
NOT on the Tour Path
Enrichment eligible 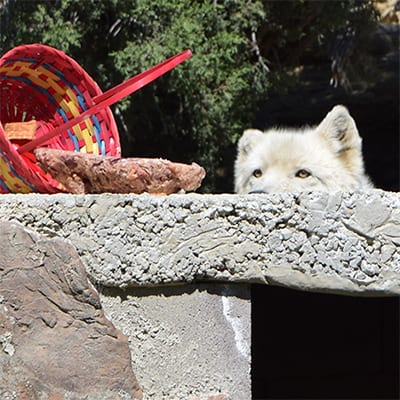 Brienne is a female high-content wolf-dog who was rescued from horrible conditions at a breeder in Iowa in 2012 when she was at least 4 years old. 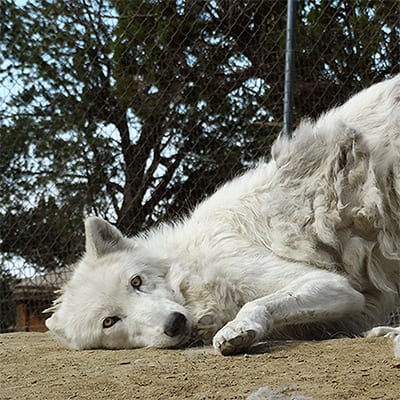 Brienne has always been a shy girl who prefers to keep her distance from people in general. She has come a long way since she first arrived at Wild Spirit Wolf Sanctuary and is now more comfortable with people, but does not allow anyone to really pet her. She will come close enough to sniff, and sometimes tries an exploratory nip or two.

For most of her time at Wild Spirit Wolf Sanctuary, Brienne lived with a large pack that included fellow Iowa rescues, Ghost and Arya. In early 2017, a fight with Arya resulted in Brienne’s removal from the pack. She lived with Summer, another wolf-dog from the Iowa rescue, until he joined the Big Pack in the Sky on May 16th, 2019. Brienne is not on our tour path because she is so shy, but you can ask to visit her on a special tour.

Brienne is missing her right ear. Several of our other rescues have lost their ears to fights, and we guess that is how Brienne lost her ear, but no one knows the real story. 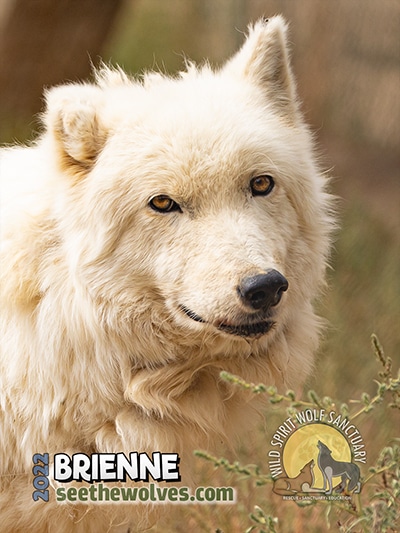 Brienne has only 6 sponsors!

Brienne likes to carry things around in her mouth like food or toys, and she loves making her neighbors jealous of whatever she has. She really enjoys her quarterly enrichment treats.

Brienne dislikes large groups of people near her habitat. She also can’t stand when neighbors receive bones and she doesn’t! 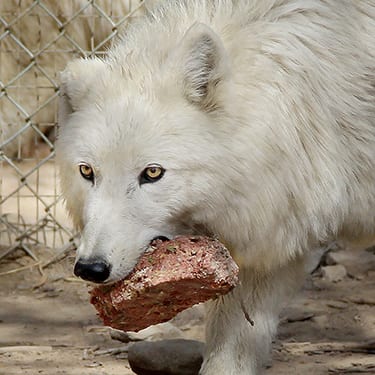 Brienne was born into horrible conditions at a breeding facility in Iowa. The original owner/breeder had passed away after a lengthy illness, and her surviving family was having a difficult time caring for the 12 high-content wolfdogs that she had left behind. Before passing, the breeder had kept her animals in 10′ x 20′ cages, some with up to three animals inside. The cages had cement or plywood floors and only 6-foot-high wire ceilings. Sadly, these are the typical conditions for wolves or high-content wolfdogs kept in captivity, since these animals can easily dig or climb out of the average yard or enclosure.

After the breeder died, no one ever went into the cages and the poor wolfdogs never went outside. The small enclosures were cleaned with a hose from outside, and years of waste had collected in piles around the edges. No one remembered their names or how they were related. They were not spayed and neutered, so each year more puppies were born. Few of them ever survived.

Eventually, a family friend stepped in to try to help take care of the animals and called everyone he thought might be able to assist. Unfortunately, no one was able or willing to take on so many animals. Luckily, he didn’t give up and finally called Wild Spirit. We immediately prepared to make our first trip to Iowa to assess the situation, but before we arrived, the oldest male of the Iowa 12 had passed away.

During the assessment trip, we quickly saw how serious the situation was for the 11 remaining wolfdogs. Wanting to help any way they could, the family generously offered all of their chain link fencing and hardware to help with the building of the Iowa Rescue habitats. Before leaving to return home, our staff loaded Cassie, the oldest female wolfdog, into the van and took her to Canyon Crossroad Vet Hospital. She received an extensive exam and the immediate care she needed, and then she came home to rest safely at the sanctuary. She passed away in the winter of 2012.

In September of 2012, Wild Spirit staff went back to Iowa to rescue the remaining 10 wolfdogs. At midnight on September 17th, the Iowa 10 stepped foot onto the soil of their new habitats. It was the first time they had felt the earth beneath their feet in at least three years! Vet visits revealed they were malnourished, heartworm positive, and had brittle bones and teeth. Due to their age and poor health, we chose not to have some of the Iowa girls spayed, but the boys were all neutered (neutering is often an easier, less invasive procedure with significantly lower risk for the animal). All of the Iowa 10 were given proper medication for their many health issues, put on a healthy diet, and finally received the care they needed. After 3 years with no space to run, they all ran a bit oddly at first, but with time they’ve adjusted to their new life and home. They have all become much stronger and healthier, although they have had some drama due to shifting pack dynamics and further health issues.

In the summer of 2013, George R. R. Martin’s wife, Parris McBride-Martin, named all of the Iowa kids after GRRM’s characters from his well-known book series, Game of Thrones. The Iowa 10 were then known as The Westeros Pack. The Martins have come to visit them and Mr. Martin even loaned his star powers to a fund-raiser to build the pack a brand new habitat! With Mr. Martin’s help, we raised $150,000 to build larger habitats for this deserving family.

Brienne is the last remaining member of the Westeros Pack, and the oldest rescue at the sanctuary. To this day she remains shy but bold, walking right up to our Animal Caretakers but never quite close enough to touch (at least, not in a way that is safe for our fingers!). Despite her age and long history of health conditions, she still has a lot of fire in her soul!