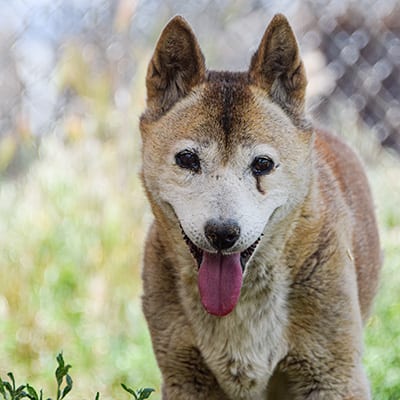 Foxy is a New Guinea singing dog. She is roughly 12 years old and her birthday is around November, 2009.
On Tour Path
Enrichment eligible 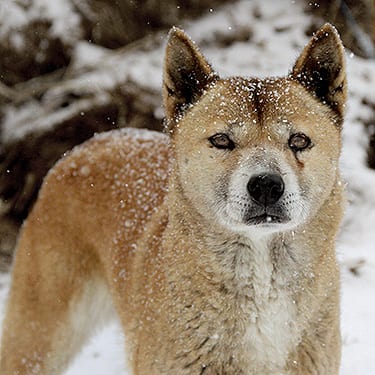 Foxy is a female New Guinea singing dog. We rescued her in 2010 when she was around two years old. 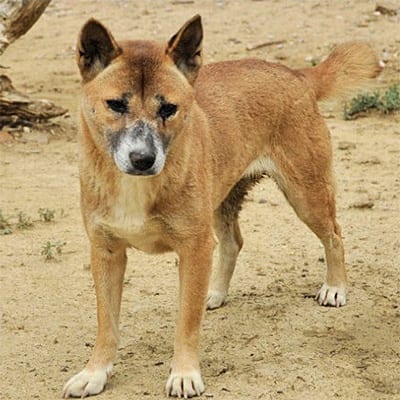 Foxy is our shyest New Guinea singing dog. Our beautiful girl is very serious, has some battle scars on her face, and usually looks very worried. She will come up to some of her caretakers, but she doesn’t like to be touched.

Foxy lives with New Guinea singing dog, Bowie. She was once the “Queen” of her habitat when Foxy, Bowie, Bono, Princess (Foxy’s daughter) and Reba all lived together. However, over time she has kicked all of them out, except for Bowie!

Foxy was featured on the Norwegian television show, “Wildlife Vet” when the popular program was filming an episode at Wild Spirit the same week she arrived. We respected her shyness and let her sit in the travel crate, even after the lid was removed. 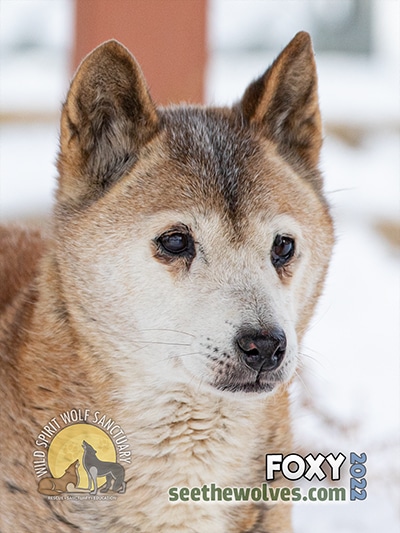 Foxy has only 7 sponsors!

Foxy loves Bowie. She also enjoys sneaking up behind her caretakers and checking them out with her nose while their attention is focused on Bowie.

Foxy, like all our Singers, is startled by sudden movements. She doesn’t like to be touched and although we’ve tried, we can’t take her for enrichment walks. It upsets her when Bowie goes for a walk and howls for him to come back while he is gone. 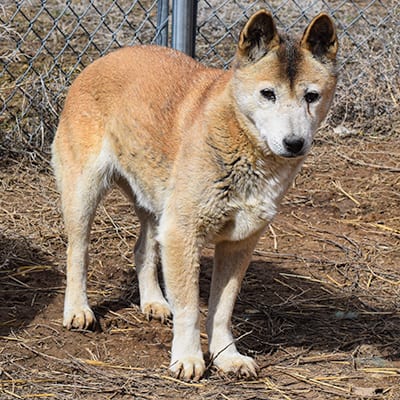 Some consider the rare and wild canines, the New Guinea singing dogs, to be most like dingoes, but others report that they have completely unique DNA. They get their name from their equally unique howl which is nearly impossible to describe. Some say it sounds like a barbershop quartet, and others describe it as an ethereal trill. When we rescued Bono, we heard there were less than 200 New Guinea singing dogs in captivity, and that they may already be extinct on their native island of Papua. We read that on the island, Singers were seen more in pairs than in packs. For 30 years now, no one in their native country has seen them at all, although they report hearing them sing.

Foxy’s story begins with a Pennsylvania man who bought a breeding pair of New Guinea singing dogs from a flea market. That same year, he obtained another pair from a kennel that had been shut down by his state. By October of 2010, he had over 80 Singers. They endured unsanitary, makeshift living conditions, including a half dozen adults housed in travel crates stacked on top of one another. The press secretary for the Pennsylvania Department of Agriculture said that, aside from not holding the proper licenses and not vaccinating his Singers for rabies, she thought the animals seemed loved and fed. However, it was clear that their owner was overwhelmed and she considered him to be a hoarder. Pennsylvania animal officials decided it would be best for all but 10 of his Singers to be placed in other homes or sanctuaries, and their owner cooperated fully. We are thankful for James McIntyre from NG Singing Dogs Conservation Society who went to assist, and Tom Wendt from NG Singing Dog International who went to the rescue and found refuge for 62 of the 88 animals. We send huge thanks to Samantha Burleson from Tom’s organization who called us several months later. Five of the Singers who had gone to Arizona now needed to be relocated again.

After all the details were arranged, Samantha’s mother Roxy drove the Singers to Wild Spirit. We were elated to welcome three girls, Foxy, Reba and Princess, and two boys, Bono and Bowie. Foxy was 2-years old in and the others were only one in 2010. They all had the unusual luxury of being examined by Silje, the celebrity “Wildlife Vet” from Norway only moments after they arrived. We have done no official research so far, but in our professional opinion, Singers are capable of giving you an extreme case of “Too Cute-itis.” They will steal your heart in approximately 18 seconds. As adorable as they are, the folks who know Singers best, including the man who was hoarding them, all agree they are not good pets and of course all wild animals want to be free to live their lives in the wild and not in captivity.

We’ve already had to do some rearranging with our five Singers. Princess and Reba suffered a few bloody bites and had to be removed from the original pack of five and now they live with Bono. Beautiful Foxy is Princess’ mom and lives with our other boy, Bowie. While living in Arizona before coming to WSWS, the Singers picked up Coccidioidomycosis fungus (Valley Fever). They all had to take oral Fluconazole for a full year and Bono’s shoulder was temporarily damaged. Now, they all take “No Scoot” fiber supplement to help with impacted glands. Our new kids have already been “fixed.” Because they are inbred, none of the rescued Singers could have been good candidates for any kind of conservation breeding program. On the lighter side, they quickly fell in love with staff and volunteers.