Rest in Peace: Shaggydog and Shae 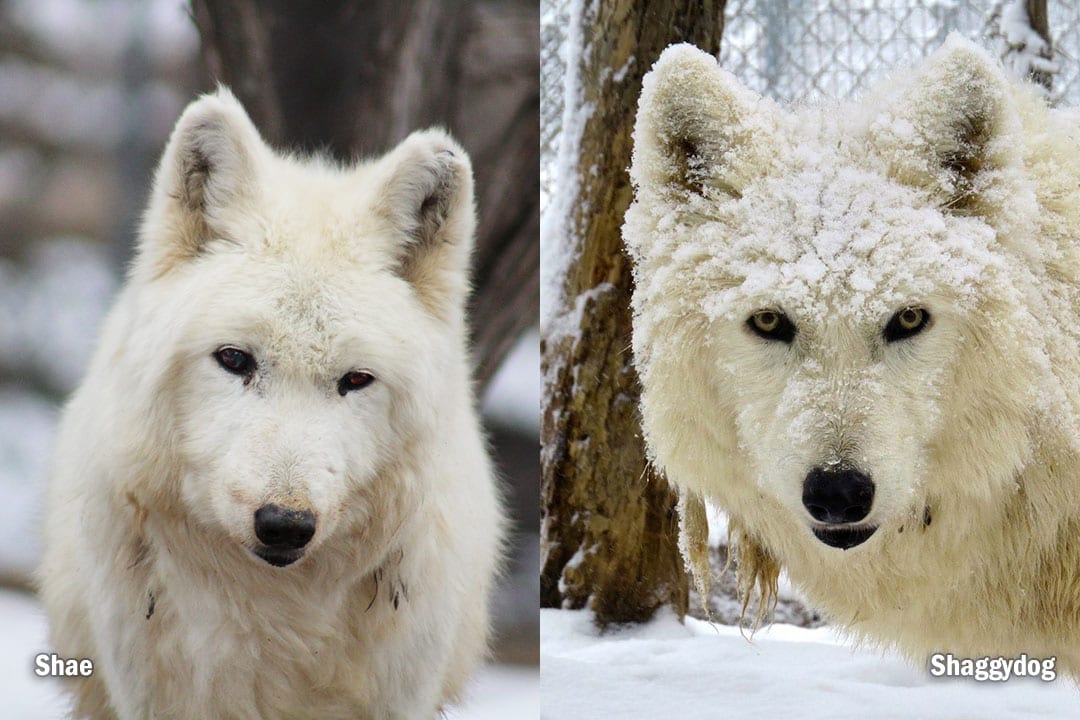 Kendra is our Grant Coordinator and Copy Editor, as well as an Animal Care Specialist. She is an animal behavior enthusiast, greatly enjoying the impactful relationships possible through training as a means of communication and building trust. Through her love of writing, Kendra hopes to further support the wild rescues of Wild Spirit Wolf Sanctuary.

Shaggydog and Shae were the last living members of Shaggydog Pack, which originally included rescues Summer and Jon Snow, as well. All four animals were rescued in 2012 from a breeding facility in Iowa where a total of twelve high-content wolf-dogs were living in horrid conditions—crowded cages with cement floors, no enrichment, and very poor diets.

Naturally, the twelve animals were warmly welcomed to their new home at Wild Spirit, and not too long after they were respectively deemed the Westeros Pack after George R.R. Martin’s “Game of Thrones” novels and HBO show. With this association, the twelve rescues gained quick popularity.

The Westeros Pack split into several smaller groups, and all had their own hierarchy, quirks, and personalities. Shaggydog was the male alpha of the pack with Shae as his female equal. In their younger years, both Shaggydog and Shae were the most likely to interact with their caretakers. As shy and typically indifferent high-content wolf-dogs, their interactions with humans consisted mostly of hand-sniffs and maybe the acceptance of a light touch under the chin. Due to their anxious and aloof natures, the Westeros were kept off of the tour path, and it was clear they enjoyed their space on “The Hill.”

As Shaggydog Pack grew older, health issues started to afflict the animals: Shaggydog lost his rear left leg, Summer had to have his left eye surgically removed, and more recently, Shae had her left eye surgically removed due to an unknown medical condition—all of these afflictions affectionately gained them the in-house nickname of “Pirate Pack.”

As their caretaker, I only got to know them in the last eight months of their lives. During this time, they were curious about me, though remained cautious and shy. Several times, I was able to touch Shaggydog under the chin. Unfortunately, I did not get to personally see their vibrancy, but instead their decline as elderly (over 12 years old) wolf-dogs.

Shaggydog did maintain his integrity and personal strength until the end, and he was stubborn to accept that his body was failing him. He was always strong and noble, which is very suiting to a pack leader. Shaggydog slipped into death with grace and bravery despite the wish to push on.

Shae’s unknown medical condition, which caused the loss of her first eye, ended up attacking her second eye late last year. Despite being totally blind and mostly deaf, Shae never lost her appetite, and she enthusiastically carried bones around by the fence lines to show off to her neighbors. Shae, you goofy, shy girl: You will be missed.

While it is always painful to see an animal pass, it’s considerably worse to watch them suffer. I am blessed to have had the time I did with Shaggydog and Shae, and I’m glad they can run free with their Westeros Pack in the next life.

← Prev: Changes to the Wild Spirit Wolf Sanctuary Team! Next: Rest In Peace: Tia and Juan →
You May Also Like…