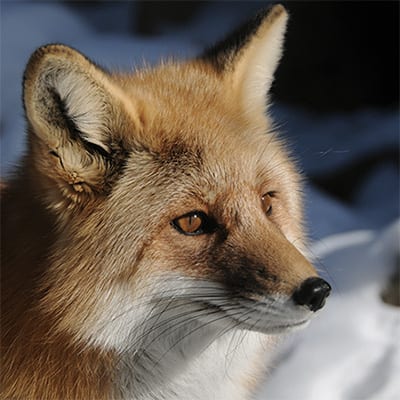 Romeo is a fox. He is 14 years old and his birthday is April 19th, 2006.
On Tour Path
Enrichment eligible 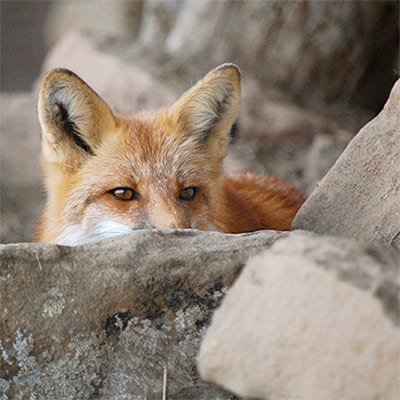 Romeo is a neutered male red fox. We welcomed him in the fall of 2008 when he was around two years old. 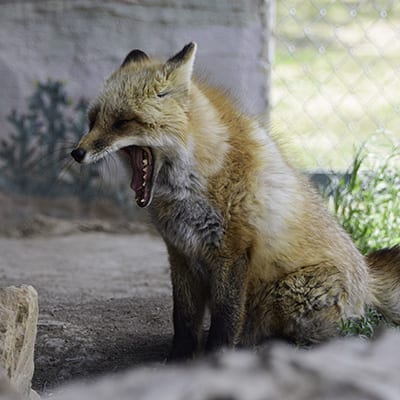 Romeo is one of our most beloved rescues because of his loving and social personality. He adores people, but he retains his wild spirit. He loves attention but will not hesitate to tell you when he’s had enough.

Foxes spend most of their lives living alone, so Romeo is happiest living by himself. We also make sure he gets lots of attention from our human pack. He also loves greeting our guests on tours, so be sure to say hello!

Romeo gets a bit dramatic when people he loves have been away for a while. He has the most adorable protest cries, and it takes him a while to “get over it.” 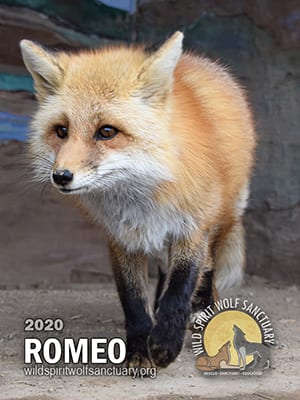 Romeo has only 3 sponsors!

Romeo’s diet is more diverse than our other rescues. He loves eggs, peaches, and apples. He likes to play hide and seek and when he’s very close with someone, he’ll even ask for belly rubs!

Romeo does not like wolves and wolf-dogs! If one of our rescues is walking past his habitat, he will puff up his fur, show his teeth and scream at them. 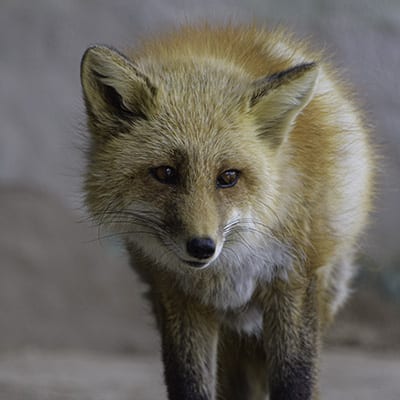 Romeo was found on the side of a road when he was around two months old. Tragically, his mother had been hit by a car and killed. A kind woman who saw the poor little kit took him home, cared for him, and did the best she could to give him a good life. However, she quickly realized how much work it would take to raise a baby wild animal, and also learned that foxes smell like skunks! She called the Department of National Resources (DNR) to see if they would take over Romeo’s care.

The DNR took care of Romeo until they thought he was old enough to be released into a national park. Unfortunately, Romeo had become so comfortable with humans, he kept approaching people at the picnic grounds. The DNR knew this would make his survival much more difficult, and they felt it was unlikely he could ever fully re-assimilate to the wild. They recaptured Romeo and contacted Fejervary Children’s Zoo in Iowa. Romeo was moved to his new home at the zoo where he lived next door to four wolves.

When Romeo was around two years old, the Fejervary Zoo began having trouble with funding and community support. With a plan to relocate their exotic animals, they called Wild Spirit. The zoo asked if we had a place for the three remaining wolves who lived next to Romeo and were now looking for a new home.

We agreed to take the three older wolves Akela, Brutus II and Navar. When our staff arrived at the zoo, they also met Romeo and quickly fell in love with the charming little fox. Considering that the zoo was experiencing funding issues, we offered to take Romeo if he ever needed a place to go. Sadly, the zoo eventually had to close completely, so they called Wild Spirit and asked us if we still wanted to give Romeo a home. Of course, we did!

Welcoming Romeo to Wild Spirit took some time. First, we had to get a special educational animal license to qualify to be Romeo’s new home. We also wanted an enclosure that would fit his unique habitat needs. We spent the summer building a beautiful custom fox habitat and waiting for our license to be finalized. All our volunteers and many of our supporters came together to create a beautiful space complete with a fountain, stream and custom mural! Finally, Romeo was escorted to New Mexico by his zoo friends and welcomed into his new home, where he would live across from his old neighbors, the pack of wolves. To everyone’s amazement, Romeo’s old friends ran to their fence line to greet him and howl a welcoming song. Watch the amazing moment below!