In honor of Valentine’s Day and February as the “Month of Love,” the Wild Spirit Team chose a young canine couple to spotlight for this segment of the Peek Into the Pack.

Lobo is a two-year old male high-content wolf-dog who was rescued in September of 2018 from Arizona where he had been wandering around a woman’s farm. Concerned that her neighbors may not be so tolerant and welcoming of the wandering wolf-dog, the woman made arrangements with the organization Humane Animal Rescue and Trapping Team (HARRT) to have Lobo captured and relocated to a sanctuary. For about two months, while a permanent home was being sought, Lobo was housed in an empty bear habitat at the Southwest Wildlife Conservation Center located in Scottsdale, Arizona. At the time, the Wild Spirit Team was keeping eyes and ears out for a male companion for one of our single females. After learning more about Lobo, it was agreed that he would be welcomed to Wild Spirit to eventually live with miss Flicker.

Lobo is a rather shy fellow, extremely observant, curious, and intelligent, with a seemingly endless supply of playful energy. He adores teasing and prompting his companion, Flicker, to wrestle and run around with him. When Flicker tries to ignore Lobo, he can be seen gently nipping and tugging at her fur or tail in a silent plea for her to engage.

When Lobo first met Flicker, he was quite nervous. He paced around the habitat, checking it out, while tossing quick backward glances at Flicker who trailed not far behind him—she, after all, was ecstatic with the entrance of her new male companion. From the beginning, Flicker was smitten with Lobo and wanted very much to interact with him. The moment he finally returned her interest, sniffing at her butt for the first time, Flicker’s face was taken over by the largest smile. You could practically hear her squealing with delight!

Over the time Lobo and Flicker have lived together, the two have closely bonded, and it is obvious they enjoy one another’s company. Flicker in particular exhibits confidence in the relationship, and has subsequently taken on “the boss” role. Lobo will often look to Flicker for cues whether a new situation is worth fretting over, though his own confidence has been increasing where he relies less and less on her opinion.

Flicker is a three-year-old female low-content wolf-dog. Originally adopted by a woman from an obscenely abominable breeding facility in California where the number of unkempt, ill-suited-to-the-elements enclosures stretched as far as the eye could see, young Flicker was one of the lucky few to escape the inhumane conditions. Unfortunately, being a wolf-dog born to a stressful environment, Flicker was incredibly anxious, prone to escape, and unsuitable to life as a pet, which one can expect of a wolf-dog. Realizing that she could not keep Flicker, the woman reached out to the Sanctuary. We then rescued her in March of 2017.

One of the first things people tend to notice when they meet Flicker are her exceptionally large ears, which are greatly expressive. If you want to know what kind of mood Flicker is in simply look at the position of her ears and you’ll know. A more confident animal than Lobo, she is still shy with new people, and from caretakers she is typically satisfied with just a hand-sniff or a small scratch under the chin.

As a very curious and playful animal, Flicker adores fence-fighting with visitors to the One Acre habitat, which borders her home. She loves it so much that she will use her body to block Lobo from taking away any of the action. She can be a bit of an attention hog, and she prefers to have things her way.

Prior to matching with Lobo, Flicker was quite flirtatious with other male rescues at the Sanctuary. She was especially fond of Flurry, a 12-year old Arctic wolf. Now with Lobo, however, Flicker has shown much less interest in the other guys, and it is clear that she simply adores her handsome companion.

The Wild Spirit Team looks forward to watching these two continue to grow as both individuals and as a couple, and we welcome you, dear Howling Supporters, to follow their journey.

Latest posts by Kendra Kain-Woods (see all)
8 Ways You Can Help! 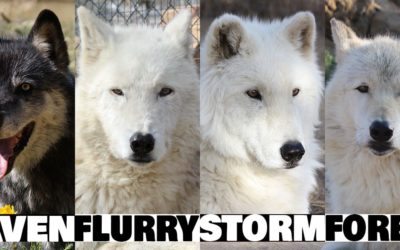 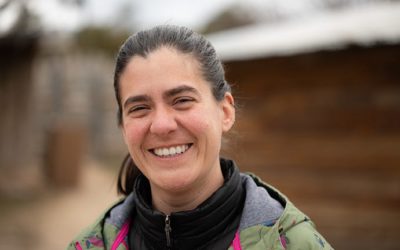 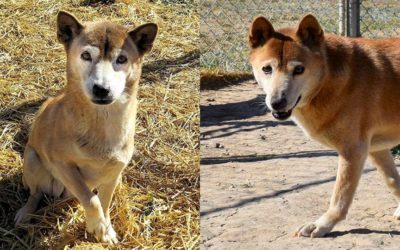