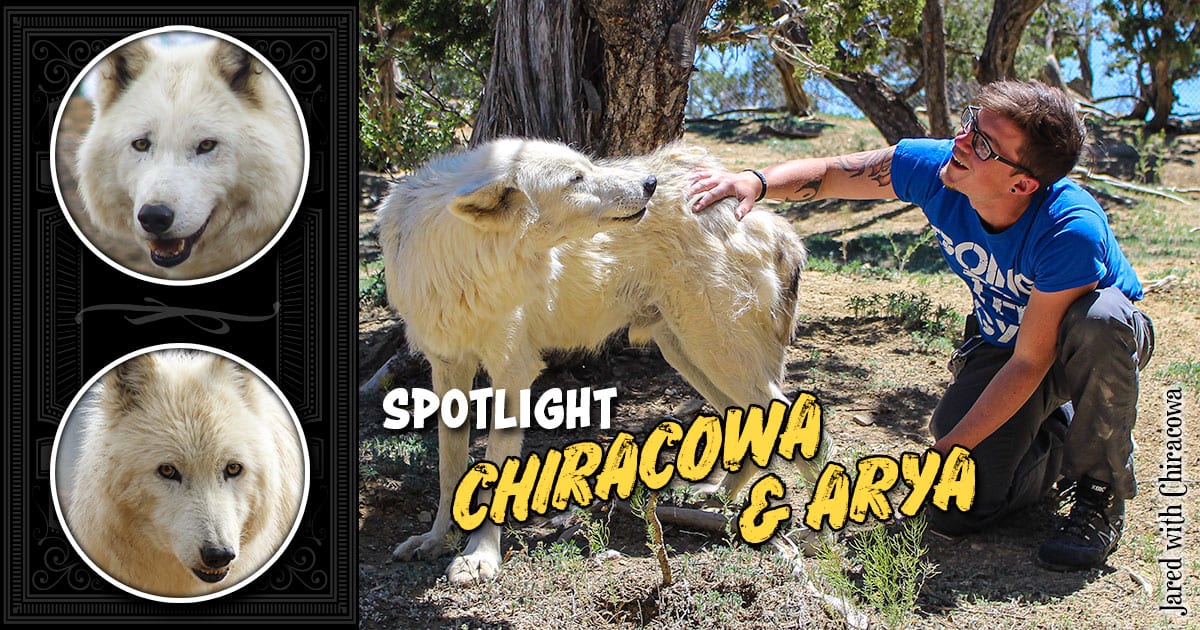 Chiracowa (a.k.a. Chira) and Arya are probably the goofiest couple that I have had the pleasure to work with since coming to Wild Spirit Wolf Sanctuary last June. When I was first introduced to Chira, I was explicitly told that I needed to set boundaries. While he is a super social fella, his zeal to greet and interact with caregivers can lead to poor and unwelcome behavior. For example, Chira has been known to get a little nippy, snagging at clothes or accidentally knocking his teeth against your chin when allowed to kiss for an extended period. This is especially true if he’s over-the-moon-happy to see you, and sometimes Chira just can’t contain his excitement. Clothes being stolen from caregivers, or at least the attempt at theft, was not historically uncommon for Chira either! 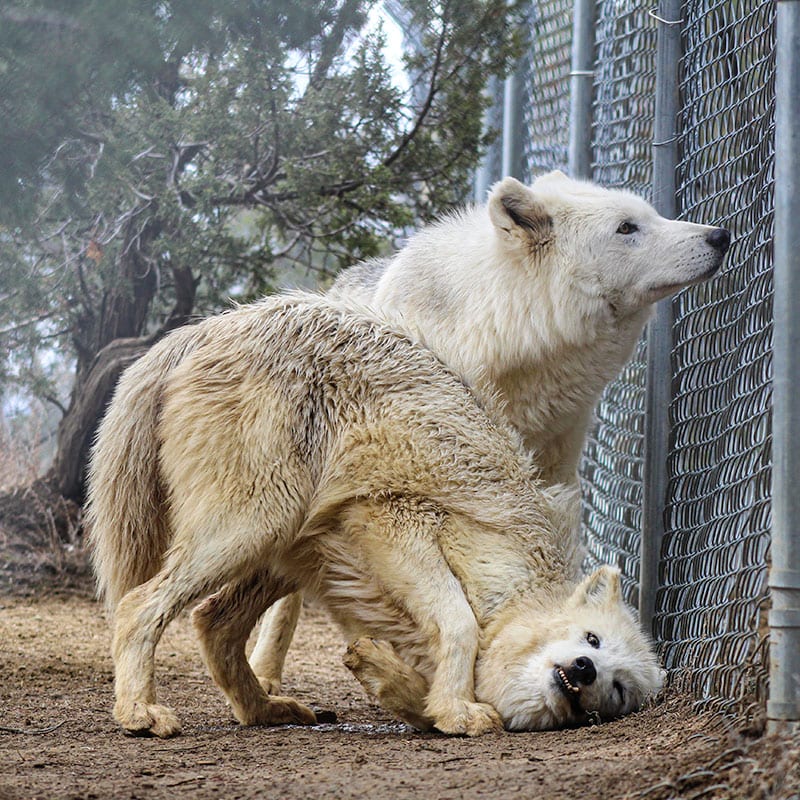 My first interaction with the large “floof” that is Chira went very well. While he did show subtle signs that he wanted to test me, the true test did not come until I had completed my training on Chira and Arya’s habitat and faced the ardor of Chira alone. While he was licking me on the arm, Chira decided to flea bite. His teeth did not break the skin, but it was a swift reminder about the powerful critter I was befriending! I quickly told him, “No” with a firm voice and stood up, thus removing myself from the interaction. I could tell Chira was upset that I was not giving him what he wanted, but from that moment on he realized I wasn’t going to be a pushover. Now, I no longer receive tugs at my shirt nor the love nibbles Chira is so fond of gifting.

While it did not take much time for Chira to warm up to me during those first few weeks as his assigned caregiver, I realized with this habitat I gained a second shadow—Arya, a member of the formerly numerous Westeros Pack, has been slow to accept me into her favor, sneaking around the trees while I cleaned and keeping a vigilant eye on my every move.

Initially while feeding her, Arya did not trust me to give her the food fast enough to prevent Chira from stealing her prized morsels. As I was still new to everything when we first met, Arya had good reason to question my abilities. There were times where she, in fact, did not get all of her meal because I was too slow to pass the slivers of meat through the fence. Recognizing I needed to step up my game, I soon honed my abilities, and confidence began to grow between us with the added comfort of the chain-link barrier. Inside of the habitat, however, was a completely different story. 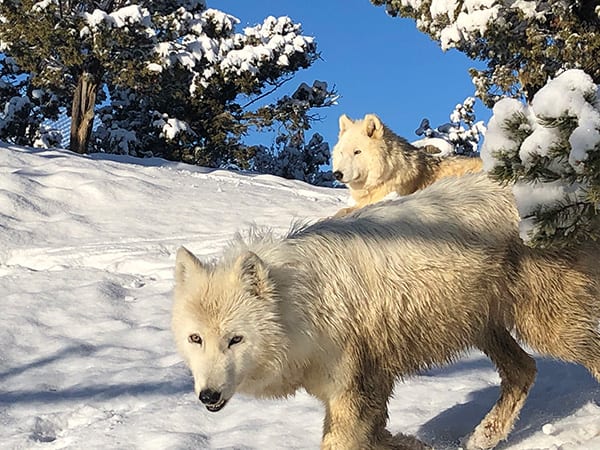 While Chira always asked to interact with me, pestering for pets, it took Arya longer to see me as a potential friend. Eventually, Arya would whine at me as she walked by asking for attention in her own subtle way, but still not trusting to inch close. After a few months, Arya began to rub against Chira while I was petting him, showing a growing comfort in my presence. In time, if I left my hand out, Arya would come up to sniff it. Although during this fragile stage, she would scamper off if she noticed I was watching her do this. Additional weeks passed, and Arya began to allow me to observe her sniffs—I was even able to venture to scratch underneath her chin!

Jump to the present, Arya now allows me to rub along the side of her head, and on certain occasions, depending on her mood and wants, I can pet her side. It’s a good reminder that just because it is allowed sometimes that it does not mean consent has been given for every time. With Arya, like every rescue, I must observe closely to see what is wanted in the moment and what is not. To listen and respect the wishes of the wild rescues helps to build trust. Communication is key, after all, for any relationship be it with another human or an animal.

I am proud to share that I have bettered my communication skills with the rescues that I care for through practice, study, and gaining clearer understanding of each individual’s needs. While I have worked with Chira and Arya for almost a year, it wasn’t until recently that I was able to hear and understand their needs and wants more clearly. Chira, for one, has been much more open with me about his feelings from day-to-day and is readily asking for specific areas to be pet and plucked as he sheds his winter coat. From the moment I walk into the habitat, Chira is trotting over, body wiggling, and sometimes “a-wooing” at me, excited to share affection. Arya picks up on this excitement and has therefore begun her own journey into furthering our relationship. As always, I will match her pace and meet her where she is comfortable. 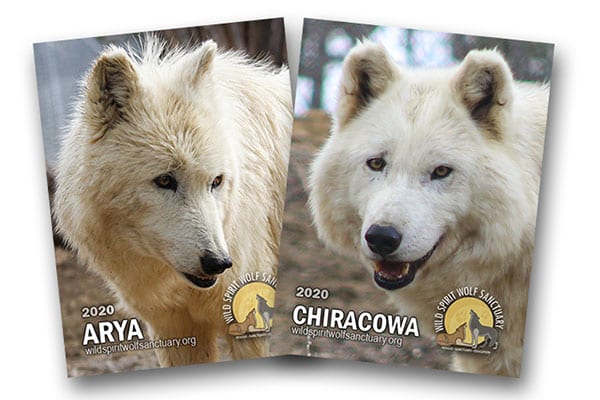 I highly recommend readers check-out Arya’s page and Chira’s page to learn more about wherethey came from, as it adds context to the milestones that have been made concerning my relationships with each. They are amazing mentors, and even better friends, and I will cherish these beautiful relationships as long as I live.

Can you sponsor one of our rescues? Please visit our online gift shop if you can help! 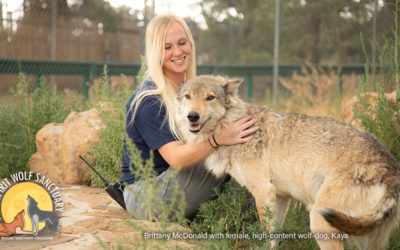 Welcome to the Team, Brittany! 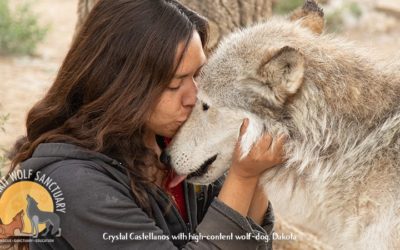 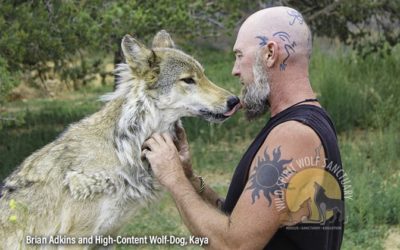