BIO ~ Agana is a high-content wolf-dog which means she looks and acts like a wolf, but has some dog in her history. We don’t know her exact age, but we rescued her in 2014 when she was at least 7 years-old. 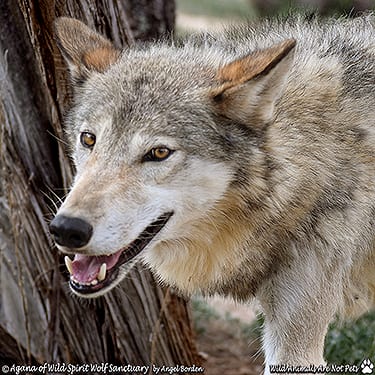 PERSONALITY ~ Agana is still shy but is also fun, flirty and very playful. She usually keeps her distance around new people. 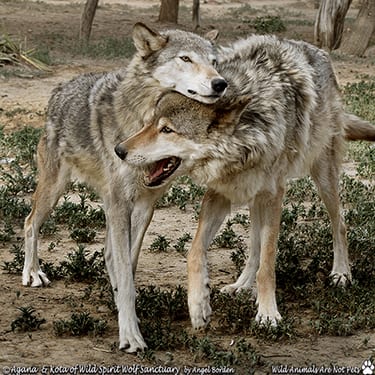 RELATIONSHIP ~  Before we rescued Agana, she lived with her sister Anole. After Anole passed away, she lived alone in a small cage for 2 years. Agana now lives with high-content wolf-dog, Kota, and they are crazy about each other. All our rescues are spayed and neutered, but life is better with a friend. 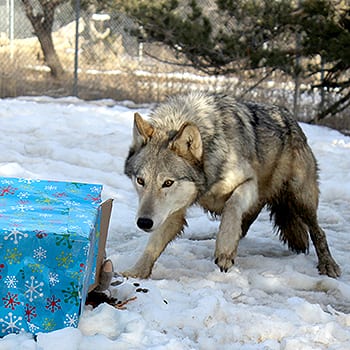 LIKES ~ Agana loves splashing in her pond and trying to catch the ravens that are brave enough to try to snatch food crumbs from her enclosure. She’s a pretty good hunter, so we hope that the ravens learn to steer clear of Agana.

DISLIKES ~ Agana hates when Kota leaves her to go out for a walk, but she doesn’t want to go along, either. She does not appreciate when her caretaker removes any ravens she managed to catch, so she will bury and guard them until she is ready to let go of her prize. 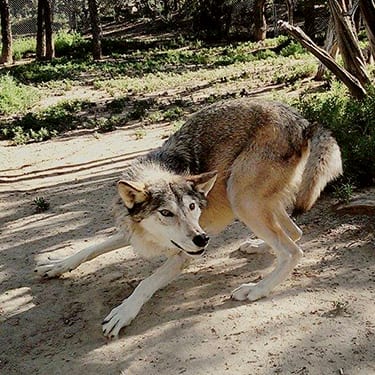 FUN FACTS ~ Agana loves to jump up and “smack” her caretaker or Kota with her front paw when playing with them. She also loves to hug her boyfriend Kota with her two front legs around his shoulders. When her caretaker scratches the middle of her back, Agana is so overwhelmed that she immediately drops into one of the quirkiest play bows that her caretaker has ever seen! 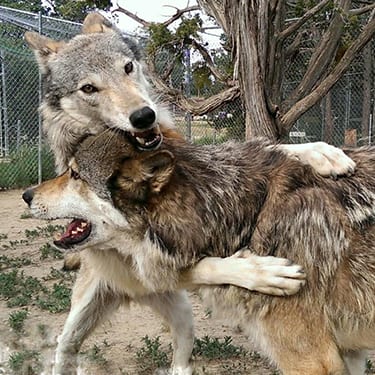 WISH LIST ~ We would love to build Agana and Kota a bigger cave house. We’ve had to make some repairs to the one they have, and it’s time for an upgrade!

Agana is Still Looking for Sponsors!

AGANA’S HISTORY ~ In December of 2014, Wild Spirit set out to rescue Agana from the East Coast and Rayne from St. Louis. Agana and her sister Anole were abandoned at her previous caretaker’s property in early 2010.  Another woman agreed to temporarily take care of Anole in a small enclosure but was shocked to discover that the previous caretaker had come and placed Agana in the pen with her. The woman lost contact with the previous caretaker for over a year but did her best to care for the wolf-dog sisters. Unfortunately, during a horrible thunderstorm, Anole passed away and Agana was left alone. The woman continued to care for Agana but had little interaction with her. She found her to be “high-strung, unfriendly and not to be trusted.”

When she first arrived at Wild Spirit, we placed Agana in the smaller section of Kota‘s habitat so they could get to know each other. She didn’t show much interest but we did see a sniff or two between them. After a few weeks, we thought it was safe to introduce Agana and Kota. Agana had to be coaxed to finally run into the main enclosure. After a few minutes of exploring, Kota and Agana seemed to fall in love.

Today, Agana is absolutely crazy in love with her Kota and he is finally back to his normal, high spirits (he was needy after losing his longtime girlfriend, Duchess). We agree with her original caretaker that Agana is aloof, but after settling down and watching the daily routine of the sanctuary, she calmed down, started to show interest in tours, and sniffed her new caretaker’s hands many times. We could see the wheels turn in her head with possible questions like,“why is Kota rolling over for humans and letting them pet him?” She was very confused at first, but as the months went by, she has learned that humans can be trusted and that getting petted feels great! We are thrilled for Agana; after losing contact with her previous owner, losing her sister, and then being alone for a couple of years, it’s a joy to see that she has found a safe, permanent place where she is understood and can be with her own kind. 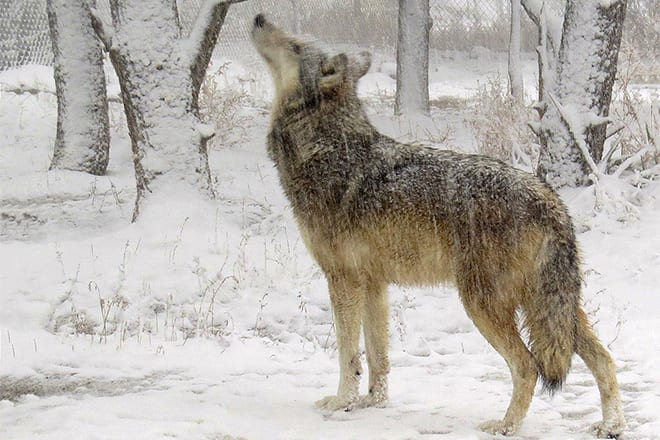 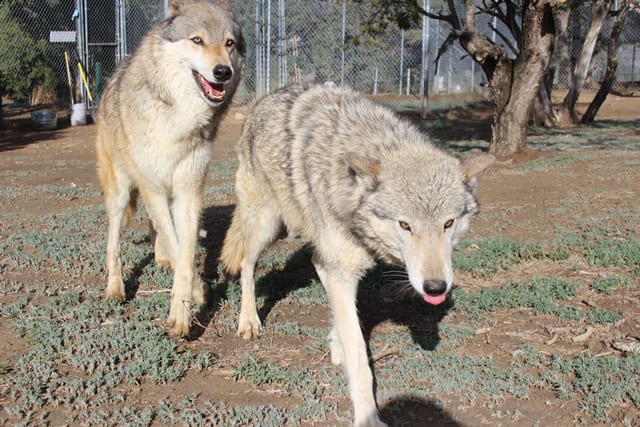 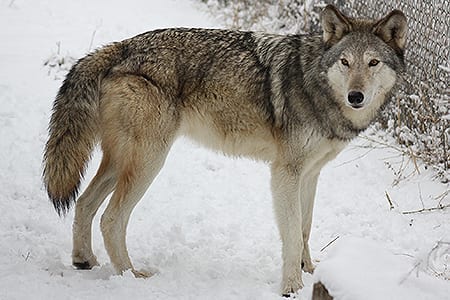 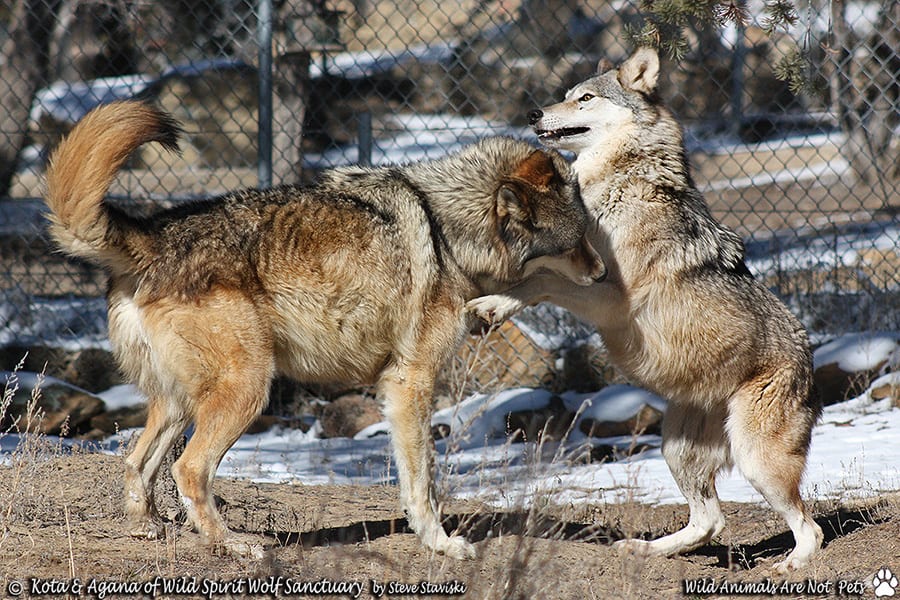 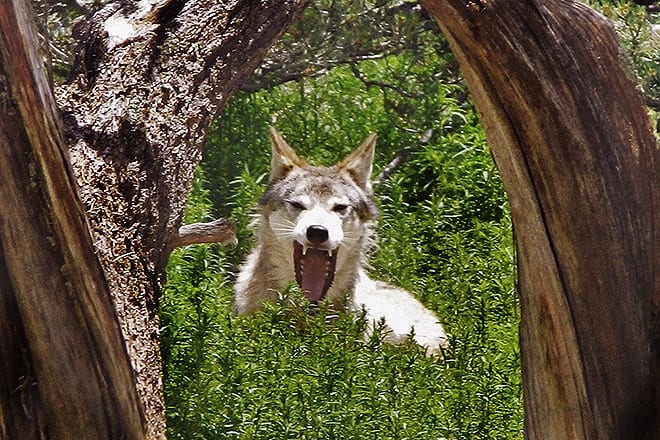 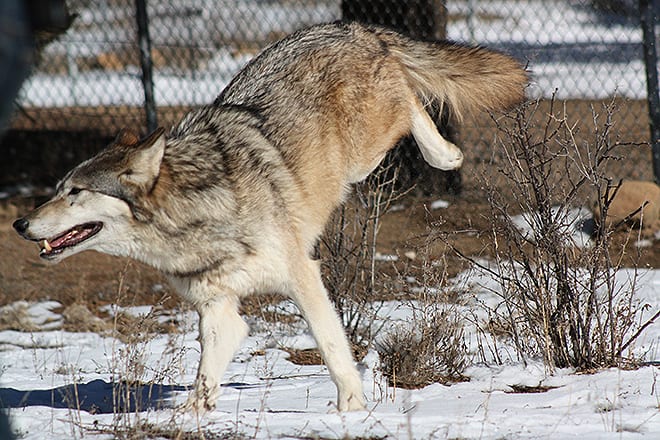 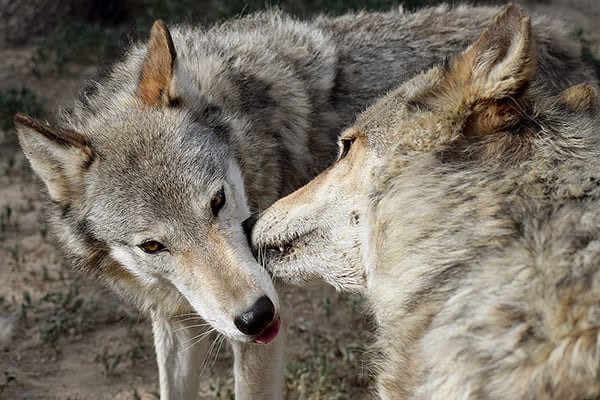